During last week’s leaders’ debate, BC Liberal leader Christy Clark packed enough into one sentence to keep a fact checker busy for a week.

Here’s what she said: “The reason we’ve been able to put so much money into infrastructure is because our economy is growing and, by the way, we are doing all of this without going into deficit, without increasing the interest that we have to pay banks overseas.”

First, giving credit where it’s due, Clark is correct the economy is growing. It has been since 2009, which was the last time it was in recession and shrank.

It’s also true that B.C.’s operating budgets have not been in deficit. B.C. has been running surpluses, but that’s only for the part of the budget that pays for day-to-day operations of the government, what finance minister Mike de Jong often compares to a family’s grocery budget.

When the government pays to build infrastructure, however, the money comes not from the operating budget, but from capital spending. Extending de Jong’s metaphor, this is more like what a family would use to buy a house or finance a major purchase. There are good arguments to take on that debt, especially at a time of record low interest rates.

And that is exactly what we do. Indeed the total provincial debt has been rising steadily and has gone up every year since 2006.

Since Clark became premier in 2011, the government has taken on $2.65 billion in debt to build education facilities, $2.1 billion for health facilities and $3.37 billion for highways, ferries and public transit.

Some debt, like the $9 billion to build the controversial Site C dam, is carried by Crown corporations like BC Hydro. But guess what? That adds to provincial debt too.

Altogether, since Clark became premier in 2011, the government has added $20.14* billion to the province’s total debt and it’s projected to hit $77.7 billion by 2020. That’s more than double the $33.8 billion the province had in debt when the Liberals came to office in 2001.

So to whom do we owe interest on all that debt? Is it, as Clark suggested, banks overseas? A bunch of shady foreigners in suits just waiting to foreclose and kick us out of our schools and hospitals?

The truth is, not even the finance ministry knows exactly where the province’s debt is held, since the bonds B.C. issues are sold and re-sold on open markets.

What the finance ministry does know is where they sold the bonds or notes, and that information is available on the government’s website.

A pie graph on that page shows that as of March 2016, the most recent available, 1.1 per cent had sold in Australia, 1.9 per cent in China, and 3.4 per cent in Europe. Altogether, the government had financed 6.4 per cent of B.C.’s debt overseas. 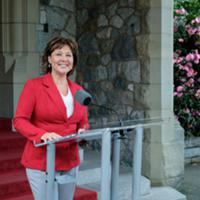 Another 14.6 per cent sold in the United States.

The bulk however, was financed right here in Canada. The chart shows 10.7 per cent selling to the Canada Pension Plan and others like it, 12.5 per cent to private lenders in Canada, and 55.8 per cent on Canadian public bond markets.

True, foreigners could be buying B.C. bonds from the CPP or on the Canadian public market, but then you either believe in free markets or you don’t.

By the way, the B.C. finance ministry argues that diversifying funding sources reduces costs to the province.

Note: A previous version of this story noted that since Clark became premier in 2011, the government has added $10.85 billion to the province’s total debt. That figure is since she ran on “debt-free BC” in 2013. The correct figure since 2011 is $20.14 billion.