Newfoundland and Labrador may seem like the last place the next government of British Columbia will look for economic advice. But they should look — and think — again.

Canada’s most eastern province has been making headlines lately for its terrible economy. There is talk of it possibly going bankrupt, along with predictions of a grim future where all the youth flee, turning my home province into a 405,000 square-kilometre retirement community.

But while every province should learn from Newfoundland’s mistakes — investing billions into hydroelectric megaprojects nobody needs, for example — they should pay attention to its successes, too.

Specifically, Newfoundland’s poverty reduction strategy. Launched in 2005 under then-Progressive Conservative premier Danny Williams, by 2012 the strategy had cut the poverty rate nearly in half to 11 per cent from a high of almost 20 per cent, or 100,000 people.

B.C., meanwhile, remains the last province in Canada without a poverty reduction strategy, and has a child poverty rate of 20 per cent.

The BC Poverty Reduction Coalition wants whoever forms B.C.’s next government to follow in Newfoundland’s lead. Starting April 25, it is hosting two public talks and a webinar with Dan Meades, provincial co-ordinator for the Transition House Association of Newfoundland and Labrador, to discuss the success of Newfoundland’s poverty reduction plan and what wealthier B.C. could learn from its experience.

The Tyee phoned Meades to find out Newfoundland’s secret to cutting stubborn poverty rates, the cost of keeping the status quo, and how the East Coast’s current economic calamity is impacting poverty levels.

The Tyee: Poverty rates were at their highest when Newfoundland introduced its poverty reduction strategy, yet this was at the beginning of a financial boom time. Where was the poverty coming from?

Meades: This was the beginning of what would not be considered a pretty good financial time for Newfoundland and Labrador, 2003 to 2005. Newfoundland, like lots of other provinces, has a pretty stark economic disparity, and so strong economic indicators don’t always find their way down to the lower-middle class, lower class, and people living in poverty. If social policy doesn’t reflect the need for that wealth to be distributed in an equitable way, then it often doesn’t happen.

What did the strategy entail?

Who was involved in developing the strategy?

What money did the plan come with?

If you look at the government’s numbers, in about 2006, they were spending about $31 million on the poverty reduction strategy. And in 2016, they reported spending $250 million.

Those numbers don’t mean what we want them to mean. Every government program that existed way before there was a poverty reduction strategy, and will exist way after the commitment to [reducing] poverty wanes, is now considered to be an investment in the poverty reduction strategy. So how much of that $31 million in 2006 [and] that $251 million in 2016 is new money? We don’t know.

Poverty is a really expensive thing to have in your community, and the lower your percentage of poverty, the more money you [can] spend on things like the health-care system and the justice system and the education system, as well as the social service system through direct payments and program delivery.

Part of the premise here is that [by] investing money, if you get real reduced poverty as the outcome, you save money down the road.

Has there been a cost-benefit analysis done?

There hasn’t in Newfoundland. There’s been good cost analysis done throughout Canada about what poverty costs in an individual province. The [Canadian Centre for Policy Alternatives’ BC Office] and the poverty reduction coalition have done some really good work on saying what it costs to have the amount of poverty you’ve got in B.C.

It almost doesn’t matter how much you spend on poverty reduction. If you can put a dent into British Columbia’s $9-billion price tag [on poverty, as calculated by the CCPA], then you’re going to be saving money for sure. Because no poverty reduction strategy is ever going to come close to that kind of cost, no matter what you need to invest.

Has anyone teased out what poverty reduction happened as a result of the strategy and what was the booming economy?

But what we do see is that in provinces and in countries worldwide where you have a dedicated poverty reduction strategy, you can decrease the poverty rate below 15 per cent.

Newfoundland and Labrador’s economy is really suffering right now. How is that impacting poverty levels?

The poverty reduction strategy was starting to focus on folks that are really a lot tougher to lift above the poverty line. But then changes in government leadership and changes in political climate have really changed the commitment to the poverty reduction strategy in Newfoundland and Labrador. That happened in about 2012, and you can see the moment that we stopped getting updates and there stopped being dedicated staff, suddenly the poverty rate from 2012 to 2014 went from 11 per cent back up to 13.5 per cent.

You see a direct correlation: political and policy commitment to reducing poverty get to a reduction in poverty. The moment you relax that commitment and investment, you stop getting results.

So we are seeing an increase in poverty. We are also seeing a drastic increase in the cost of living because of government taxation. Things like a levy, and adding new, regressive-style taxes to everything from auto insurance to an increasing gas tax, etc. So folks living closer to the poverty line are undoubtedly going to be pushed beneath it over the next couple of years.

Has the current Liberal government in Newfoundland provided any relief for people living close to or below the poverty line?

So that was rolled out in Budget 2016, and the uproar from the community was quick and loud. That was changed before the levy was actually administered — folks living in poverty were exempt from that.

And there’s been some significant investment in services. This year specifically there’s been a lot of investment in transition houses for women fleeing violence. We do see an increase in a need for those services when we see an increase in the poverty rates, so it’s been good to see government recognize when there’s likely been in uptick in that need.

The current B.C. government’s response to calls for a poverty reduction strategy is that we need a strong economy to fund social services, and jobs are the best way to solve poverty. What’s your response?

Any government that is committed to doing two things, number one making decisions based on evidence, and number two reducing poverty, has no choice but to implement a poverty reduction strategy.

Do you think if Newfoundland and Labrador hadn’t had a strong economy in the 2000s there would have been a poverty reduction strategy? 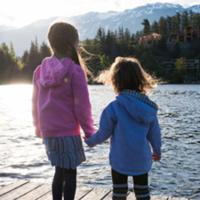 One in Five Kids in BC Is Poor, Report Finds

Probably not. I do think that politicians and governments need to have space to be able to make those tough policy decisions, and they need to have income to make it with as well. But if you’re not going... to reduce poverty when you have a strong economy, when are you going to do it?

This is the moment to take a second and think about what you want the future of [British Columbia] to be, whether you think it’s okay to have 20 per cent of children living in poverty. We know what the social and economic outcomes of those numbers are: you’re going to spend a ton more money on justice, education and health care, and the children that grow up in poverty are far more likely to have children that also grow up living in poverty. The intergenerational cycle of poverty is tied to violence, addictions and mental illness. It’s also tied to shorter life expectancies.

Why are you coming to B.C.?

When we start to get things right and can see significant decreases in poverty and can see the positive things that happen in our community, I think it’s really important that we tell that story.

I also think it’s really important that we warn people what we see when that commitment wanes. We’re concerned about poverty rates in Newfoundland and Labrador going up again. We want provinces all across the country to know when you have the opportunity to invest and decrease these poverty rates, not only do you have the political as well as the moral imperative to do so, you have the economic imperative and you shouldn’t miss your opportunity.