Cherry blossoms are working their magic on Belcarra Drive in Burnaby as a mid-April shower tiptoes toward the neighbourhood, which sits right next to one of the most controversial energy projects in Canada.

It’s here, in the riding of Burnaby-Lougheed, where Kinder Morgan’s expanded Trans Mountain pipeline will discharge oil to be loaded into tankers. And Burnaby-Lougheed is one of four ridings where the two main parties’ positions on the project — BC Liberals support it, the NDP opposes — could decide the election outcome,

It’s also where, 10 years ago, a pipeline was ripped open by a contractor. Oil soaked the surrounding homes, yards and cherry trees with more than 230,000 litres of crude; 70,000 spilled into Burrard Inlet.

Resident Mary Hatch was one of those whose homes were hit that day in 2007 and remembers oil running right down the street.

“It didn’t just go straight up, it was gushing out and oil travels on air currents, so it went quite a distance,” Hatch said, speaking to The Tyee before an all-candidates event for Burnaby North and Burnaby-Lougheed ridings.

U.S.-based Kinder Morgan wants to twin the pipeline, almost tripling its capacity to 890,000 barrels a day and bringing seven times as many tankers through Burrard Inlet.

The federal government approved the expansion plans in November and the provincial Liberals approved it in January.

But Hatch worries what the expansion will mean for the safety of her neighbourhood and other communities around Burrard Inlet.

Many of her neighbours feel the same way, she said.

“They really don’t want anymore infrastructure, they really are opposed to it,” she said. “I think that people have more of an awareness of pipelines now. I think there’s still a long way to go, but I think a lot of people are far more aware.”

It’s not just the environmental issues. Opponents argue the pipeline expansion will not bring jobs and the potential costs outweigh the few benefits.

If Hatch’s views are widely shared around Burrard Inlet, it could spell trouble for the BC Liberals. Three of the ridings along Burrard Inlet — Burnaby-Lougheed, Burnaby North and Port Moody-Coquitlam — were won by fewer than 1,000 votes in the last election and North Vancouver-Lonsdale by slightly more. All but one were Liberal victories.

During the 2013 election many cited then-NDP leader Adrian Dix’s mid-campaign decision to oppose the pipeline expansion as a major factor in the party’s loss.

This time the NDP has come out firmly against the project, arguing it brings an “unacceptable risk” to the province.

NDP candidates in Burnaby, North Vancouver and the Tri-Cities are counting on the party’s opposition to the pipeline expansion to help them claw their way to victory. It may be working if Hatch’s neighbourhood is an example.

The yards don’t sport BC Liberal signs. The owner of the only house with a sign for Liberal Steve Darling didn’t even live there when the spill happened, Hatch notes.

Most signs are for NDP candidate Katrina Chen, with one Green Party sign. Another weather-beaten sign opposing the pipeline expansion sits — seemingly permanently — on the lawn of one home.

But the 2007 spill didn’t just affect Burnaby. Authorities closed beaches in North Vancouver and across the water in the village of Belcarra after dead sea life and oil started washing up.

Bowinn Ma, NDP candidate for North Vancouver-Lonsdale, said she thinks the public sentiment has shifted and most people oppose the pipeline.

Ma said when she’s knocking on doors the pipeline comes up frequently, placing it the top five concerns for the riding.

“People are ready to make climate change and the environment a far larger, far more important priority in terms of the kinds of things the government should be taking care of,” she said.

During the 2013 election BC Liberal Naomi Yamamoto won the seat by almost 1,200 votes and Ma said the NDP’s opposition to the project could give her an edge on voting day.

But back at the Burnaby debate venue, Green Party candidate for Burnaby-Lougheed and punk-rock frontman Joe Keithley warns people not to buy the New Democrats’ position on the pipeline.

“I do not believe that the NDP are sincere about stopping it,” Keithley said. “I think it’s a matter of convenience that [leader John Horgan] is saying he’ll stop the pipeline.”

Keithley predicts an NDP government, after “arm twisting” from Alberta Premier Rachel Notley and Prime Minister Justin Trudeau, will claim it tried to stop the project, but couldn’t.

He said a strong Green contingent in the legislature could provide pressure to hold the NDP to its pipeline promises.

Behind Keithley a collection of greying locals unfold chairs in preparation for the all-candidates meeting.

The event was hosted by two environmental groups concerned about the Kinder Morgan expansion — Burnaby Residents Opposed to the Expansion of Kinder Morgan and the Force of Nature Alliance.

With fewer than 10 people in the school gym there’s already talk of the pipeline and questions whether the BC Liberal incumbent for Burnaby North, Richard T. Lee will even participate. Lee has won the last three elections by fewer than 1,000 votes.

With 30 minutes to go before the event, a man arrives with photocopied campaign literature from Lee and plops two small piles on a folding table. He tells organizers Lee isn’t coming.

The Liberals’ Darling, a former TV anchor, isn’t coming either. He has a “prior engagement.”

On the school stage, name cards are taped on the table where the two candidates would have sat. Under their names “with regrets” is written. 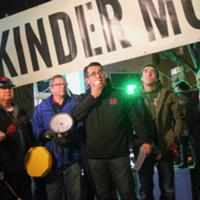 Will Kinder Morgan Surprise BC Liberals or NDP in May Election?

As the audience is called to attention to begin the event an audience member starts booing and shouting “shame” to protest the missing Liberal candidates. He’s asked to behave.

At the back of the room Lee’s campaign pamphlets sit on the table. One paragraph boasts about the environmental conditions Victoria wants met for the pipeline.

Lee’s flyer points out the pipeline doesn’t even go through his riding, but he’s been advocating in favour the provincial government’s “five conditions” for approving the project.

That seems to fall short of what Hatch is looking for in an MLA.

“I hope that we have a candidate that will speak up for Burnaby and oppose the pipeline,” she said, standing near the table with Lee’s photocopied campaign material.

The pamphlets do not respond.