The Canadian government is both protecting the environment and growing the economy by approving two pipeline proposals while rejecting a third pipeline proposal and committing to a moratorium on oil tanker traffic on British Columbia’s north coast, Prime Minister Justin Trudeau said today.

“Ultimately this is about leaving a better country for our kids than the one we inherited from our parents,” Trudeau told a news conference in Ottawa. “We took this decision because we believe it is in the best interest of Canada and Canadians.”

Trudeau said the government has given conditional approval to Kinder Morgan to build the Trans Mountain pipeline from Edmonton, Alberta to Burnaby, B.C. and to Enbridge for its Line 3 Replacement Project between Hardisty, Alberta and Superior, Wisconsin.

At the same time the government rejected Enbridge’s Northern Gateway proposal that would have taken diluted bitumen from Bruderheim, Alberta to Kitimat, B.C. “The Great Bear Rainforest is no place for a pipeline and the Douglas Channel is no place for oil tanker traffic,” he said.

Speaking about the Trans Mountain approval, which will triple the capacity of the existing pipeline and add about six oil tankers a week leaving Vancouver, Trudeau said, “If I thought this project was unsafe for the B.C. coast, I would reject it.”

The decisions were made based on debate, science and evidence, he said. “We will not be swayed by political arguments, be they local, regional or national.”

Alberta’s commitment to cap greenhouse gas emissions from the oil sands at 100 megatonnes per year is key to Canada meeting its GHG goals, Trudeau said. “These new pipelines fit within that target.”

“We know there are people who feel very strongly on either side of this decision,” Trudeau said, noting that whatever choice the government made would anger some people. “People are more than free to express their opinions, to express their disappointment with government.”

Several times during the news conference Trudeau mentioned his connection to B.C. through his grandparents and the time he has spent in the province.

Ian Anderson, the president of Kinder Morgan Canada, welcomed the decision. “This is a defining moment for our Project and Canada’s energy industry,” he was quoted saying in a company press release. “This decision follows many years of engagement and the presentation of the very best scientific, technical and economic information. We are excited to move forward and get this Project built, for the benefit of our customers, communities and all Canadians.”

The company, whose board of directors has not yet made a final investment decision, hopes to have all necessary permits in place so it can begin construction in September 2017, with a plan for the project to be completed by late 2019, the release said. The National Energy Board approval included 157 conditions and the federal government has committed to implementing the southern resident orca recovery plan.

B.C. Premier Christy Clark was not immediately available to comment on the federal government’s decision, but her environment minister Mary Polak gave an emailed statement saying the province stands by its five conditions for any new or expanded heavy-oil pipeline.

“We will work to ensure each of our conditions are met,” said Polak. “Because we have taken that clear and principled approach to stand up for our province, we have seen the proponent and the federal government take actions, including Ottawa’s recent Ocean Protection Plan to address world-leading marine spill prevention and response.”

The province’s other conditions include successful completion of the environmental review process, world-leading land based spill response, meeting legal requirements regarding Aboriginal and treaty rights, and that B.C. receive “a fair share of the fiscal and economic benefits of a proposed heavy oil project that reflects the level, degree and nature of the risk borne by the province, the environment and taxpayers.”

Polak said B.C.’s Environmental Assessment Office has been reviewing the Trans Mountain project for seven months and she understands the review will be completed soon.

Vancouver Mayor Gregor Robertson said in a prepared statement that he was “profoundly disappointed” with the decision. “Approving Kinder Morgan’s heavy oil pipeline expansion is a big step backwards for Canada’s environment and economy,” he said. “This project was approved under a flawed and biased Harper-era regulatory process that shut out local voices and ignored climate change and First Nations concerns.”

NDP leader John Horgan criticized Clark for failing to require the project to undergo a provincial review separate from the federal process. “British Columbians gave Christy Clark a chance to protect our coast and she chose to put wealthy donors before the well-being of local communities, First Nations and our coastal environment,” he said. “From the get-go Christy Clark was focussed on undermining British Columbia’s ability to defend itself against this risky project that puts our environment and economy at risk.”

Andrew Weaver, leader of the BC Green Party, said the federal decision betrayed the trust of British Columbians. “As a scientist, I can say unequivocally that we remain completely and utterly unprepared for a major oil spill,” he said. “Instating a ban for part of the coast while increasing heavy oil tanker traffic by 580 [percent] in another is completely outrageous. It ignores basic ocean science. We need to protect the entire coast.”

Shortly after Trudeau’s announcement, several First Nations and environmental groups released statements, mostly in opposition to the project. Various groups promised peaceful protests, the first of which was called for Tuesday night outside the CBC building in downtown Vancouver.

Charlene Aleck, spokesperson for Tsleil-Waututh Nation Sacred Trust Initiative, said the federal government’s decision was based on flawed information. “I have to say that I am not totally surprised by the permit decision today but I am disappointed,” she said. “There is a terrible history of the mistreatment of First Nations people in Canada. It saddens me because we hoped things might be different with Trudeau but today’s decision is a big step backwards.”

Aleck said there was no meaningful consultation with the Tsleil-Waututh Nation, which considers Burrard Inlet the heart of its territory. She predicted permits for the project will be thrown out in court and said the First Nation will not allow the project to be built. “This is just the beginning of another phase of this conversation.”

Grand Chief of the Assembly of Manitoba Chiefs, Derek Nepinak, said the decision on Line 3 means “tar sands oil” would be transported to Manitoba and that First Nations would “resist it 100 per cent of the way.” He also said he sympathized with the Standing Rock water protector protesters in North Dakota.

The Coastal Nations said the government was right to quash the Northern Gateway proposal and formalize the oil tanker moratorium. “We’re jubilant to see this final nail in the coffin to Enbridge Northern Gateway,” said Patrick Kelly, the CFN board chair. “Coastal First Nations have been calling for this decision since 2011. It’s a huge victory for us and for all coastal communities that depend on our coastal marine resources.”

The Treaty Alliance Against Tar Sands Expansion has been signed by more than 100 Nations and Tribes, including 56 in B.C., said Grand Chief Stewart Philip, president of the Union of B.C. Indian Chiefs. “Ultimately, as the Trudeau government is well aware, these projects will not succeed,” he said. “The opposition is too great, and we will remain united, strong and determined.” 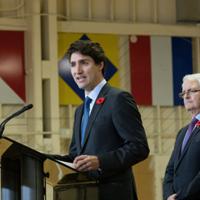 The Dogwood Initiative called the Kinder Morgan decision a “cynical betrayal” that would have heavy political consequences for Trudeau. “As acknowledged by Justice Minister Jody Wilson-Raybould during her election campaign -- and many other legal observers -- federal approval today does not mean the Kinder Morgan project will be built,” it said. “First Nations will challenge the approval in court, while British Columbia retains jurisdiction over dozens of permits required for construction.”

The group said it would begin a citizens’ initiative to force a provincial referendum on whether bitumen should be transported to the west coast and noted a recent poll showed British Columbians oppose oil tanker traffic by a factor of two to one.

The Sierra Club BC welcomed the rejection of Northern Gateway and the tanker ban on the north coast, but condemned the two approved pipelines.

“B.C. will not be a sacrifice zone for the Prime Minister’s incoherent climate and energy policy and Alberta’s deluded demands for tidewater access,” said campaigns director Caitlyn Vernon. “Prime Minister Trudeau has picked a fight with British Columbians by approving Kinder Morgan — and it starts now ... The Kinder Morgan pipeline will not be built. Not on our watch.”

With files from Christopher Cheung and Mychaylo Prystupa.