The electoral reform organization at the centre of a controversy in Ottawa over its role in one of Monday’s federal byelections plans to campaign for electoral reform in the B.C. provincial election and support parties that share its views.

Fair Vote Canada is planning its first sortie into a provincial election and already has 11 campaign teams in place. The organization plans to register as a third party sponsor of campaign advertising. On Sunday, it plans a webinar to discuss its plans.

Executive director Kelly Carmichael said supporters of electoral reform are looking for “openings” across Canada to bring the issue to the forefront and B.C. is a good place to try.

“We will be visible at all of the all-candidates’ debates,” Carmichael said. “We’ll be handing out flyers, trying to get our supporters up to mics to talk about proportional representation and see if we can try to make this an issue.”

Fair Vote Canada faced controversy this week after it was reported the organization received help from the NDP as it mounted a campaign against the Liberals in Monday’s Ottawa-Vanier byelection. The New Democrats supplied advice, research and maps. The Liberals retained the riding.

Carmichael said the Liberals broke their promise to bring in electoral reform and need to know those who supported them won’t put up with the betrayal.

“We favour candidates who support proportional representation,” Carmichael said. “In the 2015 election we supported Liberal candidates... they more or less turned their backs on us.”

Carmichael stressed Fair Vote Canada had endorsed both the Greens and the New Democrats in five byelections across Canada held Monday. Both parties support electoral reform.

The organization plans to support B.C. parties that back proportional representation. Both the BC Green Party and the NDP have plans for electoral reform in their platforms. 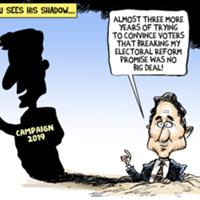 Meanwhile Fair Voting BC, a provincial organization advocating electoral reform, also plans to be active in the provincial campaign and share information on the issue with supporters.

President Antony Hodgson said he has already spoken to the NDP about its policy.

“They’ve been prepared to take a position on electoral reform,” Hodgson said. “They haven’t really yet made it a huge election issue, but they have been making commitments to pursuing electoral reform if they were to form government.”

Hodgson said he’s received “nothing positive” from the BC Liberals on the issue since before the 2013 election.

Hodgson said the voting system in the province is exclusionary and electoral reform should be seen as a civil rights issue. The voices of those who didn’t vote for the winning party are silenced under the current system, he said.

The province has held referendums on replacing the current system with the single-transferable vote electoral system in 2005 and 2009. About 58 per cent of voters supported the change in 2005, below the 60 per cent threshold. In 2009, 62 per cent of voters rejected the proposed replacement system.

Carmichael said the strong support in the 2005 referendum shows B.C. is a good place for an electoral reform pitch.