Precarious work is on the rise at post-secondary institutions across British Columbia and the country, with negative impacts felt in workers’ security and wages. But it’s also impacting the quality of education students receive.

That was the message at a CUPE town hall Thursday night at the University of British Columbia’s Vancouver campus, where members from UBC locals discussed the implications of part time, casual and contract employment in higher education. Speakers included former and current union reps from UBC, Simon Fraser University, the University of Victoria and North Island College.

But in the lead up to B.C.’s provincial election, CUPE BC members say there are many small changes the next government could make to turn things around for casual and part-time post-secondary workers.

“The post-secondary sector is one of (CUPE National’s) sectors that has the highest number of precarious workers,” said Chandra Pasma, a researcher for CUPE National.

“There’s not a week that goes by that I don’t have somebody in tears, either on the phone or in my office, because of the lack of security,” said Dawson, a problem made worse by the rising cost of housing in Victoria.

Nor can sessional lecturers easily apply for employment insurance to make up for lost work when they’re paid by the course instead of hourly. 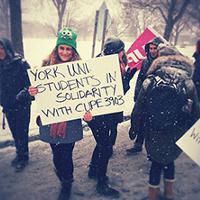 But there are implications for students, too. When courses are cut, students aren’t always able to access prerequisite courses, thereby extending the length of their studies and the tuition they pay.

“At our university, there’s been cuts to programs and there’s been huge increases to class sizes,” Dawson said of UVic. “Those very clearly don’t equal good learning. We should be bringing the parents in on a coalition to say ‘no.’”

Speakers pointed to B.C. government mandates requiring that institutions make cuts to pay for any gains workers achieve through bargaining, as well as a decrease in provincial and federal funding to post-secondary education, as reasons behind the growth in precarious work.

“Institutions used to be 80 per cent or more funded by government,” said Michelle Waite of CUPE Local 3479, which represents North Island College support staff. Now it’s around 50 per cent, she said, with the rest made up from a combination of tuition fees and corporate partnerships.

Presenters identified several steps the next B.C. government could take, each one providing a step towards instructor job security: remove government mandates that dictate bargaining outcomes; increase minimum wage to $15 an hour from the current $10.85; increase funding to post-secondary; and fix the housing crisis.

“That would take a huge amount of pressure off,” said David Chokroun, Simon Fraser University CUPE Local 3338, in reference to housing costs. “I would love to work 60 per cent full time instead of 100 per cent full time, but who can afford it living in Vancouver?”