After publicly splitting three years ago from the party he once led, former premier Mike Harcourt says that he has returned to supporting the NDP under John Horgan’s leadership.

“I think Horgan’s potentially a good to great premier,” Harcourt said in a phone interview. “He’s got a tremendous amount of experience.”

Harcourt also said Horgan has a good team around him and is developing a platform that provides a vision for the future that is distinct from the one put forward by Premier Christy Clark and the BC Liberals.

“The economic model the Liberals are working from is out of date,” he said. The NDP is offering a 21st century approach to economic development, instead of the Liberal approach that’s stuck in the 1950s, he said.

“It’s there on a platter to make it really clear the current government is wedded to reincarnating W.A.C. Bennett.”

The endorsement is a turnaround for Harcourt, who in April 2014 announced he was leaving the party that he had led from 1991 to 1996.

His reported grievances included the NDP’s failure to bridge urban and rural areas of the province, the party’s 2009 opposition to the government’s carbon tax, and the messy caucus split that in 2010 pushed Carole James out of the leadership.

Then there was the decision to oppose Kinder Morgan’s Trans Mountain Pipeline proposal, announced by then leader Adrian Dix with just a couple weeks to go before the 2013 Election Day.

“First of all, why did Adrian bring it up? There was a process under way that should have concluded,” Harcourt said. It wasn’t so much that opposition to the pipeline was the wrong position, but that it showed poor political judgement and needlessly suppressed support for the party from blue collar voters, he said.

When he added it all together, Harcourt concluded it was time to take a break from the party. “I put them on probation for a year,” he said.

Now, with Horgan leading the party and a couple months to go until the next election, Harcourt is letting it be known he’s back in the NDP fold.

Horgan was a staff member in the NDP government when Harcourt was premier. Harcourt said Horgan navigated some thorny files in those days, including the Columbia River Treaty with the United States, the Commission on Resources and the Environment process that aimed to strike a balance on land use and the treaty process with the province’s Indigenous people. 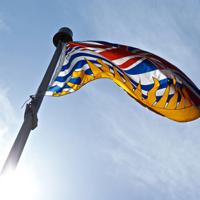 “I threw him into some deep ends of pools as a staffer,” Harcourt said. “He knows the province. He knows what I call the ‘beyond Hope’ natural resource-based communities and that there’s a future there too.”

The NDP’s platform is shaping up, Harcourt said, including promises to move toward providing child care for $10 a day, raise the minimum wage to $15 an hour and send the Site C dam to the BC Utilities Commission for review. He said it was also good to see the party’s skepticism about the proposed bridge to replace the Massey Tunnel.

While Clark will be promoting job creation and the relative strength of B.C.’s economy, Harcourt challenged the government’s record. “I think the B.C. economy could do a lot better, particularly in the high tech area.”

The government can help the industry attract and retain talent by making sure housing is affordable, child care is available and transit is supported, he said, adding it’s important to make sure people can get education and training without going deep into debt.

There are also opportunities to create jobs restoring forests, providing new wood products and producing gas products besides liquefied natural gas, Harcourt said. “Let’s accelerate what we’re doing well now and expand on it rather than the pipe dream of LNG.”

Harcourt said that in his view the NDP was running behind the BC Liberals a couple of months ago, but the party’s prospects have since improved. “There’s been a slight turn,” he said. “I think it’s an open race. The NDP are becoming more competitive.”

“It’s going to boil down to 20 ridings, the debates and the craziness of the last two weeks of any campaign.”