If the federal government continues to avoid its environmental responsibilities, Canada’s largest national park could soon be listed as a “world heritage site in danger” due to threats posed by energy development and nearby hydro dams, says the United Nations.

Moreover, the government should immediately conduct an “environmental and social impact assessment of the Site C project,” which threatens to alter the flow of water through the Peace Athabasca Delta in the heart of the 4.5-million-hectare Wood Buffalo National Park, located north of the tar sands.

“The time is now to finally give this project the scrutiny it deserves and to establish a basis for informed and balanced decision-making still currently lacking,” says an 85-page UNESCO World Heritage Centre report released last week.

In 1983 UNESCO established Wood Buffalo National Park as a World Heritage Site. It is the boreal home to the largest population of wild bison in the world and the world’s largest inland river delta, the Peace Athabasca. Whooping cranes nest in the park, too.

But a series of dams built prior to 1983 on the Peace River, including the Bennett and Peace Canyon dams, have greatly altered water and sediment flows into the delta and dried it up.

“Although the Site C project is still more than 1,000 kilometres upstream of the Peace Athabasca Delta, many expect the project to contribute to further flow impedance down the Peace River on top of impacts from the existing Bennett and Peace Canyon dams,” said the highly critical report.

A 2014 federal environmental assessment of the Site C project didn’t examine impacts on the delta because the project’s proponent, BC Hydro, said there would be “no detectable” effects. The federal panel restated BC Hydro’s position “without providing a conceivable technical rationale for this conclusion,” said the UNESCO report.

The UNESCO mission found this “simplistic approach” inadequate: “From a technical perspective, it is clear that there are important effects which should be understood to inform decision-making, including as regards to mitigation options.”

But the joint federal and provincial environmental assessment panel also couldn’t find any real need for the project.

To this day, critics describe the dam as a political vanity project for B.C. Premier Christy Clark, given the failure of her grandiose liquefied natural gas strategy. Clark promised that industry would flood the province with jobs and riches, but a global methane glut and low prices has killed or stalled one proposed project after another.

In addition to the recommendation on Site C, the report listed another 16 recommendations that are necessary for the Canadian government to fulfill if it wants to avoid placing the region on the growing UNESCO list of “World Heritage Sites in Danger.”

The report also recommended that government “conduct a systematic risk assessment of the tailings ponds of the Alberta Oil Sands region with a focus on risks to the Peace-Athabasca Delta” and to study options for creating “a buffer zone between the Park and oil sands projects.”

The mission has given Canada one opportunity to follow-up the recommendations. There are no second chances.

Environment Minister Catherine McKenna said in a statement that the government would respond to the report but that “a true response to this report will only be possible through collaboration at all levels, between federal, provincial, and territorial governments, engagement with Indigenous partners and consultations with industry and other stakeholders.”

The Mikisew Cree First Nation, alarmed by the growing number of dam and tar sands projects outside Wood Buffalo National Park, petitioned the World Heritage Committee to investigate in 2014.

The Government of Canada subsequently invited a “Reactive Monitoring Mission” to assess potential threats and speak with First Nations and scientists last fall.

Melody Lepine, Mikisew Cree First Nation lead for the UNESCO petition effort, said the report confirms what elders have been saying for years. “Canada may have ignored the Peace-Athabasca Delta and the Mikisew Cree in the past, but now the world will be watching. It’s time for Canada to start working with us to protect the Delta.”

Galen Armstrong, Peace Valley campaigner for the Sierra Club of BC, added that “This damning report demonstrates the Trudeau government should never have allowed any approvals for the Site C mega-dam in the first place.”

The UNESCO report portrayed Canada’s as an environmental laggard in the region.

“It is undisputable that industrial development along the Peace and Athabasca River corridors has massively and steadily increased over several decades,” the report noted. “Rather than being matched by adequate governance and management responses, the recent years have unfortunately coincided with a well-documented weakening of Canada’s environmental regulatory framework, and a weakening of Parks Canada Agency in terms of conservation focus and scientific capacity.”

In 1996 the Northern River Basins Study recommended that the “economic considerations of power production… should not take precedence over the environmental stability and natural ecosystem of the Peace River, Peace-Athabasca Delta, Slave River and Delta and the Mackenzie River system.”

But the Governments of Canada, British Columbia, and Alberta, which also wants to put a dam on the river, have repeatedly ignored such an approach.

The mission noted in its report that a petition signed by more than 370 academic scientists and endorsed by the Royal Society of Canada “attested to several major concerns during the permitting process for the Site C project. A Public Statement by Concerned Scholars on the Site C project notes that ‘our assessment is that this process did not accord with the commitments of both the provincial and federal governments to reconciliation with and legal obligations to First Nations, protection of the environment, and evidence-based decision-making with scientific integrity. 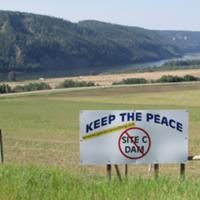 Site C and the proposed Amisk hydropower project, a fourth dam proposed for the Peace River, “have so far not been assessed in terms of their impacts on the already altered Peace Athabasca Delta even though the latter is both a fundamental contributor to the justification of World Heritage and Ramsar status and home to several Aboriginal Peoples,” noted the UNESCO report. (The Ramsar Covention is an international agreement on the protection of wetlands.)

David Schindler, one of the world’s foremost water ecologists who has conducted numerous studies in the region, said the UNESCO panel report is an opportune warning.

It serves as “a reminder to Canada that it requires more than lip service to include First Nations and protect the ecosystems that provide us with both the ecological services that clean our air and water, and areas that can be enjoyed as unique parts of our country’s natural heritage, as well as providing the subsistence and spiritual needs of Indigenous People.”