An NDP government would gradually raise the carbon tax in British Columbia and use the new revenue to provide rebates to citizens and fund green projects, leader John Horgan said today.

“Our plan is a clear response to Christy Clark’s failure on climate action,” Horgan said in a news conference in Vancouver Thursday. “The only measure of a successful plan is a reduction of our overall emissions.”

The federal government has said that by 2022 provinces must put a price of $50 per tonne on carbon emissions, or it will implement such a tax itself.

The increases would be gradual and predictable, Horgan said. “We want a made in B.C. solution.”

The new revenue would be used to double the number of families receiving carbon tax rebate cheques to 80 percent, Horgan said. It would also be used to create jobs and invest in building a clean economy, he said.

Details of the plan are included in a 10-page document the party released today.

Horgan said that carbon pollution has been rising in B.C., that current policies won’t change that and that the government’s approach benefits wealthy people and corporations.

According to last February’s budget, the carbon tax was projected to raise $1.285 billion this year. Businesses and individuals were expected to get nearly twice as much back through tax cuts and other measures.

An NDP government would adopt the recommendations made last year by the Climate Leadership Team that Clark appointed but largely ignored, Horgan said. “We want to embrace it and then build on it.”

The NDP released statements from several supporters of the party’s plan, including Tzeporah Berman, a member of the Climate Leadership Team. During the 2009 election Berman created a stir when she and other environmentalists condemned the NDP’s then opposition to the province’s carbon tax.

“Instead of a fake climate plan that allows emissions to rise, John Horgan’s climate plan shows real action to defend our environment while making sure progress is affordable for all British Columbians,” Berman was quoted as saying in today’s release. 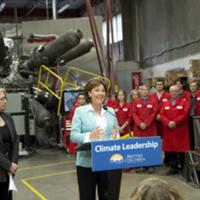 BC Shouldn’t Idle on Carbon Tax While Canada Catches Up, Says Opposition

The BC Liberals released what they called a “leaked [NDP] secret strategy document” ahead of Horgan’s announcement and criticized the plan as a cash grab.

“We believe British Columbians are taxed more than enough already,” it quoted environment minister Mary Polak saying. “That’s why we return every penny of the current carbon tax by cutting taxes for the middle class and small business.”

The NDP would instead raise the carbon tax “to spend on reckless schemes,” she said.

When asked if he was concerned about the Liberals having a copy of his plan before he announced it, Horgan said he welcomed their help getting his message out.