In an email to potential donors, the British Columbia Green Party is connecting the forestry stalemate in Fort Nelson to corporate donations made to the BC Liberal Party and the BC NDP.

“With your help, we can elect a government who puts jobs before companies like Canfor,” said the pitch the Green Party sent on Nov. 26 under the name of their forestry spokesperson, Kamloops-North Thomson candidate Dan Hines.

Representatives of Fort Nelson have recently criticized the provincial government for allowing Canfor to continue to hold two large licenses to harvest trees from public land in the area, even though the company closed its mills there in 2008. Instead of logging and creating jobs, the company has “hoarded” trees, they said.

“To create local jobs, Fort Nelson’s mayor wants Canfor either to use its licence or give it to someone who will,” Hines said in the email. “He even wrote to the provincial government, asking the forestry minister to use his authority to cancel the licence so local jobs could be created.”

According to Elections BC’s donation database, between 2005 and 2015, Canfor Corp and Canfor Pulp Limited Partnership combined gave a total of $96,225 to the BC Liberals and $56,245 to the BC NDP. A search of the database also shows the parent company, Canadian Forest Products Ltd., has since 2005 given the BC Liberals $658,406 and the BC NDP $73,050, points out Integrity BC executive director Dermod Travis.

“Do you think the BC Liberal government is eager to tell their $50,000 donor to give up a forestry licence?” Hines asked. “Do you think the NDP are going to push for it, when they also got $50,000 from Canfor?”

People will see through the BC Greens’ fundraising pitch, said BC NDP president Craig Keating.

The BC NDP has consistently held the government to account when mills have closed and the province has lost forestry jobs, he said.

“I think people in B.C. know exactly where the BC NDP stand,” Keating said. “We’ve always been the party of keeping logs in the province and getting the best value for them in the province.” Getting the “best value” from the resource means employing as many British Columbians as possible, he said.

“I think the notion we’re throwing Fort Nelson under the bus is just nonsense,” he said. “Our critic is standing up for Fort Nelson.”

The Tyee has reported that Harry Bains, the NDP forestry critic, said the community was “absolutely justified in being outraged” about the failure to use the resource to support local jobs and that the government had failed to show leadership on the file.

Bains argued for bringing communities and the industry together to talk. “We need to sit down with the industry and say ‘you have obligations with the trees you harvest to create jobs for the local population.’”

The Tyee also reported that a spokesperson for the Forests, Lands and Natural Resource Operations ministry said Minister Steve Thomson had asked staff to review Canfor’s compliance with its licenses and that the government has been working closely with Fort Nelson on a forestry rejuvenation proposal.

It’s unclear what the Greens would like to see done differently. In a phone interview, asked about the NDP’s call for talks involving the industry and communities, Hines said, “I think at this point that’s the best approach, to have that discussion... We need to be able to sit down with everybody.”

On forest policy in general, the Green Party is in “a listening phase” and is still developing positions it will roll out in more detail in January or February, he said. “As Greens we’re carefully considering what it will take to reform the tenure system as it exists now,” he said. “Obviously there’s something wrong with the tenure system as it is. It needs reform. It needs reconsideration.” 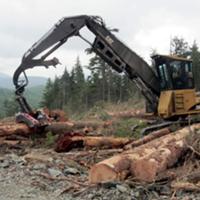 Hines’ email also said “more and more people” are asking who controls politics in B.C., “Especially after NDP Leader John Horgan hosted a fundraising dinner for his big corporate donors from the resource sector. It was the same type of fundraising dinner he criticizes Christy Clark for hosting.”

News outlets reported last week that Horgan hosted a resource industry reception and dinner at a hotel in downtown Vancouver on Nov. 24. Tickets were $2,500 for individuals or $4,000 per couple for the 90-minute reception. An organization could pay $10,000 to have up to five guests attend the reception, one of whom could stay for dinner and cocktails with Horgan and his team.

Horgan has said that an NDP government would ban corporate and union donations from provincial politics, but in order to compete with the BC Liberals the party will continue to accept those contributions until such a ban is in place.

Premier Christy Clark, leader of the BC Liberal Party, has defended allowing large contributions to political parties, saying it’s a better option than funding politics with money from taxpayers.

Green Party leader Andrew Weaver announced in September that his party would no longer accept corporate or union donations, though he acknowledged the party received few such contributions anyway.

Noting that Weaver has in the past voted for Christy Clark’s budgets, the NDP’s Keating said that if the NDP were to heed the calls to forego corporate and union donations while the Liberals continue to accept them, it would only serve to perpetuate Clark’s rule.