The B.C. government will implement what Labour Minister Shirley Bond called "a very aggressive 90-day strategy" to improve sawmill safety and avoid any repeat of the fatal 2012 explosions at Burns Lake and Prince George -- both believed to have been caused by unsafe sawmill practices and failures to properly control potentially explosive sawmill dust. 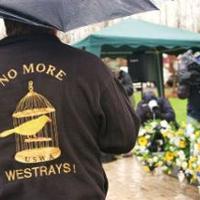 Bond told the Globe and Mail Monday the province will double WorkSafeBC's inspection team for mills to 20 staff. She said the plan includes a multi-point strategy to limit combustible dust and make sure mills comply with safety regulations.

Steve Hunt of the United Steelworkers said he hopes the plan will improve WorkSafeBC's performance at preventing accidents, injuries and deaths. His union, Hunt said, supports the call for a full public inquiry.

In a YouTube statement, NDP leader Adrian Dix also renewed his party's support for an inquiry. Survivors and family members from the two fatal fires have continually demanded a public inquiry to address transparency and accountability concerns.

"The families impacted at Babine Forest Products and Lakeland Mills need accountability for what has happened to our loved ones," Rhonda Roche, the widow of Glenn Roche, told Canadian Press in March. "Maybe then we'll be able to heal and get the closure that I think we all deserve."

Maureen Luggi, widow of one of the workers who died at the Babine Forest Products fire and second cousin of the other worker killed, told the Free Press: "All of this evidence that the Crown looked at, I want to know what's in it."

B.C.'s chief coroner Lisa Lapointe responded to the families' concerns in a statement suggesting her proposed inquest into the Burns Lake explosion would answer important questions.

"I want to assure the families of the two workers who died, the many others who were seriously injured and everyone who was impacted by the events of Jan. 20, 2012, that the Coroner's Inquest ordered into the deaths of Mr. Luggi and Mr. Charlie will thoroughly review all aspects of this tragedy," she wrote.

"In particular, the inquest will review policies, practices and responsibilities related to the mill operation and worker safety, and will allow an opportunity for a full and frank review of the mill's operation and of all of the events leading to the tragedy."

An inquest strictly limited to the coroner's mandate, Hunt said, would fail to examine the larger structural issues that led to the deaths at the Babine Forest Products mill. Before the announcement, he said the official response to the deaths and injuries in the two mill fires had been "a stupendous miss."

"You need to look at WorkSafeBC, the RCMP and Crown counsel," he said. "Regulators have to do their job, and so does law enforcement."

Hunt's union launched a campaign called "Stop the Killing" to bring attention to Canada's lax enforcement of the Criminal Code provisions that outlaw fatally careless management. The United Steelworkers are touring the country demanding laws be strengthened and properly enforced to reduce the death toll at Canadian job sites -- a figure nearing a thousand workers every year.

A WorkSafeBC investigative report into the Burns Lake deaths called for charges to be laid under the Workers Compensation Act relating to safety failures at the mill. However, Crown counsel determined that no charges should be laid because of possible failures by WorkSafeBC investigators to respect Charter rights during the investigation.

In February, WorkSafeBC released a similar report, suggesting Workers Compensation Act charges should be laid in the Lakeland deaths. A decision as to whether charges will be laid is expected in late April.

The federal government responded to union pressure in 2004 with a law criminalizing management recklessness and negligence. The Westray Act, named for a coal mine disaster that killed 26 men, has yet to spark even one successful criminal charge in B.C.

Steven Bittle, a criminologist at the University of Ottawa who has written extensively about the Westray law, said he would like to see this changed.

"Despite official rhetoric claiming support for Westray, there has been little action thus far to follow through with these claims, despite [the fact] that thousands of workers have been killed since the law's enactment."

The charges recommended by WorkSafeBC inspectors at both mills were charges under the Workers Compensation Act, essentially administrative charges, not criminal charges under the Westray Act. Only about a dozen charges have been laid under Westray's authority.

Hunt points out B.C. has a long way to go when it comes to workplace safety. A recently released WorkSafeBC investigation of B.C. sawmills revealed that even two years after the lethal mill fires, many mills were still operating with dangerous levels of fine dust in the air, posing the risk of explosions and fires in the inadequately protected work sites.

The report, the work of a team of 10 inspectors who visited all working mills in the province (144 sites, 249 inspections) found only 83 of the sites were in compliance with dust control regulations. The level of negligence at 11 of the mills was extreme enough that WorkSafeBC issued stop work orders, and at two mills, second stop work order was issued because a follow-up inspection revealed that the dangerous working conditions had not been corrected.

When asked about enforcement of the Westray law, federal Justice Minister Peter MacKay said the provinces are responsible for laying charges, and that his government is working with all levels to ensure the rules are enforced.