The multicultural outreach scandal currently plaguing the BC Liberals has plenty of political irony, because over the years leader Christy Clark has forged strong connections with the province's South Asian community. 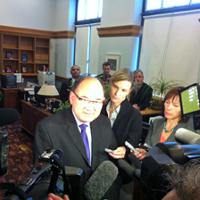 Clark's success in signing up Indo-Canadians in the Surrey area was critical to her narrow victory in the BC Liberal leadership race two years ago. She won six of nine Surrey ridings in that party vote.

In 2005 Clark relied heavily on support from Indo-Canadians when she unsuccessfully sought the Non-Partisan Association nomination race for the mayoralty in Vancouver.

But the decision by the premier's staffers to ramp up efforts to appeal to ethnic groups revealed in the leaked outreach strategy -- with its blatant partisan calculation and use of government funds -- may have undone Clark's stature among some South Asians and alienated the visible-minority communities it was designed to win over.

Sociologist Indira Prahst is among those who had been previously drawn to Clark but are now disenchanted. The Langara College instructor was a frequent guest on Clark's radio talk show, as an expert on South Asian issues.

Prahst later attended a fundraising barbecue for her friend's BC Liberal leadership campaign.

"She has a very warm-hearted nature," said Prahst, talking about Clark long-standing popularity in the South Asian community. "She is able to connect with anyone. It's genuine."

But the multicultural outreach controversy has left Prahst feeling let down by Clark and angry with the BC Liberals. And this reaction, she added, is growing in the South Asian community and could cost the party important swing seats in Metro Vancouver this May.

"It won't be taken lightly by the (South Asian) community from what I am hearing, because they had built a trust with her (Clark) and now they are seeing that trust compromised," said Prahst.

"Secondly, it's a slap in the face because South Asians have supported many BC Liberal politicians on various fronts. They've always been welcome in our gurdwaras -- and to be used like this is a breach of trust and it's disrespectful."

Sense of 'being used'

The leaked "Multicultural Strategic Outreach Plan" proposed to coordinate party, caucus and government workers to "re-engage with ethnic voters and the media." It talked about making inroads through apologies for past injustices, citing as a "quick win" a government apology for the 1914 Komagata Maru incident in Vancouver.

The reference to the Komagata Maru came across as cynical politics, said Prahst, as did the Clark government's recent decision to spend $11 million to host the inaugural Times of India awards event at BC Place Stadium on April 6, honouring popular Bollywood films, just prior to the May election.

"It's humiliating when politicians use important symbolic identifiers like the Komagatu Maru incident or a Bollywood film festival to win support."

Prahst said that Clark has been the victim of bad advice. "She really cared. And as a person, I really like her. But this isn't a very smart thing to do."

The multicultural outreach scandal, said Prahst, has left many South Asians with a sense of "being used." The academic said she heard this sentiment expressed in recent days among South Asians along the sidelines of neighbourhood soccer fields and in university hallways and lecture halls.

"I have had conversations with Sikhs across the Lower Mainland and some are expressing their disappointment and outrage."

Harjinder Thind, the host of a talk show on RedFM, a South Asian radio station, has heard a similar reaction. "Some people said they felt betrayed by the BC Liberals and by Christy Clark in particular because she had a very good relationship with the South Asian community."

The reference to the Komagata Maru apology as an example of a "quick win" has upset many South Asians who now see the apology as a "ploy," said Thind. "This has really disgruntled a lot of people, believe me."

Thind said that the BC Liberals will find it more difficult election fundraising among South Asians. "This has left a bitter taste in the mouth of the community."

The talk show host said that Clark had "won the hearts" of many South Asians through her work as a broadcaster on CKNW Radio.

"They saw her as a close friend. If people trusted anyone in the BC Liberals, it was Christy Clark," said Thind. "But those people feel really broken-hearted now."

Dave Hayer, the BC Liberal MLA for Surrey-Tynehead, has also condemned the outreach strategy. In a statement on his MLA website, Hayer called the plan "insulting to the intended targeted communities."

Shortly, after the multicultural outreach controversy broke in Victoria, a group of Indo-Canadian members of the BC Liberals called for Clark's resignation, saying she had made "the ethnic vote a joke in B.C."

The group's spokesman, Vikram Bajwa, a former Surrey mayoral candidate, said many party members felt that Clark's decision to bid for the Times of India Bollywood awards was an extension of the BC Liberals' drive to attract South Asians in the weeks leading up to the May election.