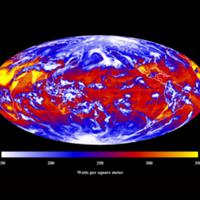 Physics, as we learned yesterday, gives us more than just a reason to think that the CO2 we've added to the atmosphere over the last couple of centuries might trap some heat. It's also allowed us to calculate exactly how much heat that CO2 is trapping: what scientists call its "radiative forcing" or "climate forcing."

Various lines of evidence show that the concentration of CO2 in the atmosphere has increased by about 40 per cent since the industrial revolution late in the 18th century: from 277 to 394 parts per million. (Most of that increase has occurred since 1970.) Readings from space show that less radiation at the particular frequencies of light that CO2 absorbs is leaving the planet. At the same time, measurements on the ground have detected an increase in downward radiation at the frequencies that agitated CO2 molecules emit.

Using these measurements along with laboratory data and well tested laws describing molecular radiation, physicists can work out precisely how much total radiation the extra CO2 we have put into the atmosphere will absorb and beam down to the surface of the Earth.

It turns out to be a staggering amount of additional energy flowing onto land surfaces, oceans and the lower atmosphere every second: about 9.5 million gigawatts globally, or 1.89 watts per square meter (plus or minus 10 per cent). For scale, that amount of energy is about 600 times all the energy used by all of humanity for all our industry, transportation, heat and light. To release that much energy with nuclear weapons, you would need to set off the entire U.S. nuclear arsenal every few hours.

To be clear, this is the extra energy that the CO2 we have already put in the air is trapping and pumping back into the Earth's climate system each second (more about that tomorrow). And it is merely where CO2 forcing stands right now. The energy being poured down on us will increase as long as the amount of CO2 in the atmosphere continues to rise.

But there's more. This huge influx of extra energy is only what CO2 radiates directly. As it turns out, CO2 has a further role.

The extra energy radiating out from the growing number of CO2 molecules in the atmosphere produces warmer air, which holds more water. Water (another "winged" molecular combination of one oxygen and two hydrogen atoms) is a powerful greenhouse gas on its own. In fact, water vapour and clouds are the most abundant heat-trapping agents in the atmosphere. Together they're responsible for three quarters of the global average of roughly 160 watts/m2 of warming from the overall greenhouse effect.

But water vapour and clouds are volatile. Water rains out of the atmosphere. If air gets cold it holds less water. If there were no CO2 in the atmosphere whatsoever, it would be cooler than it is and water vapour, clouds and their distinct greenhouse effect would almost completely vanish, plunging the planet into an ice-bound state. Another powerful greenhouse gas, methane, quickly decays into CO2 and water. But CO2 neither condenses nor breaks down chemically. So unlike methane, it stays with us. And whenever the air loses some of its water vapour, persistent CO2 provides enough warmth for the air to eventually refill with water -- and so again amplify its greenhouse effect.

As the planet's principal long-lived, stable greenhouse gas therefore, CO2 sustains the planet's entire greenhouse effect, even though it produces only 20 per cent of that effect itself. Correspondingly, by providing the conditions for more water vapour to remain in the air, ratcheting up CO2 levels also ratchets up the rest of the planetary greenhouse effect, ultimately magnifying the heat-trapping effect of CO2 alone by a factor of four.

Congrats, you are a quarter of the way through the course! Tomorrow (Saturday): How CO2 acts as Earth's thermostat. Find the entire series to date here.