Part 1: The Physics of Climate Change 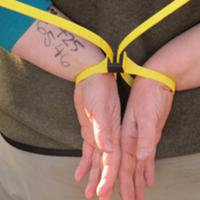 I Broke the Law to Defeat Climate Change

Most people know by now that we have been releasing large amounts of carbon dioxide, CO2, in the process of unearthing and burning coal, oil and natural gas to do things like make electricity, heat buildings, power machinery and propel our vehicles. It's also widely known that CO2 is a so-called "greenhouse gas."

But "greenhouses" don't necessarily sound so bad, depending on where you are, in what season. Plus, you may have heard that, even with all our fossil fuel emissions, there are still only trace amounts of CO2 present in the atmosphere: just four out of every 10,000 molecules in air. Surely a little added "fossil" CO2 can't have that much of an impact on things.

Well, yes. As it turns out, what CO2 lacks in volume it more than makes up for with formidable physical and radiative properties that make it the principal "thermostat knob" keeping Earth's climate in life's comfort zone.

CO2 gets its description as a "greenhouse" gas because, rather like the glass roof of a greenhouse, it traps a certain amount of heat in the atmosphere that would otherwise escape into space, thereby warming the surface of the planet.

How CO2 does this starts with the somewhat counter-intuitive fact that the Sun and stars aren't the only things in space that shine. Planets and their atmospheres do it too, radiating light in response to being heated up -- either by starlight or their own hot internal cores. Being so much colder than the Sun, they just radiate much less light, at much lower frequencies: mostly in the infrared range (the same "invisible" light that night vision goggles detect and TV remote controls use), rather than light in the range our human eyes can detect. You might say that, whereas the Sun beams its radiant energy "loudly" and in "treble," the Earth hums back "quietly" in "bass."

But for all its volume of high-pitched light, the Sun is very far away. By contrast, we have front-row seats to the Earth's low-frequency radiation. And even if we can't see the Earth's infrared light, we still feel its heat -- just as we might if we were sitting in front of an "infrared" electric heater from the hardware store. Some of that heat energy from the Earth's surface is next captured in the atmosphere, and again radiated out in all directions, including back down toward the surface.

Now, back to CO2. It turns out that the main reason the atmosphere radiates so much infrared light is its carbon dioxide. Radiating such low-frequency light is a nifty trick that not every gas can pull off. In fact, neither of the two much larger components of the atmosphere, oxygen (O2) and nitrogen (N2), can do this.

CO2 does because each molecule holds a central carbon atom, winged by two oxygen atoms that are strongly attractive to its electrons. As a result, when a CO2 molecule vibrates, (think of it as "flapping" its oxygen "wings"), its electric charge swings first one way, then another. This movement creates electromagnetic waves -- what we call "light" -- at the same frequency as the vibration that caused them. And in much the same way that a clock pendulum swings back and forth on a predictable beat, CO2 vibrates naturally at a fixed frequency that just happens to be the same as that of the infrared light radiating out from the planet's surface.

How much light our atmosphere's CO2 radiates depends on how much it vibrates. The more infrared light from Earth's surface strikes a molecule, the more it vibrates and the more energy it then radiates back out again as infrared light -- which we feel as heat. Since a huge portion of the energy the Earth radiates is in the same frequency band at which CO2 vibrates, the entire system acts like a planet-size amplifier for the Sun's heat.

Nineteenth century scientists, equipped with relatively crude instruments, believed that CO2's greenhouse effect must be small. They didn't doubt that CO2 could absorb and radiate a great deal of energy. They just thought the job was probably being performed already by the planet's much more abundant atmospheric greenhouse gas, water vapour (another molecule with a central atom and two "wings" -- in this case two hydrogen and one oxygen, hence H2O).

Two things began to change that view. High-resolution spectroscopy mapped out in detail the particular light frequencies that different gases absorb, and how much of it they absorbed. This revealed CO2 operates at different frequencies than water vapour. Research also determined that unlike water vapour, CO2 is found throughout the atmosphere even where water vapour isn't: at higher altitudes, over deserts, and in colder regions of the globe.

It turned out that we are being warmed just as much by the way our atmosphere echoes and compounds the effect of the Sun, as we are by the Sun itself -- boosting our planet's average temperature by about 30 degrees Celsius.

Tomorrow: Why CO2 heats things up.