What’s under the tarp? The mythic glory of an empire — the largest the world has ever known and built on white supremacist ideals — being chipped away. It hides a doomed memorial to Cecil Rhodes, the English imperialist who made a fortune in diamonds from the toil and deaths of black South Africans while denying them the vote.

“The native is to be treated as a child,” he declared. “We must adopt a system of despotism.”

The mosaic celebrating Rhodes loomed behind the basketball court of L’Ecole Bilingue Elementary School in Vancouver’s Shaughnessy neighbourhood until Emma Renaerts, reporting for The Tyee, asked... why?

She found that in 1910 the plaque was inlayed at the doorstep of a new school bearing Rhodes’ name. In 1977, when the school changed its name to L’Ecole Bilingue, the homage to Rhodes was kept to welcome all who entered. And when the school was knocked down and replaced for earthquake safety, someone decided the Rhodes nameplate should be preserved, moved to the playground and tilted on end, the better to behold. This was 2017, yet no one in charge saw the need to provide any context about Rhodes or his racist colonial era.

Renaerts discovered that parents at the school had questioned memorializing the father of apartheid, to no avail.

Two weeks after her Tyee story was published, the Vancouver School Board voted to get rid of the nameplate, and Monday the work began under oddly secretive conditions. Shielded from view, workers commenced chiselling away at the legacy of Cecil Rhodes.

It may seem a small bit of history caught by our intrepid photographer Dexter McMillan. Petty even, to some. 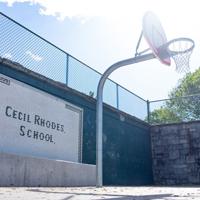 But as University of British Columbia historian Paige Raibmon explained in these pages, it matters that the names of Rhodes and many other white colonizers wallpaper the public realms of multicultural Vancouver.