It took Sarah Peacock several tries before she built up the courage to enter a tiny storefront in Saint-Di&eacute-des-Vosges, the French town she called home for nine months. 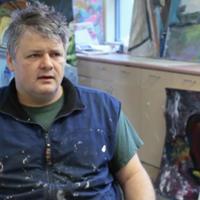 'Art as a Means of Survival'

L'Espace des Arts Plastiques was not your typical art studio: it was open to the public, and teachers leading workshops were helping -- rather than directing -- people to express themselves through art. Planting a seed in her mind, Peacock later founded Magpie's Nest, a new breed of community initiative in Vancouver that combines therapy and art under one roof. Her aim is to offer anyone the opportunity to express themselves via painting, drawing, knitting or any other creative form. Guided by art therapy professionals, Peacock says Magpie's Nest facilitates personal connection in a city known for social isolation.

"A big part of what we want to do is bring people in so that they're not isolated," she explains, "so that they're actually working with community members and doing some art and probably getting something deeper out of it."

Peacock's studio is one of several community art centres sprouting up across Canada, spurred by an initiative called the art hive movement. Vancouver's scene, still in its infancy, follows a path carved by artists in Halifax and Montreal. Art collectives in these cities have discovered baby steps and connectivity are the keys to securing funds, co-operation and success.

A Vancouver Foundation study on connection and engagement found that people in Vancouver do not feel strong ties to their communities. Neighbours barely trust or see each other, involvement in community events is low, and many feel like it is hard to make friends in the city.

Magpie's Nest fights to limit social isolation and create a space where people can feel safe and connected. This principle lies at the centre of an art hive.

The concept was formulated over 20 years ago and has matured in the hands of Janis Timm-Bottos, art therapist and professor at Concordia University. "Through the creative arts, many individuals and communities are recovering their creativity and ability to make change happen within their own lives and within their communities," explains Timm-Bottos.

Timm-Bottos currently runs two hives in Montreal, La Ruche d'Art and Studio d’Art Saint-Sulpice. Part of her research has aimed to spread the community-open art studio as a model for other cities to borrow.

Art therapy makes up the backbone of an art hive. "We call it community art therapy," says Stephen Legari, one of the art therapists at La Ruche. "It is a non-clinical, non interventionist model of art therapy where... we're really responding to the whole space and all the participants as opposed to running a form of workshop, group, or conducting individual therapy."

The idea is to create a space that feels like home: free, accessible and welcoming. "That warm welcome is really essential to the foundation of knowing, almost on a subconscious level, whether you feel safe and welcome in a space," Legari says.

Therapists let people know that they are entering a self-guided environment where people are encouraged to make whatever they want to explore. Art therapists work as facilitators in removing obstacles that might hinder the creation of whatever participants choose to make.

La Ruche also welcomes vulnerable groups: seniors, people referred from mental health centres, and folks living in low income brackets. "We don't know that upon them entering, but as we get to know them we get to know what their life is like," says Legari.

"Just do stuff," quips Daniel Collins, one participant of the Halifax Art Boat Project, a community art venture that just hit the waters this month. "Don't sit around waiting for money or writing for money... that's vital to long-term success, but at the same time, there's so much you can do without [it]."

The Art Boat was built from scratch in front of the Maritime Museum of the Atlantic. It came together with the help of volunteers and now invites all to come and create art.

According to Collins, there are several resources artists can tap into when launching similar projects. "I know that the normal bureaucratic channels can be really difficult and grant-writing is a pain, but there are ways to get involved in smaller scales that can bootstrap or kick-start a project," he says.

Before they began to look for money, Art Boat organizers considered what they could accomplish with what was readily available. One of their first moves was to partner with the Halifax Tool Library, a sharing initiative aimed at stockpiling tools and lending them out to community members that can't afford or choose not to buy their own equipment.

Another step was gauging community interest and building excitement. Collins' team brought outlined drawings of the Art Boat to children and asked them to draw what they wanted the boat to look like. The simple idea helped generate curiosity and allowed organizers to better understand the needs of the local community.

According to Kate MacLennan, community art facilitator for the HRM, community art projects generate a feeling of "needing one another." By participating in initiatives such as the Art Boat, people generate a stronger sense of identity and begin to learn more about their neighbours and local environment.

"It's really important from our point of view and the municipality to support that kind of work because we want Halifax to be a livable place," MacLennan says. "The more that people can support each other and have that support network through... projects like community art projects, it's better for everyone."

Last summer, Peacock visited a number of art studios in Montreal and realized Vancouver lacked similar initiatives. "There are a lot of artist collectives, there's lots of community art happening in Vancouver, but it's happening in a different way," Peacock says.

Several spaces in the city do offer opportunities for people to visit and create art, but they do not offer the same therapeutic benefits as a centre dedicated to this aspect. A few examples are the Vancouver Community Laboratory, Collage Collage and 4Cats Art Studio for kids.

Another difference is that studios don't reflect the particular needs of neighbourhood communities. "People have really similar needs and goals overall... like just to come together and work collaboratively," says Peacock. "But it's really reflective of the different neighbourhood that you're in."

For now, Peacock and her colleagues are still struggling to keep the studio afloat. Without city funding, they survive on volunteer assistance, donations and small grants.

At the moment, the collective faces an awkward transition. Registered as a non-profit, they don't qualify for some of the community grants they had access to before, and because of their young age, they are unqualified for other larger grants.

For now, they're operating out of a pop-up studio at the Vancouver Status of Women. But by the end of this month, Magpie's Nest will have to move. Peacock hopes that with a little creativity, the space will find a more permanent home.