“There can be no fellowship between us and tyrants — on the contrary there is complete estrangement.” — Cicero

In the last two weeks, the political decisions of the Kenney government have helped kill 192 Albertans with the Delta variant.

In just two days last week, the Kenney government contributed to the deaths of 64 citizens in Alberta’s overwhelmed hospitals.

If the pace continues, that’s the equivalent of four Humboldt bus crashes every two days.

For the record, this September was the third deadliest month of a pandemic in Alberta. Worse is on its way.

Since the province lifted all public health measures (everything from contact tracing to masks and school reporting), those decisions by Kenney have led to the deaths of nearly 500 people.

Alberta, along with Premier Scott Moe’s Saskatchewan, now own COVID-19 death rates (4.5 a day) that are three times greater than the rest of the country (1.5 a day).

It begins with struggling for air. As the body’s oxygen level plummets, the patient enters the ICU for ventilation. Next comes intubation, a Foley catheter and rectal tube. Then the kidneys fail as the body swells with fluids. Blood clots and skin sloughing come next. The lucky get to say goodbye to their loved ones by cell phone. The whole horrific process may take six weeks.

But deaths only capture a fraction of the scale of the disaster. Thousands of Albertans with Long COVID; thousands of surgeries cancelled; thousands of burned-out health-care workers; thousands of infected children and overflowing pediatric wards.

And the entirely preventable horror goes on and on.

There is only one reason for the province’s new Death Advantage: the choices made by Premier Jason Kenney, his cabinet and chief medical officer of health.

Last July that notorious Republican politician removed all public health measures for ideological reasons. By doing so he turned Florida’s hospital system, like Alberta’s, into a battlefield.

Since then, DeSantis ideology of slamming mask and vaccine mandates and trivializing the pandemic has killed more than 1,000 people a day.

Bestselling author Don Winslow was so appalled by Desantis’s disastrous leadership, he made a video on the public slaughter.

The video went viral. It explains that the Vietnam War killed 58,000 soldiers. But thanks to the neglect of DeSantis, COVID-19 will kill more people than that in Florida.

Alberta is not as populated as Florida, but Kenney’s decisions are having a Desantis-like impact. They may well destroy the province’s public health-care system.

Canada’s Criminal Code defines criminal negligence as anybody, who in discharging or failing to do their duties imposed by law, shows wanton or reckless disregard for the lives or safety of other persons.

In my view, that’s what Kenney, his cabinet and chief medical officer Deena Hinshaw have repeatedly done since July 1.

On that date they withdrew all public health measures too rapidly in the province with the nation’s lowest vaccination rates as the Delta variant began to surge.

Experts warned that the province was building a fourth wave.

He recklessly declared the pandemic over.

His government then attacked critics of its horrendously misguided policies including public health experts such as Amir Attaran, Joe Vipond and Lorian Hardcastle.

Every time Kenney now appears before the media, he engages in a reprehensible game of manipulation. He repeatedly blames, for example, the province’s full ICU units on the unvaccinated. Yet the premier and Hinshaw had three months to address the province’s low vaccination rates in central and northern Alberta. They patently ignored that sociological and anthropological challenge.

Instead, they pretended that “personal responsibility” and “choice” was a public health measure. It isn’t, and never will be.

“In a time of crisis — war, depression, natural disaster, health pandemic — an ideology that emphasizes the individual, the market and small government does not work,” is the reality recently acknowledged by political scientist Duane Bratt of Calgary’s Mount Royal University.

Yet Hinshaw said it was time to live with the virus while the premier vanished, apparently to Europe.

As a direct and immediate consequence, Kenney’s government abetted exponential viral growth. It made inevitable a fourth wave turned tsunami.

That predictable explosion has now killed hundreds of people, exhausted health-care workers and placed Albertans with cancer and other medical conditions in harm’s way. I call that criminal negligence.

The police do their job, make arrests and protect public safety. But then along comes Kenney. He removes the police, the courts and community helpers all in one fell swoop, promising “the best summer ever.” And then the killing begins.

And yet Kenney recently compared Alberta’s woes to COVID peaks in other provinces as just normal routine stuff.

“It is important to note that we are not the only province to have gone through such a challenging period during COVID,” he said.

Rubbish. Those peaks, also the product of negligent conservative governments, occurred long before the vaccines arrived.

Now Kenney is again getting the best advice — and rejecting it. He says he won’t introduce a “circuit breaker” lockdown to slow down transmission of the virus, as recommended by the Canadian Medical Association, because 20 per cent of the population won’t follow the rules. 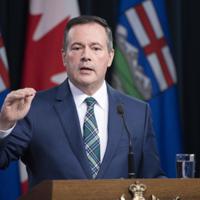 That’s like saying we won’t have laws against homicide because a percentage of the population won’t follow them.

In normal times, a premier that has failed his people and province so spectacularly would resign. Not in today’s Alberta.

Kenney has refused to step down.

Nor does Kenney’s cowered and complicit party have the guts or courage to force the bully out.

Nor does the province’s sheepish media. They belatedly express shock at the rising toll but fail to demand Kenney pay for his actions. Their pulled punches make them accomplices. (Some notable exceptions include Markham Hislop, Robson Fletcher and Graham Thomson.)

That leaves the hard work to Albertans. They have two choices. They can serve as accomplices to the destruction of their province, or they can exercise their civic duties and daily call for the resignation of Jason Kenney.

The dying won’t stop, and the pandemic won’t end until the chaos maker goes.