Things were looking bleak for Christy Clark back in late 2012. The NDP looked likely to win the May election. Corporate donors, hedging their bets, were writing big cheques to the New Democrats. The BC Liberals’ spending advantage — a key factor in winning elections — was shrinking.

And then Murray Edwards stepped in. The oil sands billionaire organized a fundraising dinner at Calgary’s Petroleum Club. In one night, oil, gas and pipeline companies helped raise more than $1 million to support the BC Liberal campaign — about 10 per cent of the party’s total contributions for the year.

The BC Liberals’ dependence on the province’s “Wild West” system of virtually unlimited political contributions has been well documented. Mining giant Teck, for example, has donated $2.3 million to the BC Liberals since 2005. Teck’s managers have a duty to spend money in shareholders’ interests — they expect a return on their investment.

And the Liberals collected $13.1 million last year, more than any other provincial party in Canada, even more than parties in the much larger provinces of Ontario and Quebec.

That money doesn’t just flow in. Political parties — recognizing the vital importance of having lots of cash to spend to sway voters — are constantly fundraising.

And they’re dependent on big donors and “rainmakers” — the people who can go out and line up big contributions. Unsurprisingly, those are also the people who benefit, personally or through policies that favour the interests of their businesses, from keeping the BC Liberals in power.

And equally unsurprisingly, those people tend to be pals of Premier Christy Clark.

Clark insists the fact that corporations and rich donors give millions doesn’t affect government decisions. But when an oilman can raise $1 million a night, will the BC Liberals really enact a policy that he hates? Or will they find a way to keep him happy and the cash flowing?

Here are some examples of the big donors Christy Clark counts on to stay in power.

B.C.’s top condo marketer is also a consummate and tireless political connector. The same sales skills that made him the “Condo King” have also made Rennie a key fundraiser for Christy Clark.

Rennie used his money, affability, and social networks to become a power broker — not just in Vancouver but also in Victoria through Clark and the Liberals. When Gordon Campbell decided to step down as premier, Rennie quickly became Clark’s patron in the BC Liberal leadership race at a time when many business people were placing their bets on other candidates. He believed the BC Liberals had a damaged brand and could only win re-election with a smiling new face — Clark’s.

Rennie was Clark’s top money-collector during the leadership campaign and spearheaded the fundraising that helped the BC Liberals win an upset victory in the 2013 election.

Rennie remained chief fundraiser for the BC Liberals and has helped the party raise $32 million since 2013, including $12.5 million in 2016, according to party documents. He has, through Rennie Marketing Systems contributed $290,550 to the BC Liberals since 2005. Rennie has long been close to veteran BC Liberal minister Rich Coleman and talks regularly with Clark advisor Carole Taylor.

Earlier this year Rennie announced he was stepping back as chief BC Liberal fundraiser and would officially resign after the election, saying his party is no longer in debt and had around $5 million for the election campaign.

Observers suggested Rennie’s reputation as a kingpin in Vancouver’s unaffordable real estate market had become an election liability for the BC Liberals.

The NDP and others have argued the BC Liberals adopted a hands-off attitude toward the housing price bubble in Metro Vancouver largely because the soaring prices benefited Rennie and other major real estate companies. (Eight of the top 10 donors to the BC Liberals since Jan. 1, 2016 were developers or builders, the Vancouver Sun reported.)

The Condo King had also become an easy target for critics of B.C.’s out-of-control “Wild West” campaign finance rules under which corporations and lobbyists funneled millions to the BC Liberals.

Rennie’s close connection with the major political and real estate actors in B.C. helped secure him a seat on the board of directors of BC Housing, the provincial housing agency, where controversy followed.

Despite his key role in Clark’s success, Rennie doesn’t always get what he wants. The condo marketer criticized Clark’s 15-per-cent tax on foreign real estate buyers, saying a speculation tax would have been more effective. Rennie, along with most of Vancouver’s business sector, was also not happy with Clark’s decision to put the transit levy to a referendum.

When the BC Liberals need money, Calgary billionaire Murray Edwards is ready to write a cheque or line up donations from Alberta’s oil, gas and pipeline corporations.

Edwards is a giant player in Canada’s oil and gas and mining industries. He chairs Canadian Natural Resources, which reported $11 billion in revenue in 2016; owns 40 per cent of Imperial Metals; controls Magellan Aerospace; co-owns the Calgary Flames; and is involved in other resource companies as well as Resorts of the Canadian Rockies, Canada’s largest ski resort company. In 2016, Canadian Business put his net worth at $2.7 billion.

Edwards made his fortune after starting work as a lawyer in Calgary in 1983 and recognizing the opportunities available in raising investment capital for energy companies and taking a stake in their success.

The connections appear to have paid off. The former NDP government loaned Imperial Metals $14.5 million to support the development of the company’s Huckleberry Mine in 1997. In 2004, the BC Liberal government decided to forgive $3 million in overdue interest, a great deal for Edwards, but not so good for taxpayers.

And critics were quick to draw a link between Edwards’ contributions to the BC Liberals and the Mount Polley mine disaster, when a dam failed and sent toxic tailings into Quesnel Lake. Imperial Metals owns the mine and has faced no fines or penalties.

A newspaper photograph taken in October 2015 showed Premier Christy Clark and the Vancouver Canucks’ owner and real estate tycoon Francesco Aquilini heading into an NBA pre-season game between the Toronto Raptors and Los Angeles Clippers at Rogers Arena, which his family owns.

The friendly relationship between the province’s premier and the scion of a billionaire construction and real estate family is about more than hoops.

Clark’s BC Liberals have received massive financial backing from the Aquilini family. In return, the Aquilini Investment Group has access to the Premier’s office, a valuable connection given the conglomerate’s various projects in B.C. And it has benefited from the Clark government’s inaction on soaring housing costs, noted Globe and Mail columnist Gary Mason.

The Aquilini family was second only to the coal and metals mining company Teck among the top 50 donors to the BC Liberals since 2005. The Aquilinis gave the ruling party $1.43 million over the last 12 years.

Francesco is one of five partners — along with his two brothers and parents — in the Aquilini Investment Group. But he is the public face of the holding company, valued at more than $3 billion according to media reports. 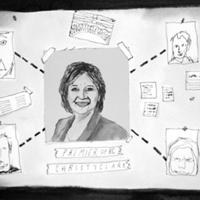 The construction and real estate business started more than 50 years ago by Italian immigrant Luigi Aquilini is now an empire that includes the Canucks, Rogers Arena, 17 million square feet of real estate in Canada, some of the largest blueberry and cranberry farms in North America, coho salmon farms in the Fraser Valley, and an interest in a proposed ski resort near Squamish.

The Aquilinis have also built close partnerships with several First Nations in Metro Vancouver, partnering with the Tsawwassen First Nation in Delta and the Tsleil-Waututh on the North Shore to build large residential projects.

A 2007 trial over the ownership of the Canucks heard how Francesco Aquilini socialized with BC Liberal minister Rich Coleman and former finance minister Gary Collins. The Aquilinis, in an attempt to cover all political bases, did give the NDP $120,000 prior to the last provincial campaign when the centre-left party was expected to win.

Luckily for the Aquilini family, the BC Liberals, in power since 2001, have been performing better electorally than the Canucks of late.