British Columbia has allowed big money to take over its political scene, says Dermod Travis of IntegrityBC. The independent watchdog has published an ebook detailing how the province’s political donation laws shape government policy and procurement.

The book, May I take your order please?, looks at the top donors to the BC Liberal Party and the contracts or favourable policies these donors have received from the government. Travis takes a close look at the 177 donors who have contributed more than $100,000 to the party.

Since then further reports, such as one from the Globe and Mail, sparked the return of $174,000 in illegal donations from the Liberals and $10,000 from the NDP, which has proposed legislation to tighten the province’s donation rules.

An excerpt from May I take your order please? is below.

“There are the seemingly benign announcements such as when then-Education Minister Shirley Bond joined members of the Vancouver Giants hockey team in 2007 to launch a new $6 million interactive virtual school called LearnNow BC.

The owners of the Giants – whose hockey players stood to benefit from the new online school – have donated $229,425.

In February 2016, the government quietly waived minimum wage requirements for six B.C. teams in the Western Hockey League. The league is facing a class action lawsuit over its failure to pay players the minimum wage. The owners of five of B.C.’s six teams have donated to the party.”

The Tyee spoke with Travis on Tuesday about the book.

Tyee: What does the book explore?

Travis: One of the things that has always intrigued me as I’ve been analyzing donations to the BC Liberal Party is they raise an incredible sum of money. It puts all of their counterparts across the country to shame. But what’s most startling is that they actually raise it from very few donors.

It’s important for the public to know that, because when you start assigning all of the various donations made from various companies to the actual unique donor behind those donations you get a better sense of the crony relationship between the government and its donors.

Ken Mahon, who most people would never really have on their radar screen, was a donor to the BC Liberal party. [He] never shows up as one of the top donors in any single year, [but] has in fact given the party more than a million dollars. How did he avoid the spotlight? He’s used 30 different companies to do it. [Mahon died in January.]

Is there hard evidence that these donors are getting something in return?

I set out to lowball part of these figures, so instead of looking across all the Crown corporations and the B.C. government I decided to start focusing strictly on public accounts to see much how much the top 177 donors to the BC Liberal Party have seen, not in the last 12 years, just in the last five years.

They’ve received $74.4 million in government transfers and $3.5 billion in government supplier payments. In infrastructure projects going back to 2005, we’re looking at $9.5 billion in projects. To give you another perspective of that number, four companies that have donated in excess of $800,000 to the BC Liberals, who are part of that ‘177 club,’ have received 20 of the largest infrastructure projects in the province worth $9.2 billion...

When you add all of these benefits together we’re talking literally tens of billions of dollars that’s going to 177 donors that keep the BC Liberal Party in business.

This is very complicated; how does the ebook present the information?

For the public it is going to be a difficult read. They’re going to have to get their heads around how various benefits have been extended to the big $100,000-plus donors to the Liberal party. The Vancouver Sun recently did a story on $46 million in provincial electric car incentives being provided to the public to buy electric cars. In Ontario and Quebec that program is run by the government. In B.C. the government is paying the New Car Dealers Association to run it for them. 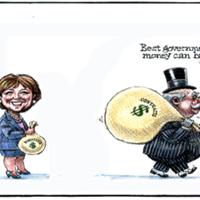 Why This Election Should Be About Corruption

You have donors and you have a number of companies the average ordinary person would look at and say “oh ya, that’s a group of companies” without knowing that they’re simply subsidiaries of each other and no matter what happens if [the government] awards a contract, it’s going to go to a Liberal party donor. Likely a donor that’s part of the 177 club…

What we’re not seeing is companies that are saying “I won’t pay to play and bid in B.C.”

So you’re saying the companies need to stand up?

The companies need to stand up who have decided to simply walk away from B.C. and say “We’re not going to play by those rules.” But I think British Columbians need to stand up and say, “We don’t want these rules either.”

It’s time to bring an end to the idea that the only way you get noticed by the provincial government is to make sizeable donations to the party.