“I think there’s an empathy deficit here and I think that leaders can afford to make mistakes in different areas but not empathy.” — CKNW host Charles Adler, April 7, on Premier Christy Clark.

Premier Christy Clark’s “empathy deficit” could be her Achilles’ heel in the B.C. election, based on her response to last week’s report on the wrongful health ministry firings and the subsequent suicide of health Roderick MacIsaac.

Clark is a formidable campaigner, and beat long odds to defeat the New Democrats in 2013.

But Clark enters the 2017 election with a 60 per cent disapproval rating. And rather than trying to improve her image, the premier is increasingly out of touch on sensitive issues.

“Today the CEO of the government of B.C., Premier Christy Clark, had a chance to give a human face of contrition, of responsibility, of professionalism, and, I’m afraid to say... our premier failed on all three,” Adler said Friday.

An apology is what MacIsaac’s sister Linda Kayfish asked for after the report was released.

“I want the premier to look me in the eyes and take responsibility for the destruction and heartache her government has caused. I want her to promise me that there is going to be true accountability here, from her on down,” Kayfish said.

But no — Clark let her deputy minister respond publicly to the report and later actually said it was the civil service — not her — that was responsible.

“Again, as premier, I know that [it] is wrong, absolutely wrong, for politicians to interfere in hiring and firing decisions in the civil service. We should not be doing that,” Clark said. “I offer again on behalf of the government the regrets and condolences I’ve previously offered.”

The ombudsperson’s report makes clear that Clark’s own office only started a review of the unjust firings after Kayfish held a 2014 news conference demanding answers.

“The evidence is clear that the government’s decision to conduct the review was prompted by the need to manage the larger political issue created by Ms. Kayfish’s news conference,” Chalke wrote in his report.

But it’s not just Clark’s response to what is one of the worst wrongful firing cases in B.C. history. It goes well beyond that.

Last week health officials reported that more than 100 people have died from drug overdoses in Vancouver alone so far this year.

Where was Clark’s empathy for those lost souls or their families? Nowhere. The premier has made no recent comments on the crisis despite those grim statistics.

And where is her concern? The government has added just $13 million for health authorities to deal with what was declared a state of emergency last year — and the death rate continues to skyrocket.

Plus, Clark and her government refused to consider an NDP proposal almost a year ago to restrict access to pill presses that can produce thousands of fentanyl-laced tablets an hour.

One grieving mother blamed Clark for her son’s death in March 2016 because he couldn’t get into rehab when he wanted to get clean — and later died taking drugs he didn’t know contained fentanyl.

“As far as I’m concerned there’s blood on her hands,” Michelle Jansen said after her son Brandon died. “The government has labeled fentanyl as a health care crisis, as an epidemic. Only just five weeks ago, approximately, the premier announces a task force, that’s not good enough.”

“If the premier thinks I’m going away, she’s sadly mistaken,” Jansen added. “I am not going to sit back and let innocent children keep dying because government officials are not doing enough.”

Clark’s lack of empathy, her avoidance of real life-and-death decisions, could cost her the May 9 election.

CKNW’s Adler, no bleeding heart liberal, was scathing about Clark’s inability to deal with difficult issues.

“Today the premier, Christy Clark, ran a clinic for political science students on how not to respond to a serious report on how deception and bullying and defamation destroyed careers and a human life,” Adler said. “The government of B.C. failed Roderick MacIsaac — that’s been documented — it failed him and many of his colleagues. And today the premier, Christy Clark, failed the people of British Columbia.”

Adler was shocked that Clark was so disconnected. 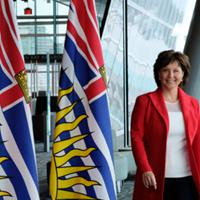 “Now, we’re close to an election – is this not a risky time for her to come across as a bit of a Marie Antoinette? It’s April and the election is in May,” Adler said. “She’s treating these lives — and they’re real life stories — like a nuisance.”

“This is what I’ve seen in politicians before when they get a little longer in the tooth, and government feels a little entitled and they’ve won maybe a few too many elections — it’s that ‘I don’t give a damn’ attitude. And when I see ‘I don’t give a damn’ this close to an election, that looks politically toxic,” Adler continued.

And in perhaps the most damning analogy he could make, Adler asked listeners to imagine if MacIsaac had been a federal scientist who took his own life after being falsely accused.

“Can you imagine Justin Trudeau reacting as coldly, as icily as Christy Clark?” Adler asked, before supplying the obvious answer — no.

The question voters may be asking is why Clark can’t show any real empathy in the face of tragedies.

And the answer to that could be politically fatal.