Crime. That's what most police officers sign up to fight, and why most Canadians are grateful to have such brave professionals carry out their difficult, dangerous and important duties on behalf of us all. Yet a recent head count on Burnaby Mountain indicates that approximately 65 RCMP officers have been assigned to prevent peaceful protesters from entering Kinder Morgan's injunction zone. 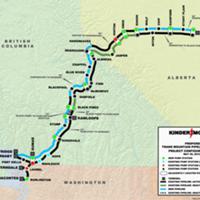 Given recent massive cuts to the RCMP budget by the B.C. government, and anxiety over crime in various Lower Mainland municipalities, is this really the best use of scarce police resources?

Policing costs are typically paid by local municipalities, and they are understandably not cheap. So how much does the current police presence on Burnaby Mountain cost?

The Tyee spoke to Staff Sgt. Major John Buis of the RCMP, who would not disclose any specifics for operational reasons. However, there are clues to shed light on this ironic situation -- where officers are enforcing an injunction strongly opposed by their own mayor and city council.

The City of Burnaby charges film crews $100 per hour for RCMP officers to provide traffic control at movie sets. The costs at Burnaby Mountain could be quite a bit more than that. A recent story in the Burnaby NewsLeader indicated that the injunction zone was being staffed in part by overtime specialists from the integrated tactical unit, emergency response team, negotiation team, as well as aboriginal policing services.

For the sake of argument, let's assume a per officer cost of $100 per hour. Keeping 65 police onsite round the clock would cost about $156,000 per day. Since ratepayers foot the bill for policing costs, it would seem the people of Burnaby are being forced by the conditions of the injunction to provide a direct security subsidy of slightly more than $1 million per week to Kinder Morgan. To put this in perspective, the entire policing budget for the City of Burnaby in 2014 was approximately $55 million.

Not that Kinder Morgan needs the money. A detailed analysis in the The Tyee by Robyn Allan showed that Kinder Morgan -- a U.S.-based "master limited partnership" formed from assets of Enron -- paid Canadian taxpayers a mere $1.5 million annually averaged between 2009 and 2013. The Trans Mountain pipeline provided Kinder Morgan average annual revenues of $172 million over this period, meaning the company paid an effective tax rate of less than one per cent.

The RCMP told The Tyee that staffing the injunction zone will not affect day-to-day policing in the Lower Mainland. But as the injunction drags on, is this accurate given that current resources seemed stretched to the limit? Crime was the number one issue in the recent Surrey election -- outpolling every other issue combined. Incoming Surrey Mayor Linda Hepner has pledged to add 148 additional RCMP officers to the local force.

Scaling up policing resources could be a challenge given the RCMP is facing $4.2 million in budget cuts from the B.C. government. The deputy commissioner of the B.C. force laid out the grim math in a public statement last August, and the implications for public safety in the province. The Mounties will have to eliminate 12 full-time positions from their well-regarded anti-gang Combined Forces Special Enforcement Unit. A further 13 full-time investigators will be eliminated from duties such as missing persons and unsolved homicides.

Acting Surrey Mayor Hepner was "astonished at the provincial cuts" and the lack of local consultation. "We didn't have any prior knowledge that this was going to happen. And I think therein lies a significant element of concern. We need to know what their intentions are and to be able to advocate for those before they happen, not after they happen."

Ongoing fights over funding won't make frightened residents feel any safer. Surrey has the highest overall crime rate in the Lower Mainland, up by 21 per cent over 2013. Langley has the highest Crime Severity Index in Metro Vancouver and the third highest in B.C.

Why do local residents have to worry about crime while a multi-billion dollar U.S. company that pays virtually no tax in Canada gets such a generous allocation of RCMP officers to protect a drill rig in a public park?

Why are dozens of peace officers who signed up to fight crime and protect the public instead being tasked with arresting high-profile Canadians, such as award-winning author J.B. MacKinnon and the chair of Simon Fraser University's microbiology department, professor Lynne Quarmby?

In the wake of RCMP budget cuts and increasing anxiety about crime, it seems incredible that scarce police assets are being deployed on such a scale to benefit a foreign company seeking solely to scale up exports of unprocessed Canadian resources. Is this the country we have become?

There is a crime going on. And it's up to all Canadians to help stop it.