About two months ago, I held up a sign in the Senate reading "Stop Harper!" Since then, I've been excited to travel in Canada and beyond, meeting with organizers, young people and grassroots groups who are concerned by Harper's agenda, and who are mobilizing to stop it.

My journey is just beginning, and this is the first of a series of dispatches I'll be filing to The Tyee about my experiences as I explore ways, outside of parliamentary politics, to affect social change with others.

I am hopeful after spending a recent weekend at Power Summer camp held in Prévost, Québec. Aside from the setting, a log cabin with a river nearby, this is not your typical camp. Instead of making crafts and canoeing, we practiced blockading roads and giving interviews with rushed reporters. Instead of telling ghost stories around the fire (or rather in addition), we share epics of social movements shifting power.

The Canadian Youth Climate Coalition (CYCC), a network of youth united to confront the climate crisis, hosted the Power Summer camps across Canada from the West Coast to the Maritimes. The coalition's work is made possible by the financial support of a number of unions, NGOs, and foundations. Nearly 200 young people have taken part. The goal of the camps is to give young people the tools to build a movement that can confront climate injustices. Climate injustice means that those who are most impacted from climate change and environmental degradation are the least responsible for it. For example, the dirtiest oil project in the world, Canada's tar sands, is poisoning the water and lives of indigenous peoples living in Fort Chipewyan, Alberta.

Activities ranged from media training to political strategy to learning to facilitate popular education workshops. Young people who have attended the camps are already putting their skills into practice -- for example, after the B.C. camp, a handful of participants transformed their van into a mobile climate justice workshop.

Some of the workshops remind me of the trainings for actions in the civil rights movement that I've been eagerly reading about as I try to discover what has made past social movements effective. Similar to Freedom Schools -- ad-hoc schools with the goal of confronting the great injustices of that time -- we take real world problems and design strategies to tackle them.

We explore how to use non-violent tactics. It is exhilarating to join with other young people who see that institutional means are not working and who want to learn about other avenues for making change.

We practice forming a blockade to try to stop a fictitious corporation from entering our territory and extracting our resources. We lay in the grass, arms linked. Beside me is Julie, a young woman working on the transition towns project for communities to free them from their addiction to oil. I am proud to be connecting with her and the others on the ground -- their work and passion for social change dispel the popular myth that youth are disengaged.

While it's true that some youth are disengaged, they are far from being apathetic. Many youth are deeply concerned with the state of our country and world, but they are not engaged because our society tells us that we cannot change things. When we look back at advancements in Canada, history books tell us that politicians won these victories for us. This is disempowering and leaves us waiting for the next great political leader to come around.

And yet, everyday people are not seen to be part of the process of social change. Our society tells us the story that change is made only by politicians. As a result, youth can't see themselves as agents for change either. In reality, it is the hard work of people of all walks of life, forming grassroots movements, that leads fundamental change.

By talking to older activists, we are reminded of this, and that we are capable of making change. I enjoyed learning from the seasoned activists who facilitated our workshops. Philippe Duhamel, who is one of the leaders of the biggest environmental movement Quebec has seen, told us of the many creative actions he has taken in his 30 years of organizing. Now a primary organizer of the march against the shale gas industry that has achieved a ban on the exploitation of shale gas, he has also delivered coal to Harper for his sabotage of climate talks in Bali, dressed up as one of Santa's elves, and set up a living room to block the bridge to the Department of National Defense to make the point that cutting military spending could end homelessness. As I heard about these actions, my mind was illuminated with new ideas for action. 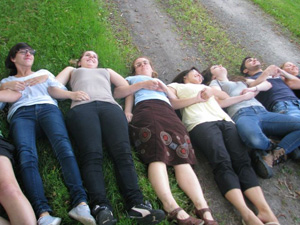 Learning non-violent tactics at the Power Summer camp in Prévost, Québec, in August. Photo: B. DePape

I had a really good late-night conversation with Amara from the CYCC about some diverging opinions within our movement. Some folks argued that direct action is nothing more than complaining and taking away time from building the alternatives we want to see, while others argue that building alternatives is a cop-out from challenging power. I start to think to myself, if we can't come to an agreement here at Power Summer, a place where we have common values and goals, how the hell are we supposed to create a big enough movement capable of confronting the Conservative onslaught and the systems of power fueling it?

But upon further discussion, it becomes obvious that it is not one or the other -- we need to mobilize to have more of both. It is mass mobilizations, such as the demonstrations against the war in Vietnam, that have stopped wars, and grassroots civil disobedience, such as restaurant sit-ins in the civil rights movement, that established civil rights. Building alternatives has also been key. We owe our social services in Canada to ordinary folks who joined together for a collective goal. Take Medicare for example -- people worked tirelessly to set up the community clinics that laid the groundwork for universal health care. At camp, we have people working on both of these things and we are stronger because of it.

We conclude that we need to be building alternatives with bigger political problems in mind, as well as take direct action to change the political climate and intervene in political decisions. Ideally, we can do both at once -- direct actions that also embody alternatives. A good example of this are Freedom rides in the U.S., where people of color sat at the front of the bus -- embodying the change they wanted to see. How might this take place in Canada for the environmental justice movement? What about installing solar panels on Parliament Hill or blockading pipelines with our bicycles?

Sometimes I find myself retreating into 'clicktivism' mode -- thinking that 'liking' other peoples' articles and profile photos on Facebook is building a movement. I'm also inspired to see all the thousands of people on the Internet who have responded so positively to my act of protest in Parliament. However, online activism can actually be more of a distraction than a spark for mobilization. As we meet face-to-face, linking arms in the grass, sharing movement victories around the fire, strategizing for the future -- I begin to see what building a movement looks like.

Later in this month, I will travel to Washington to report back on the massive acts of civil disobedience against none other than our very own tar sands. I'll be en route with a group of organizers and people from frontline communities. I'm anxious to share this experience with you! Stay tuned.