Starting today, Brigette DePape will be sharing with Tyee readers her traveller's notebooks. And what an interesting journey she has embarked upon. 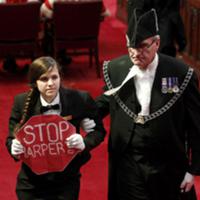 On June 3 of this year, as a 21-year-old page working in Canada's Parliament, DePape became a lightning rod for controversy by holding up a sign during the Throne Speech. The sign said "Stop Harper." That act got DePape booted from her job -- and onto the CBC and other venues to speak about the need for resistance at a moment when Stephen Harper's Conservatives had achieved, with their new majority, sweeping powers to change Canada.

Most mainstream media voices judged DePape harshly for violating her duties as a page and breaking the rules of Parliament. They scoffed at the idea her act might be effective. Though DePape was fired for her choice, some refused to see her as heroic, given that she didn't risk her personal safety, or even jail. Others praised her for strategically using the opportunity her position afforded, gaining visibility for a rallying cry that a single person could not have achieved through most other forms of protest.

DePape herself, appearing on The CBC television news show Power and Politics hosted by Evan Solomon, explained, "I decided to do this because Stephen Harper's agenda is destructive for people who are living in Canada as well as for my generation."

When Solomon pressed that it's "wonderful" for DePape to have a political view, but that she should have expressed it outside of Parliament rather than use her position as page as a "cover" for making her high profile protest, DePape replied, "Well, three-quarters of Canadians did not vote for Harper." She further explained, "I think we need to find creative ways to resist the Harper government. We are not going to stop Harper's agenda within the parliamentary system."

[You can watch that interview by clicking here.]

Taking Solomon and others up on their suggestion that the rogue page be afforded other opportunities for expressing her political ideas, I got in touch with Brigette DePape several weeks ago. She has agreed to bring Tyee readers up to speed on her latest travels and inquiries as they unfold, her personal investigation, she explained, into how political activism can effect change beyond the walls of Parliament.

Here are some thoughts DePape shared by email yesterday, as an accompaniment to her first dispatch, which runs today as our cover story.

What have you been doing since your attention grabbing moment in Parliament on June 3?

"I have been experiencing a new reality -- of people's movements, organizers and activists. It would be misleading to say that this is completely new to me. I have been curiously peeking into this world for a good part of my life, most recently at the G20, in Bolivia, and at the World Social Forum, and now I am happy to be more fully immersed in it.

"I've been working with Indigenous groups and climate justice groups to pressure the government to repay its historical and climate debt. As I do so, I am enjoying reflecting on the non-institutional means for creating change and writing about it.

"I've also been traveling through different parts of Canada to meet community organizers and activists. Folks have kindly welcomed me to stay on pullout beds in their homes. My favorite thing is to scan bookshelves to find books like A People's History of the United States by Howard Zinn and Listening to Grasshoppers: Field Notes on Democracy by Arundhati Roy. Books like these have become my textbooks.

What have you learned along the way?

"At university, I missed the class on social movements because it was full. Instead, I'm learning about them in another way, by joining them.

"Social movements play the critical role of making real solutions (ie. ending subsidies to oil companies) politically possible and throwing false solutions (ie. non-binding agreements) out the window. As I join with social movements, I see how this plays out on the ground.

"It is inspiring to meet the many people who have chosen to do this critical work. Though they are more than qualified, they have rejected high-paying and high profile jobs to work in solidarity on some of the most difficult and important struggles we face today.

"It is easy to understand why they have chosen this path. Not only is it the most important work that needs to be done, it is incredibly fulfilling.

"For a long time, I gave up on addressing fundamental problems like climate change. Though I cared deeply about them, I did not believe I could do anything about them, so I became disengaged. I am re-invigorated to meet with clear-eyed activists who are confronting real issues head on, despite the status quo and politicians failing to act.

"But activism is a full-time job that is extremely engrossing and challenging. As an older activist told me, given the trying nature of activism, it is important to keep a garden. By this he meant that we need to have a space for ourselves that is separate from political activism. This could mean tending to a physical garden, but for me, having not yet inherited my Mom's green thumb, this means dance parties in the kitchen with my roommates, reading and writing poetry, and spinning fire."

Any regrets about your actions on June 3?

"My only regret would be I wish I had not given up my sign 'Stop Harper' sign to the security guards. Imagine the money we could have gotten for grassroots struggles by auctioning it off!"

What would you say to critics who say those in power are pleased to see young people's political efforts poured into direct action, because it doesn't immediately threaten their hold on political power via the parties in Parliament?

"I think it's quite the opposite -- that those in power are dismayed to see young people's political efforts poured into direct action, precisely because it does threaten their hold on political power. This is the reason that the establishment and the mainstream media comes down so hard on young people when they take direct action. It's clear that we are not going to achieve change through the parliamentary system. Instead, we need to boldly choose to use street heat."

Why have you decided to write this series of dispatches for The Tyee?

"I am learning a lot through my journey and I want to share it with friends and readers in Canada. I see this as part of a dialogue. It is a way of communicating with others who are on a similar journey, as well as connecting with those who are on different paths."

What do you hope readers will take from this dialogue?

"There are a lot of misconceptions about activism and social movements in the mainstream discourse. In large part, this is because activism often challenges the concentrations of wealth and power that mainstream institutions function to maintain. As I begin to discover the power of social movements, I hope to dispel some of these myths. I hope that readers will think twice about non-institutional means for affecting change.

"I want to give an honest account of some of the challenges and barriers that arise for grassroots movements. I also want to convey some of the things that attracted me onto this path less traveled and which make joining with others to build a movement not only necessary, but truly irresistible."