During the fire that tore through Lytton, Jeff Chapman watched in horror as his parents were killed where they were sheltering in a ditch from the flames.

The devastating fire destroyed around 90 per cent of the town, and followed a punishing heat wave that broke national records as Lytton became the hottest place in Canada — ever — at 49.6 C.

In an interview with the CBC, Chapman raised an important question.

“Somebody has to be liable for this,” he said.

Attention has been focused on the possibility that a train caused the fire. The federal government suspended rail traffic in the area Friday.

But the main cause, scientists say, is global heating that created the conditions for the fire.

And who is responsible for climate change — and for protecting us from its consequences?

While experts can’t yet point a finger of blame at a single person or company for the Lytton fire, scientists gave us a single species to blame.

Humans caused the heat wave, according to a report by 27 scientists from North America and Europe.

“An event of this extremity would have been virtually impossible in the past — but we’re going to be seeing more intense and more frequent heat waves in the future as global warming continues,” study co-author Sarah Kew said during a press conference. Kew is a postdoctoral researcher at the Royal Netherlands Meteorological Institute.

Since the Industrial Revolution the planet has warmed 1.2 C. Still, under today’s climate conditions, the recent heat wave was likely a one-in-a-1,000-year event, the report says.

But global warming of even 2 C would mean heat waves like this could occur every five to 10 years, the report warns. And with current global emissions levels we could hit those temperatures by 2040.

The report authors stressed the importance of preparing for future extreme heat events.

“People don’t need to die in heat waves,” said co-author Kristie L. Ebi, a professor at the University of Washington, in the press conference. “From a public health perspective, almost all heat-related deaths are preventable.”

That brings us to the first question. If human-created climate change generated the heat wave, who was responsible for keeping our communities safe?

Responding to extreme events caused by climate change, like heat waves, wildfires and sea level rise, falls under the responsibility of the provincial government, which works with municipal and First Nations governments to adapt and develop responses.

He’s referring to the draft Climate Preparedness and Adaptation Strategy the government published this spring.

Gage is extremely critical of the plan and says it suggests the province isn’t taking climate change seriously. (The Tyee spoke with Gage right before he published a critique of the province's emergency preparedness, which you can read here.)

“I’m really disappointed,” Gage says. “I don’t think you can say this is anywhere close to what the public would expect from a plan about something that is this urgent. It’s a weird document.”

The strategy says this year the government will “improve the provincial response to extreme heat and wildfire smoke for the unhoused and housing insecure populations.”

That’s the whole plan, Gage says, with no further details. They’ve basically just committed to not making it worse, he adds.

Gage says B.C. has been upgrading its climate change adaptation strategy since 2018 when then-auditor general Carol Bellringer released a scalding report criticizing the province’s strategy, which hadn’t been upgraded since 2010.

The province responded by first releasing its 2019 Preliminary Climate Risk Assessment, which ranked the top 15 climate change-related hazards in the province, and then with the new updated strategy this year.

In the 2019 preliminary assessment heat waves were ranked the third most hazardous threats, and were defined as temperatures above 32 C for more than three days. That sort of heat wave could cause 100 heat-related deaths, 1,000 injuries and over $100 million in economic loss, it says.

Gage sputters a bit as he compares that to the reality of highs of almost 50 C. “Just 32 C sounds almost idyllic after what we went through,” he says.

Chief coroner Lisa Lapointe says there were 719 deaths during the heat wave, three times what they would normally be, and that the number of heat-related fatalities could go up as more deaths are registered.

The Tyee asked the provincial government if it was changing its emergency preparedness policies following the heat wave.

In an emailed statement Emergency Management BC said the province is updating its Emergency Management Act to better reflect the B.C. Declaration on the Rights of Indigenous Peoples Act and lessons learned from the COVID-19 pandemic and recent floods, heat waves and wildfires.

The province is also “looking at ways to work with local governments so they can better plan and prepare for the potential of similar events in the future.”

This May B.C. cancelled a program that offered grants to municipalities for climate action.

The Tyee asked the Ministry of Environment and Climate Change Strategy how it would update the province's overall climate adaptation strategy after hearing human-created climate change caused the heat wave.

“This new study provides further evidence of the seriousness of the climate crisis and the need for strong, co-ordinated global action to reduce emissions and build a cleaner economy for everyone,” the ministry said in an emailed statement.

It pointed to CleanBC, its plan for how B.C.’s economy will reduce emissions and adapt to climate change, and to the Climate Preparedness and Adaptation Strategy that Gage described as inadequate. The province is also offering rebates on electric heat pumps which can warm houses in the winter and cool them in the summer, the ministry said.

The ministry adds anyone can read the draft strategy and provide feedback until Aug. 12. Gage encourages people to respond and contact their local MP and demand a plan with tangible and measurable steps.

Then there’s the second question of responsibility. If human-created climate change generated the heat wave, who played an outsized role in causing it?

According to numbers from the Climate Accountability Network, less than 100 fossil fuel companies are responsible for two-thirds of the greenhouse gas emissions which caused human-created climate change.

Three companies — Chevron, Exxon Mobil and Saudi Aramco — make up 10 per cent of those emissions.

Gage says if producers know a product, like pesticides, tobacco or opioids, causes harm and continue to market it, they’re legally responsible for the harm it causes. This should also apply to carbon emissions, he says.

For the past five years West Coast Environmental Law and 62 other environmental organizations have been calling on local municipalities to launch a class action lawsuit to recoup the billions spent adapting and responding to climate change.

There are 25 similar court cases playing out in the United States, but none in Canada so far, Gage says.

But he says the recent heat wave might change that because the entire province went through it together, instead of one town being impacted at a time.

“People are dying, people are getting sick,” he says. “They can understand why it’s important to sue to try and make sure people who were affected are compensated, or that we have the resources so we don’t have to go through this again.” 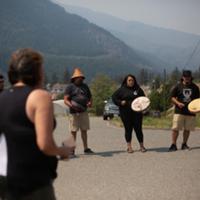 I Went Looking for Heroes of the Lytton Fire. I Took My Camera

Suing fossil fuel companies would also hit their perceived profitability, Gage says. Companies now make money because they don’t have to pay for the cost of pollution or climate change, which creates little incentive to change.

But a lawsuit requires a company to notify shareholders of the potential liabilities and brings pressure for change, Gage says.

During a lawsuit a company also has to show the court it’s been acting in a responsible way when it comes to the threat of climate change.

Gage says over the past five years, as U.S. lawsuits have been filed, he’s seen companies on both sides of the border distance themselves from organizations that deny climate change, start supporting carbon taxes and investing in renewables, he says.