The British Columbia NDP has long had close connections to the province’s labour movement, but the community offices of Premier John Horgan and the party’s 56 other MLAs could soon be behind picket lines after constituency assistants voted in favour of striking.

“I think the strike vote shows that pretty much everybody is on the same page,” said Stephanie Smith, president of the recently renamed BC General Employees’ Union that represents the 173 BC NDP constituency assistants.

“A strong strike mandate sends a really good message to the employer that members are unified, there’s a lot of solidarity, and that they’re willing to take steps to get the collective agreement that they want to see.”

Constituency assistants, or CAs, are employed by the MLAs in whose offices they work, and office budgets are set by the Legislative Assembly Management Committee. They play a largely non-partisan role addressing questions from the public and connecting British Columbians with government services.

BC Liberal and BC Green constituency assistants are not unionized.

The collective agreement for BC NDP constituency assistants is negotiated with the caucus. Bargaining began last September, took a pause during the provincial election, and then after resuming reached an impasse by mid-June.

In a vote held June 28 to 30, the NDP constituency assistants voted 94 per cent in favour of strike action.

Smith said the main issues are wages and job security.

“The job has evolved,” Smith said. “It is much more complex. There’s a lot of responsibility put on CAs, so they want to see wages that are commensurate with the job duties and the responsibilities.”

Constituency assistants also want a severance provision, training allowance or other measure to address the fact many lose their jobs when an MLA retires or fails to win re-election. “This is a very precarious job,” Smith said. "For instance, if an NDP MLA retires and another NDP MLA is elected in that riding, the constituency assistant would have to re-apply for their job with no guarantees of being re-hired.”*

There are also issues around occupational health and safety that need to be recognized, she said. “Because constituency assistants are the anchors of government within their regions, their areas, if there are protests or angry constituents, CAs are really on the frontline of receiving that.” 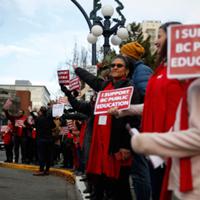 Smith said she knows of one Vancouver Island MLA office where there’s a weekly protest. “There’s a different level of protest that we’ve seen emerging over the last few years.”

A May 14 update on the BCGEU website said the bargaining committee and employer had agreed on new language regarding mental health and office closures, protests and personal safety.

Chek News recently quoted Moran saying, “We’re pretty disappointed that we’re here and so far apart after quite a long time of negotiating.”

The next step is mediation, which has been booked for July 15 to 16.

Smith said she’s hopeful the mediation process will lead to an agreement.

“Always our goal is to secure a collective agreement with the least amount of disruption,” she said.

* Story updated on July 7 at 2:31 p.m. to correct wrong information from the BCGEU on constituency assistants’ working conditions.