We have talked of much today (already enough for a series of articles), and it’s time to put down our glasses, stand up and breathe in some chill fresh air.

On the snowy grounds around her house, we roam what Diana Beresford-Kroeger has built over decades, a living library full of rare and unusual denizens.

Each unique book has a story, as well as a special genetic lineage. She rattles off their Latin names.

The blue western fir, one of a kind, stretches its towering arms above the roof of her home.

“It is super-resistant to drought and water loss,” she says.

Then there is Gleditsia triacanthos, a wild honey locust, bristling with spines. Its bean pods once fed migrating herds of buffalo in southern Ontario.

Beresford-Kroeger then points out a Catalpa speciosa, known to many as a cigar tree.

“We don’t know where it originated,” says the botanist, “but First Nations used its wood to make baskets for storing combs because it kept the lice and fleas away.”

An Ohio buckeye. A Manchurian apricot. A row of black walnuts (“it produces the best nuts for this area”). Several native bass woods, which both insects and wood carvers adore. A grove of eastern cedars. A tulip tree. A cucumber tree. A blue ash. White cherries and other fruit trees.

With time and muscle Beresford-Kroeger and her husband, Christian, have planted more than several thousand trees on their 160 acres in Merrickville, Ont.

After the botanist recognized that singular and sacred trees were coming down everywhere, she simply decided to turn her home into a genetic library and a research station.

Called Carrigliath, or Greystones, her land offers shallow soils, but it is rich in wonders.

To raise consciousness about the importance of trees, she and Christian started an ambitious tree giveaway plan in 1995.

Their Millennium Project eventually gave out 750,000 seedlings and saplings from 22 rare trees to 4,500 Canadians. Each tree seed and sampling came with documentation, provenance and planting instructions.

Even the Hells Angels arrived early one morning in a noisy cavalcade to adopt some black walnut trees.

Beresford-Kroeger was dumbfounded but generous. “I still get the shivers when I think about them with their nuts and bolts hanging off their ears and eyes.”

While selecting the best nuts, seeds and saplings for that project, Beresford-Kroeger noticed that “mother trees” stood out in the forest because they tended to dominate things.

They also offered the best quality of nuts and saplings. They, too, appeared to be focal points of wildlife activity and leafy vitality.

She first found their remnants on walks in the nearby forest. The botanist and her husband often came across large boles of trees. Some belonged to long-felled beech and cedars. She even discovered a bole 18 feet in circumference that belonged to a pignut hickory, brought down 100 years ago.

“Imagine. Here on this land. There is no soil. There is nothing but rocks. How many hundreds of years had it been growing?”

And that’s when she got the idea that mother trees survived the best, grew to phenomenal size and supported maximum growth.

She tested the idea by planting 10 maple seeds in a pot. “And you let them grow on a windowsill and a dominance happens. The 10 seeds decide between them that one has to grow taller. You will always find that.” She tried with marigolds and tomatoes and found the same result.

“It seems to be a universal rule. There is always one dominant tree, and it has a protective ability towards its children and the seedlings all around it.”

The black walnut makes a good example, she says. It produces primary protein. But the tree also protects its nut-making abilities by sending chemicals into the soil to get rid of competitors growing near them.

“The walnut is a brain repair tree and an anti-cancer tree, but it maintains that chemistry at the cost of many other species around it.”

In her own garden she has watched a young walnut wage unceasing war against neighbouring fruit trees as well as her vegetable garden, greatly reducing its productivity. The Brazil nut does the same in the Amazon, as does the Chinese hickory in the once great forests of China.

“You have to look at the forest with a different eye and not by the way of the biggest two-by-four, just to see how the game is played in the forest,” explains the botanist.

And when you do, says Beresford-Kroeger, you see that the mother trees really don’t allow other trees to edge into their territory until they are very mature.

Mother trees also set standards. “They set the bar for the forest in some ways and then they are setting the bar for the atmosphere too. There are many things invisible to the eye that they produce.”

In Eastern Canada, a pignut hickory ranks among trees as the top species for capturing carbon as a building block of growth.

In this respect mother trees are leaders. “They have the greatest canopy. If you put all the leaves together out in a big quilt, you would cover many acres — whole acres of canopy sequestering carbon dioxide and liberating oxygen. These mother trees are really too big to comprehend in a holistic manner.”

Based on years of observation, Beresford-Kroeger posits that mother trees wear a fragrant apron of chemicals that attracts all kinds of life. “It is like a green metropolis. You don’t notice it until you stand under it, smell it, touch it and see it.”

“I also call them epicenter trees. They invite the birds and insects. It is like there is a call from the tree and maybe the birds hear it. I have no way to know it. Maybe they geoposition the forest and other species come to it. I say maybe, here. There is never a day without learning in the forest.”

Mother trees, which can be found in every global forest, have also inspired the author and energized her work. She will approach them and talk to them as her Irish ancestors once did in ancient oak forests that no longer exist. 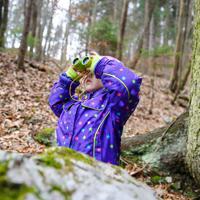 “What happens to me when I’m asked to write about a species of trees — I’ll go out to that species and ask the tree to help me,” says Beresford-Kroeger.

“Invariably, I will sit down by the tree in total silence and go and enter into the silence of the tree. That is kind of like a prayer, and the tree understands that you are making that prayer.

“And then you come back inside, and you’d be surprised what kind of extraordinary language you can muster to describe that tree. It is like the tree gives you a box of paints, and, somewhat like Georgia O’Keefe or Emily Carr, you paint the colour of the words the way the tree has directed you to do.”

Up next in this series: Liberty to act. What a lifetime steeped in natural science and Celtic heritage has taught Diana Beresford-Kroeger about the truest form of freedom. Read it here. View the whole series here.