It's mid-morning in early April. I'm sitting on the ground outdoors. It's chilly. 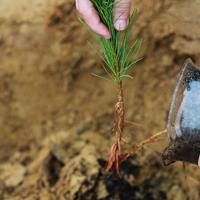 I'm also in the middle of a regular class at Cloudberry Forest School, on the outskirts of St. John's, Newfoundland. I'm sitting with eight three-to-five year olds. We're in a loose circle listening to early childhood educator Laura Molyneux talk about birdcalls.

On a recent walk through the woods, Molyneux tells us, she heard different birdcalls. Can the kids guess what birds they were by their call?

"Crow!" the kids cry out in unison.

Sounds like your average preschool bird lesson, except we're sitting in a forest clearing where the kids have been playing for an hour already -- although other than the occasional crow, it's fairly devoid of actual birds calling. It's a cloudless sunny day, but the forecast is for temperatures below zero down to minus five. Apart from the occasional patch of dead grass, snow and ice cover the ground.

No one seems to mind. The children and their teachers are all clad in snowsuits, boots, mittens and hats. The latter have been coming on and off as playing warms the little ones 'til the chill air makes them cold again. Soon they'll all go inside for a snack and to use the washroom. Twenty minutes later they're back outside, running, sliding, and climbing a steep snowy bank until their parents arrive at noon.

Cloudberry is the province's first "forest school," where the classroom is the same stretch of woods day in and day out, rain, shine, or snow. Other than the snack and bathroom break, which also serves to warm up frozen appendages, the majority of their three-hour day is spent out of doors.

The preschool is also consciously also play-based and child-directed -- meaning that instead of adults mapping out every minute of the day before the kids even arrive, each day at Cloudberry starts by asking the kids: "What do you want to do today?" Lessons are built around the answers.

Adults often forget that play is how kids learn best, said Molyneux (who, full disclosure, has been a close friend for 16 years). "You learn through experience, you learn through interacting. And I think the child-directed process of forest school is the perfect way to get that process of learning happening," she said.

Out in the woods, science education and playtime are married in one activity that also helps kids reach other educational, social, and physical development milestones.

Returning frequently to the same spot behind Clovelly Stables, a non-profit horse riding and boarding organization, the kids observe how the woods change as the seasons pass: a small creek near the clearing freezes, flows, floods, or lies stagnant; birds and other creatures disappear and reappear as the temperature warms; the weather changes daily, sometimes several times a day.

"The whole idea of forest school is to observe, explore, and experiment," said Cloudberry co-founder and educator Nora Trask.

"Every day we're examining scientific principles. Is it bigger? Smaller? Is it wet? Is it dry? What happens when this goes with this? Why is this happening over here? What do you see? What do you hear? What do you feel? Why do you think this is?"

One School's Approach to Nature Ed

Strawberry Vale Elementary in Victoria, B.C. has practiced nature-based education in one form or another for 20 years. In the last three, it's stepped up efforts to take education outside, with both in-class and school-wide projects.

"Our goal was for every teacher to answer the question 'How does nature-based education enhance learning?'" said Grade 4 teacher Lenny Ross.

Individual teachers answered by devising class projects like doing maintenance for nearby Rosedale Park in collaboration with the city, raising and then releasing salmon fry into local rivers, and taking daily morning walks around the neighbourhood.

The entire Strawberry Vale campus is involved in creating a "Nature Play Perimeter Pathway" -- an obstacle course of sorts on school grounds that includes a "fallen forest" and "boulder park" where kids get to play on rough terrain. It's also got an edible garden, a wall for creating temporary outdoor art, and a circular ground maze.

With all that, we have to wonder how they get kids inside.

Why does a beaver slap its tail?

While specialized training isn't strictly necessary in order to start your own forest school, the shift to a classroom with no walls demands some adjustments. And only a handful of post-secondary programs in Canada offer outdoor education classes.

Both Trask and Molyneux have taken training offered by Forest School Canada, a professional skills-enhancement organization that developed its program in collaboration with the United Kingdom's Forest School Association.

"And then," said Forest School Canada's coordinator of professional development, Chris Filler, "we add the layer of Canadian cultural perspective that would make us unique based on the places that we operate."

That Canadian perspective is something Filler struggles to articulate: "Every day we talk to educators across the country, and they tell us" it changes from educator to educator, he said.

One way Canada stands out is simply in how our outdoors differs from those of the U.K., Sweden, or Germany. But the outdoors is also immensely varied across Canada, from the boreal forests of the east to the rainforests of the west.

Then again, there are some uniting elements, like our national animal. The beaver, whose thick fur gave Europeans motive to create Canada and which appears opposite the Queen on a nickel, is native to every part of the country.

But a child who sees living beavers every day at school will likely be more curious about them than a child who only sees beavers in books, on TV or coins, Filler believes.

"Not because we tell them they need to be [curious], but because they just saw a beaver that morning slap its tail and they want to know, 'What's that all about? Why would that beaver slap its tail?' Then we open an opportunity for science literacy to enter," he said.

Every tide changes the classroom

Also a sessional instructor at the University of Victoria, Filler has helped create several outdoor programs in the Greater Victoria School District.

Saanich has an outdoor preschool. Two new "coastal kindergarten" programs send kids outside for the first half of every day, walking to either Beacon Hill Park or Ogden Point beach, and spending the second half of the day in the classroom.

A park with trees, plants and woodland creatures, or a beach with shells, tidal pools, rock and sand formations, provide infinite opportunities for what Janine Roy, district principal of learning initiatives, calls "authentic" learning: learning that's important to kids in the moment.

On a recent visit to James Bay Community School's coastal kindergarten at Ogden Point, she said, she found students doing "a little numeracy activity with the teacher: 'What's smaller? What's bigger? What's the same?' They were going through and finding loose parts on the beach for this math activity."

Instead of using the limited number of props available in a classroom in order to demonstrate the difference between big and small, few and many, students have a whole beach full of critters, wildlife and washed-up seadrift that all fit into the lesson.

Imaginations run free in the open air and questions go way beyond the size and the shape of an object. What is it? Why is it on the beach? How did it get here? Each query sparks more learning opportunities.

Of course, it isn't possible to answer every question in a day. So, like Cloudberry, coastal kindergarten students return day after day to the same spot. This provides not only the chance to do deeper research into a question, but lets students witness the changes in the landscape, flora and fauna as seasons change and tides ebb and flow.

More fun for teachers, too

Not every school has easy access to a park, beach or forest. But getting out from in front of a whiteboard appeals to teachers, too. When Roy organized an after-school professional-advancement series for teachers this past school year, two sessions dedicated to outdoor education left participants wanting more. "The elementary teachers got together and planned the whole series [on outdoor ed] for next year," Roy said.

Meanwhile, Roy said many schools in her district are putting some kind of nature-based education into grades all the way up to high school, although they're most popular though in elementary and middle schools.

"One teacher shared [with colleagues] an exploratory program [for students] that goes on all year for Grade 6 students," she said, "where it's outdoor education, where they're learning orienteering skills, photography skills.

"They were looking at all sorts of areas in the environment, and how they could make a difference. It really was social-emotional learning based in an outdoor setting."

And no matter what the nominal subject, lessons taught out-of-doors almost can't help but have an element of science in them.

"Science is the study of how our world works," said Lenny Ross, who goes outside to teach science to Grade 4s at Victoria's Strawberry Vale Elementary. "For little kids, it starts with just a very small world."

As kids age and learn, their worlds expand. "So by the time they're leaving elementary school, we're not just looking at the environment outside, but we're looking at our whole country, our planet," Ross said.

"There's a continuum of natural curiosity about our world and our place in our world. That curiosity is what drives science."

Back at Cloudberry Forest School, Molyneux and Trask likewise find a way to work preschool-level science into every interaction with their students.

"We're developing the foundation of how to make a hypothesis, how to experiment, how to conclude, and then how to document that experience so that you can draw on it again and compare it," Molyneux said.

Whether kids are comparing the sizes of shells on a beach or listening to sparse spring birdcalls in the woods, outdoor-based education looks a lot more fun than ordinary classroom schooling. Probably because it is. It's also instilling a foundation of serious science literacy that could last its lucky participants a lifetime.