Last November I travelled to Merrickville, Ontario to visit with the legendary botanist and bestselling author Diana Beresford-Kroeger. Between cups of tea and glasses of whiskey, we talked about climate change, the importance of forests, the nature of freedom and her new book To Speak for the Trees.

My host, who comes from a very ancient Irish family, has a lot say about the state of this world. She speaks with a rare wisdom, sparkling humour and an essential clarity. Above all she offers great spiritual insight.

She proved so fascinating and generous that our conversation stretched over two days. And when it came time to write about it, I realized that could never fit into a single piece.

And so, over the next five days here on The Tyee, you are invited to join me as an extended guest of one of Canada’s greatest scientists. Photographer Colin Rowe’s accompanying images convey, in subtle details and fleeting expressions, what it is like to feel at home in her home. To pass under the umbrella of trees that guard the long country road to the hand-built house she shares with her husband Christian in a rocky patch of Loyalist Ontario. To find a comfortable seat, and settle in.

Before we do, however, there are a few things you should know about Beresford-Kroeger. For starters, the botanist and Celtic medicine woman does not suffer any kind of fool greatly, let alone, entitled fools.

"And I’m saying that to all the people with money and who think they have huge status. I think it is a wrecking system for humanity to hold yourself above everyone else and think you are better than anybody else."

The woman prizes frugality just as one would expect from the bestselling author of The Sweetness of a Simple Life. She shops for clothes at Value Village and walks gently on the earth.

Nor does she apologize for her quiet and rural existence far from the nation’s cosmopolitan citadels.

"If you don’t like the way I live, there are two doors in my house. You can come in one door and go out the other door. If you do like me, I’ll give you friendship and I will give you laughter. Well, is there anything better than that in the world?"

You should know that she distrusts institutions and is a paying member of only one: the Irish Garden Plant Society.

She particularly dislikes the modern university.

You should know that Beresford-Kroeger’s hero is Nelson Mandela. She does not own a computer or a cell phone yet is probably one of the most connected people you will ever meet.

Like the farmer and social critic Wendell Berry, she writes with a lead pencil and can produce a basket of stubby remainders to prove it. She calls Christian, a large man with a hearty laugh, "his lordship." He calls Diana "her ladyship." They laugh a lot.

Her scientific curiosity is as broad as an ancient Irish oak. She studied botany and medical biochemistry in university. Early in her formal scientific career, she developed a non-typing artificial blood. She has also explored the impact of nuclear radiation on biological systems. At one time or another she worked as a research scientist for the University of Ottawa, the Canadian Department of Agriculture and the Ottawa Heart Institute.

She knows as much about the working of the human heart as she does the physics of a living tree.

During this time the botanist realized that most scientists were lousy communicators, and that too much was at stake in the world to tolerate such ineptness.

Someone, Beresford-Kroeger thought, had "to take the knowledge of the ivory tower down to the people who paid for it." She started writing.

First came a popular book on gardening. Then came her books on trees, which brim with revelations on the medicinal properties and cultural values of arboretums. The books have done for the world’s forests what Jane Goodall did for chimpanzees, and what Rachel Carson did for our ancient mother, the ocean.

You should know that the famed Harvard biologist E.O. Wilson has pronounced he shares a dream with this botanist.

"We want people to see the forest and the trees, and the wildlife abounding in wild environments, in fine detail. We want native species to be valued and cultivated one by one for the special place they have in the deep history of the land."

Arboretum Borealis reminded Canadians the boreal forest scrubs the air and cleans the water and is a treasure as great as the Amazon. It also said the boreal’s Indigenous people still understand the purpose of any forest better than western science.

You should also know that this book almost didn’t get published because one university press argued that Canadians didn’t care about Indigenous people and that no self-respecting scientist should ever refer to a landscape as sacred.

Beresford-Kroeger thought, "Well you’ve met one and I am one. Try to find a scientific definition of life and you won’t find one. Life is sacred." She found another publisher that wasn’t a "bloody disgrace."

The Global Forest, which predated other popular tree books, explores the complicated universe of trees and their magical abilities to communicate. In this collection of precise and poetic essays, she repeated her plea that trees be planted in rural areas to promote health, preserve biodiversity and fight climate change.

To date, her tree work has been the subject of three film documentaries including Call of the Forest. One of the central characters in Richard Power’s bestselling Overstory, the tree researcher Patricia Westerford is partly based on the discoveries of Beresford-Kroeger and UBC scientist Suzanne Simard.

You should know that Beresford-Kroeger has an encyclopedic memory as great as one of Tolkien’s Ents.

She can tell you that the Laurel tree has always served as the best defense against tsunamis in Japan because their roots travel 30 feet down into the ground. The balsam fir, which the Cree called pikowahtik, releases anti-bacterial compounds in its aerosols. The green needles of the white pine (Pinus strobus) make an excellent treatment for bereavement and sadness. It, too, serves as hospital for boreal song birds. The kingnut hickory (Carya laciniosa), her all-time favourite tree, was used by Indigenous people as a source of primary protein. They regarded it as an anti-famine tree. And on she goes.

Perhaps the last thing you should know about Beresford-Kroeger is her unusual and traumatic childhood, which is partly the subject of her latest book To Speak for the Trees. She was brought up by Gaelic speakers and taught the old ways before being introduced to western science.

Her Protestant father, John Lisle de la Poer Beresford, taught at Cambridge, and came from the best of everything and was related to the Churchills and the Spencers. Her Catholic mother, Eileen O’Donoghue, hailed from a bloodline that could be traced back to the kings of Munster.

She was orphaned as a young child. First, her father died mysteriously, and then her mother perished in a car accident. Alone in the world, Beresford-Kroeger faced automatic confinement in one of the notorious Magdalene Laundries — a brutal residential school for unwed mothers and prostitutes.

Fortunately, a bookish and inattentive uncle offered her asylum. But each summer Uncle Pat sent her off to the Valley of Lisheens where her great Aunt Nellie, a Celtic medicine woman, taught her the medicines of local plants, the wisdom of Celtic culture and the poetry of the Gaelic language.

In the Lisheen valley, the last embers of Celtic culture not smothered by the British Empire still burned hot. In this land of standing stones and simple farms, an orphan was still regarded as everyone’s child by the Gaelic speakers. Beresford-Kroeger became their last student.

She learned how to treat worts with potato skin and the medicinal value of a walk in the heather. Aunt Nellie taught her the Brehon Laws and about some of the great trees that once covered Ireland. She learned about the ancient Celtic sweat lodges called "houses of perspiration."

And when she entered university she promptly put the ancient lore about plants entrusted to her to the test of modern science. Ever since then she has sought to bridge the world of modern science with the ways of traditional wisdom. 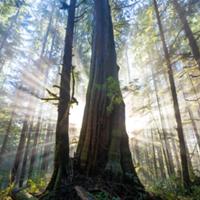 On the Hunt for BC’s Biggest Life Forms

You should know that she respects the triad of the Celtic world: body, mind and soul. "I think like that and apply it to everything around me."

And now you are ready to take a seat by the large Findlay Stove in her kitchen that the 74-year-old laughingly calls "her friend."

A cup of black tea and a small glass of Irish whiskey sit on a table because telling stories is thirsty work.

In her County Cork accent, her ladyship now begins to talk and laugh and scold about the ways of the world.

"You have to open your thinking," she begins.

Up next: Diana Beresford-Kroeger on how the climate crisis demands the replanting of forests, and communal culture. Read it here. Find the whole series so far here.