That decision made Imperial Oil, which is majority-owned by Exxon, an early supporter of an oil industry campaign of climate denial that continues to slow progress in combating the greatest existential challenge of our time.

Brendan DeMelle, executive director of the research group DeSmog, said the documents show that as early as the 1970s Imperial Oil had confirmed the link between fossil fuels and global warming. DeSmog and the Climate Investigations Center last week published thousands of pages of official Imperial Oil documents found in an archive in Calgary.

DeMelle said that with pressure building in the late 1990s for Canadian climate change solutions that might reduce fossil fuel consumption and hurt the company’s business model, “they start talking about scientific uncertainties and doubt.”

Imperial Oil declined to provide comment for this story, instead pointing The Tyee to its website, which states that “We believe that climate change risks warrant action and it’s going to take all of us — business, governments and consumers — to make meaningful progress.”

That was not what the company was arguing in the late 1990s, however, as its 1996 Annual Report makes clear.

“Imperial is active in the debate concerning what international commitments, if any, Canada might make with respect to reducing greenhouse gas emissions after 2000 by limiting or restricting fossil-fuel consumption,” the report reads. “In Imperial’s view, such actions are inappropriate given the continuing widespread uncertainty regarding the impact of human activity on potential global climate change.”

Imperial, which operates Esso-branded gas stations across the country, made similar comments the next year after Canada joined delegates from over 150 countries in signing the Kyoto Protocol, the world’s first major international treaty to address the growing climate emergency.

“Imperial has joined many other Canadian corporations and business groups in expressing grave concern over the federal government’s commitment, made at the Kyoto conference on climate change last December, to reduce Canadian emissions of greenhouse gases,” wrote then Imperial chairman R.B. Peterson in a 1998 letter to shareholders.

“The Government of Canada appears to be on a course to mandate a substantial reduction in the use of oil and other hydrocarbon fuels, based on the unproven hypothesis that consumption of these fuels will cause global climate change,” continued Peterson, who is now honoured in the Canadian Petroleum Hall of Fame.

Though shareholders and the Canadian public likely didn’t know it at the time, Imperial’s own researchers had acknowledged internally that climate change was indeed happening, posed potentially serious global risks and was made worse by the burning of fossil fuels. They also identified a shift towards renewable energy and an economy-wide price on carbon emissions as potential solutions.

As early as the 1970s, for instance, Imperial Oil had included carbon dioxide on a list of global air pollutants, the same decade that its parent company Exxon was conducting research into the causes and impacts of climate change.

In 1980, Imperial produced a report stating, “it is assumed that the major contributors of CO2 are the burning of fossil fuels.... There is no doubt that increases in fossil fuel usage and decreases of forest cover are aggravating the potential problem of increased CO2 in the atmosphere.”

A decade later, Imperial noted in “A Discussion Paper on Global Warming” that “the scientific basis for the so-called greenhouse effect was well established decades ago.” Despite observing that “many scientific contradictions and uncertainties remain,” the Canadian oil company warned, “the possibility of global warming is a complex and potentially serious issue for the world community.”

By then, the company had learned that alternatives to fossil fuels were feasible. A report Imperial commissioned in 1975, for example, concluded that “theoretically, up to 75 per cent of the energy for [household and commercial] uses could be provided by solar energy. We estimate the potential market for solar climate control at over $1 billion by 1985.”

And in 1993, the company learned from a separate study that a Canadian “carbon tax building up to $200/tonne of carbon by 2005 could stabilize CO2 emissions.” Such a policy, the study noted, could potentially reduce Imperial’s “downstream revenue” by 12 per cent.

Despite the company’s knowledge about climate change and its potential solutions, which was well-ahead of the Canadian public’s, Imperial Oil had decided by the late 1990s to join Exxon and other large oil companies in denying that a looming emergency even existed.

“Carbon dioxide is not a pollutant but an essential ingredient of life on this planet,” then Imperial chairman Peterson wrote in 1998, contradicting the company’s own assessment of CO2 from 1970, which had labelled it an “air pollutant.” 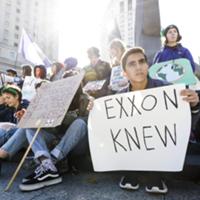 For Exxon and the Oilsands, Trial May Kickstart a Great Reckoning

“One thing is clear in this debate. There is absolutely no agreement among climatologists on whether or not the planet is getting warmer or, if it is, on whether the warming is the result of man-made factors or natural variations in the climate,” Peterson wrote. “At this stage I feel very safe in saying that the view that burning fossil fuels will result in global climate change remains an unproved hypothesis.”

Several years later, Imperial Oil was bragging to investors about the hundreds of millions of dollars it was investing in the oilsands, one of the planet’s highest carbon oil sources.

And though Imperial Oil now accepts the global scientific consensus on climate change — it warns in official documents of “serious impacts to humanity and to ecosystems” — the company continues to make large investments in climate-destroying projects, including most recently a $450-million expansion of its Cold Lake thermal oil project.

The Climate Investigations Center says the evidence from the hundreds of newly revealed Imperial documents is clear.

“These documents show yet again that the fossil fuel industry had more than enough information to act on climate change many decades ago, but repeatedly prioritized their profits over the future of the planet,” it argues.