NDP leader John Horgan had been talking to a town hall style meeting at a Victoria hotel for almost an hour Thursday, when an older man in a suit jacket got the turn he’d been waiting for.

“We had 914 human beings die last year from drug overdose,” Derek Peach said. “My child was one of them.”

An NDP supporter whose daughter died two months ago at the age of 50, Peach wanted to know what his party would do about the ongoing overdose crisis. “Tell me you’ve got something better than just another phone number or website for people to phone. What have we got in our platform?”

Horgan responded, “I’m terribly sorry for your loss. You and 900 other families are suffering because of a lack of action to address a health care crisis, an addictions crisis in British Columbia.”

Horgan said he often thinks about the growing number of people dying from drug overdoses. “We need to work together on this,” he said. “On addictions, if you present wanting help, you have to have someone there to make sure the hand pulls people in for help. That means treatment beds. It’s in our platform.”

Horgan also said an NDP government would create a ministry of mental health and addictions so one person in cabinet could focus on the crisis and be accountable for the government’s response. “I’ll do my level best to make sure those numbers never ever get as high as they were last year,” he said.

For Horgan it was the end of a day that started with a scrappy debate with Liberal leader Christy Clark and Green Party leader Andrew Weaver. His day also included a stop in Sidney for an announcement on ferry fare reductions with Saanich North and the Islands incumbent Gary Holman.

Horgan spoke for almost an hour, answering questions from the crowd on housing affordability, education, old growth logging, support for small businesses, care for seniors, trophy hunting, BC Ferries and other topics. It was wide ranging and loose, in a style similar to appearances the late Jack Layton made in his breakthrough 2011 federal election.

“What rocked me was to have a parent of somebody who had died,” Horgan said afterward. “That goes right to your core. I’m so glad he had the opportunity to speak and I’m so glad I was able to give him some hope that there will be a legacy for his child.”

Horgan said he’d never before met the man, who he hugged as the event closed.

Peach told The Tyee he was encouraged by Horgan’s response, though the problem is complex and requires a broad approach. “His commitment to have a single ministry with one individual responsible is a big shift. That’s a start.”

He said he’d been reading the party’s platform. “I believe in a political platform you can’t spell out all of the things,” he said. “I was still looking for more specifics. The whole issue for me is so multifaceted, the educational component, the medical component, the justice system.”

In general, he said, he was looking for “a shift from criminality to considering addiction a health issue,” and found that in the NDP platform. “That one aspect of this platform is significant. I think it’s a game changer, once we get it out of that punitive aspect, I’m hopeful of that.” 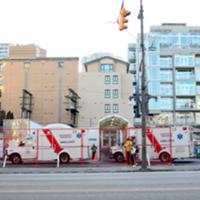 Decisions about how to deal with the crisis need to be based on evidence, Peach said. “I don’t see the current government awake enough to the evidence,” he said. “I’m disappointed in the government we’ve had in power for so long and I’m not convinced their voiced concern is followed by real action based on what they see. I’m hopeful this government that I’m supporting will make that shift.”

In grappling with the crisis over the last year, the provincial government has declared a public health emergency and has expanded services including overdose prevention sites, supervised consumption services and the provision of naloxone, which reverses the effects of overdoses. It has also funded a joint task force on overdose response with the federal government.

Horgan acknowledged the Victoria crowd was friendly, but said he enjoyed the opportunity to connect with people. “To have that father at the end like that, second to the end, really put an exclamation mark for me on why I’m doing this,” he said. “It’s people like that who want to hope for better and they’re not getting it right now.”

People need to understand the province can improve for everyone, he said. “Christy Clark would like us all to believe we’re doing the best we can and we have to wait for a golden time some time in the future. Our time is now.”