A lifelong Winnipegger, 33-year old Oanh Pham feels she's always walking a "tight line" when it comes to housing, even in a city renowned for its relatively affordable market compared to the rest of the country. 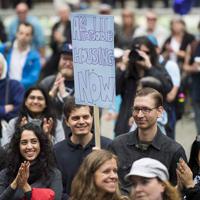 Yet despite her University of Manitoba degree in psychology and business -- and years of experience managing volunteers for non-profits overseas and locally -- in some months the mother of one earns just $10 too much to qualify for income assistance, but still too little to pay all her bills.

"I'm just not really sure what the barriers even are sometimes," she said. "I'm in a tight spot because I'm over-qualified for many jobs but I'm under-qualified for others." For Pham, it's meant a years-long struggle to find housing that is at once affordable, appropriate and feels safe enough to raise her 16-month old daughter Hannah.

Since returning from Nigeria in 2013, where she worked as an organizational advisor for the development organization Cuso International, she has at times had to crash with family members, stayed in a residence for young pregnant women in need, and been housed in a government-subsidized apartment building beset by noise, gang activity and violence. After one too many late-night scares, Pham placed a machete near her door for protection.

"I know how hard it is to get housing," she said. "I know what it 's like to apply to all these housing places and not to qualify."

Pham is far from unique. For many young, educated Canadian families like hers, finding appropriate and affordable housing is a rising barrier to living in cities near where they work. Across the country, urban-core housing costs are outpacing salaries for both renters like Pham, and would-be millennial homeowners alike.

At the most unaffordable end of the spectrum: Vancouver. A report release recently by Vancity Credit Union warned that young families could soon be priced out of the Metro Vancouver housing market altogether. By 2025, only senior business, construction and engineering managers will be able to maintain affordable housing in the region, the credit union predicted.

Right now, a household needs to earn $123,000 a year to pay the average mortgage. Within a decade, they'll need nearly $200,000: home costs are rising by nearly five per cent a year. Wages however are only going up between 0.6 to three per cent a year -- leaving a growing gap between what's available, and affordable.

While extreme in Vancouver, the same pattern is emerging in other Canadian cities. Last summer, for example, Edmonton hit an all-time record for home prices.

Jason Spoor, a 33-year old Certified Management Accountant in the Alberta capital, and his wife -- a registered nurse of 37 -- had hoped to find a home close to transit which they take to work. They also longed for a little more space indoors to entertain friends, many of whom are having kids. But despite the couple's education and steady careers, they struggled to raise a down payment.

"That was probably the biggest barrier," he said. "It's fairly easy to come up with five per cent as a young professional, but to do it responsibly -- at 20 per cent [of the purchase price], where the risk is less for you in the case of a downturn -- that was a bit of a challenge."

Eventually, he and his wife found a house through the Home Program, an innovative Alberta realtor-backed program that helps first-time, "moderate income" homeowners cover some of the costs of closing on their first purchase, and prepares them to own with information about managing finances, paying a mortgage and home maintenance.

"The education component was really important," Spoor said. "Even though I'm an accountant, I still learned a few things."

At its start about fifteen years ago, Home was aimed at lower-income families. But according to program coordinator Brian Finley, it's since "broadened its scope" to address a much bigger slice of the market. Now any aspiring buyer earning up to $60,000 can participate and qualify for downpayment assistance. So far, he said, the program has placed 1,200 families in homes through a mix of assistance: a revolving fund to subsidize down payments, underwriting mortgages, and assisting people to reduce their credit problems. Some 5,000 people have taken its home ownership-prep course.

Finley says his program reduces the pressure on rental stocks two ways. It takes many young families out of the rental market entirely. And, in contrast to much government rental housing assistance, it keeps people who do graduate to home ownership from falling back.

"The problem with rent subsidies," he argues, "is that when you finally make enough money that you don't need that subsidy anymore, you are forced out into the market. But people were failing in the market and ending up back on rent subsidies."

The challenges facing young families in the millennial generation may seem less urgent than those of other groups facing homelessness or substandard, insecure shelter. But the line separating middle- and moderate-income young families from poverty is no longer as clear as it once was.

University of British Columbia population and public health professor Paul Kershaw doesn't think that's the case. Through his organization, Generation Squeeze, he's advocates for millennials he believes have been shortchanged.

"The cost of housing represents a generational tipping point," Kershaw said. Across the country, "housing affordability for this generation of young adults in their childbearing years, is a problem.

"There's been a fundamental deterioration in the standard of living for people. Even though younger people have more post-secondary education than generations before, [they face] a combination of rising housing prices and decreasing earnings for full-time work."

After adjusting for inflation, millennials age 25 to 34 earn on average $4,000 less every year than the same age group did four decades ago, while national housing prices doubled in that time. In 1976, it took the average Canadian five years to save a 20 per cent downpayment on the average home. Today, it takes 10.

"You see many younger people adapting, individually or at the household level, as best they can," he observed. Many are "making really substantial adaptations that deserve more praise than people give them credit for."

Kershaw cites everything from scaling back expectations to accepting they will be permanent renters; raising families without yard space, or postponing having children by a decade.

But with a federal election looming, he identified a deeper problem. Young adults, he said, have largely "given up" on the idea that they can force government to address their housing issues.

"We've given up on the idea of building and adapting public policy to solve problems for entire generations that individually we can't fix alone," Kershaw laments. Yet he thinks there is much governments could do to address the squeeze millennials face.

"We can use politics to mitigate housing trends," Kershaw suggested, for instance by increasing property taxes on high-value homes and extending tax breaks now given to seniors to younger homeowners. "Or more likely, find other ways to save [millennials] money -- for instance getting the cost of child care down," or reducing student debt burdens.

Last fall, Pham's quest for suitable housing was finally rewarded. She interviewed for a two-bedroom suite in a newly opened project known as West End Commons, a redevelopment of a historic inner-city church. Though her rent remained what she had previously paid for a larger two-bedroom apartment in subsidized housing, she no longer has to keep a weapon by her door for fear of intruders, or answer the door to police in the middle of the night.

She's also found a new community. Tenants in the fledgling complex are banding together to address shared problems.

For Pham, a major barrier has been the high cost of care for her daughter while her husband remains in Nigeria studying hotel management. A young couple with full-time office jobs living upstairs in one of the building's unsubsidized market rentals, also struggle to pay for daycare. The three have started to swap child care from time to time. "We're all in the same boat," Pham said. "We all try to help each other because we know how hard it is."

With their housing needs met, other residents are exploring the idea of launching a child care service in the complex.

But the best change, Pham said, is how her daughter reacts to a knock on the door. No longer does she have to fear people running down hallways with knives, or police looking for armed suspects in the middle of the night. "Hannah would jump every time someone would knock on the door before, because I'd get tense and she'd feel it."

Instead, they now live in a spacious unit with large, bright windows adjacent to an indoor playground and atrium. "Here the neighbours have gotten to know each other. Now kids are coming knocking on the door, wanting her to play with them. She loves it so much -- she gets excited and just runs to the door.

"It's exciting to see her develop that trust in people, the sense that, 'These are my friends.'"