Shawnee ran away from home twice in two years before leaving for good at 16. The teenager was feeling increasing hostility at home after coming out as bisexual. 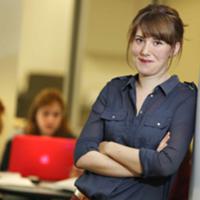 "I wasn't allowed on the phone, on the computer. Couldn't go to school early. Had to come home for lunch break [and] right after school," recalled the now-21-year-old Shawnee, who asked that we withhold their last name to protect their privacy. Every moment except for a 15-minute daily shower was monitored -- even dressing and undressing happened with the bedroom door open.

At an age when teens seek more privacy and independence, Shawnee's home became a prison. "I didn't understand it was because she was scared of what would happen to me," said Shawnee, whose mother apparently feared her child's sexuality would lead to self-harming.

Respecting gender identities extends beyond shelters dealing with marginalized youth. So in this article we're using Shawnee's pronoun of choice: they. Biologically Shawnee is female, but prefers "they" instead of "she" or "he" because they don't identify with either the male or female gender. At the same time Shawnee does identify as a lesbian because their biological sex and the sex of people they're attracted to is female.

Predictably, Shawnee rebelled, sneaking out to friends' houses and sleeping on couches for up to a week at a time. One morning Shawnee awoke to find a note from their mom on the bed: "[It] said if I decide to stay I'm going to have to keep dealing with whatever's going on at home. If not I had to leave by a certain time so my little sister didn't see me. So I left."

Shawnee and a girlfriend, also fleeing an unstable family life, spent the next two years bouncing from couches to floors to rented rooms, staying with people twice their age who, Shawnee alleges, dealt drugs, drank too much and abused the underage couple.

Forty thousand young Canadians are believed to be homeless for at least part of every year -- a number that doesn't include those like Shawnee who crash on couches or stay in temporary housing.

WHAT'S IN AN ACRONYM?

Activists, government and academics used to refer to the gay, lesbian, bisexual and transgender community as GLBT. Times have changed.

In the belief that human sexuality is a spectrum, and because many of our sources use the acronym, we've adopted LGBTQ2S. That stands for:

Lesbian: a woman attracted only to other women.

Gay: a man attracted only to other men.

Bisexual: a person attracted to both men and women.

Transgender: biological sex doesn't match gender expression -- whether an individual identifies masculine, feminine, both, or neither.

Transsexual: a person born as one biological sex who is transitioning or has transitioned to another.

Queer: a catchall term for a sexuality other than heterosexual or someone who doesn't feel their sexuality fits into the narrow boxes of other labels.

Questioning: unsure of their sexuality.

Two-Spirited: North American indigenous term for a person with both a male and a female spirit.

Don't get too attached to this acronym. It doesn't cover pansexual, allies, asexual, and others we might not be aware of. It's likely to evolve along with acceptance of the multitude of human sexualities.

There's less data on how many identify as lesbian, gay, bisexual, trans, queer, questioning, or two-spirited (LGBTQ2S). But research now decades old found that 20 to 40 per cent of homeless Canadian youth were LGBTQ2S, even though only five per cent of the population identify so.

That estimate may be low. "Many young people won't come out to the random volunteer conducting the [homelessness] count," says Alex Abramovich, who recently finished a PhD at the University of Toronto on LGBTQ2S youth in the city's shelter system. Many, he says, don't feel "safe answering those types of questions."

Still, to help fill the data gap Abramovich successfully pushed the City of Toronto to include a sexuality question in its 2013 street homeless count. Twenty-one per cent of homeless youth surveyed that year identified as LGBTQ2S.

Fear keeps some LGBTQ2S youth out of shelters entirely -- and at greater risk on the street. In many provinces, if youth under 16 try to sleep at shelters, staff are obligated to contact children's services, who in turn must contact parents.

It's not hard, adds Trish Garner, community organizer for the BC Poverty Reduction Coalition, for a parent to convince an overworked social worker that their LGBTQ2S teenager is welcome to come home, only for tensions to return when the kid does.

"If your whole sexual identity or gender identity is not recognized, acknowledged, or even worse, families try to turn you straight, then that is not a livable situation for people," she said.

Shawnee's girlfriend was 14 when they left home, so the pair avoided shelters to slip under provincial authorities' radar.

Even once past the risk of being turned over to parents hostile to their identity, youth 16 and older find homophobia and trans-phobia deeply embedded in shelter culture, says Abramovich.

Intake formalities, for example, don't accommodate people who fall outside the male/female binary. Neither do space assignments, which in most Canadian youth shelters are co-ed with sexes separated by floor or area.

That's why it made national headlines earlier this spring when the City of Toronto included funding for 54 specifically LGBTQ2s or allied youth shelter beds in the city's budget. The first 25 beds will become available this summer in the YMCA's Sprott House, which already operates as a youth shelter.

The decision overturned a long-standing view in social-work circles. "There's always been this perception that if we segregate a certain population they will be further marginalized," said Abramovich, who spent years lobbying city council for LGBTQ2S youth shelters.

"Youth have asked for this service for [over 20] years. So if a population of people who are living it every single day are saying that they need something, then I think that we need to listen to them."

He calls Toronto's action a big deal. "If the city of Toronto is funding a program like this, that speaks very loudly. I think that's how we change the culture of the shelter system." Abramovich says he's working now with the Alberta government to improve service to LGBTQ2S homeless youth.

Isolating on the street

Toronto's shift challenges another bit of conventional social-work wisdom: that the first goal in solving youth homelessness is family reunification. As was Shawnee's experience, that's often not a solution for LGBTQ2S youth.

"So many people that I've talked to, their lives have been threatened by their parents," said Abramovich. "There's no way we're going to be able to work on that relationship."

If friendly family can't be found, supported independent living is the next best thing. Broadway Youth Resource Centre in Vancouver has 30 beds for up to two years of transitional youth housing. Ten are reserved for LGBTQ2S youth, 10 for kids exiting the foster system, and 10 for Aboriginal youth.

A new project in the city is offering a more permanent solution. In February, RainCity Housing opened Canada's first program for long-term LGBTQ2S youth housing in Vancouver. Leveraging a provincial rental subsidy for youth in need, the program currently houses nine youth ages 18-24: four in a house with resident staff and five in their own apartments. 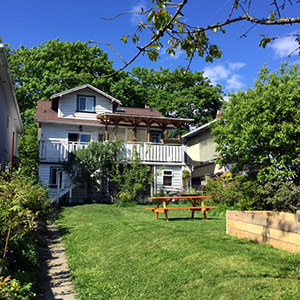 Project team lead, Aaron Munro, says weekly house meals that all youth attend help build the supportive community that LGBTQ2S youth need but too often don't get at home or on the street.

"When we're young, figuring out identity and who are safe people around us is difficult," he says. "And when you have added stuff around that, your gender identity or sexual identity, it becomes that much more difficult."

The program's focus on building strong connections to peers and the region's LGBTQ2S community aims to ensure that youth are safer together than they would be alone.

"Homelessness is isolation," said Munro. "If we have people around us we don't end up homeless."

But such responses tend to be limited to urban centres. BC Poverty Reduction Coalition organizer Garner wishes for a province-wide poverty reduction plan (B.C. is the only province without one) that accounts for the unique vulnerabilities of LGBTQ2S people, particularly when those may be exacerbated by ethnicity or a disability.

Not every municipality has the resources for LGBTQ2S housing or shelters. With that in mind, Canada's National Learning Community on Youth Homelessness has launched a national LGBTQ2S online toolkit for service providers.

It's based on feedback from focus groups held last year in three Ontario cities and St. John's, Newfoundland. Despite the small sample and wide geography, the groups produced several common recommendations. They included: educating staff in LGBTQ2S issues so youth clients don't have to; using youths' chosen names and pronouns; enforcing harassment and bullying policies; and making washrooms gender-neutral.

Provincial help eventually got Shawnee back on their feet. After two unsuccessful attempts to get youth support from the B.C. Ministry of Children and Family Development, a persistent social worker convinced Shawnee to try again. The third try worked, providing a room in a semi-independent youth home, money to cover essentials like food and clothing, and access to healthcare.

Unlike the majority of homeless youth, Shawnee graduated from high school. Graduating from the youth agreement at 19, however, meant leaving the youth home and going directly on welfare. Luckily, Shawnee secured one of six rent subsidies available for youth from Options Youth Services in Surrey. Originally committed for six months, it was extended to a year and a half.

Today Shawnee identifies as a lesbian and lives in Richmond with a new girlfriend, a part-time job, and plans to get a Child and Youth Care diploma from Douglas College. They've even been visiting their mother again. "We started building a better relationship over the last couple of years," the former runaway said.

But not every LGBTQ2S street youth is so lucky. By most estimates, at least 8,000 Shawnees will struggle this year to find a home where they can simply be themselves.