Seems like every generation since the Second World War has had a reason to flock to the suburbs. 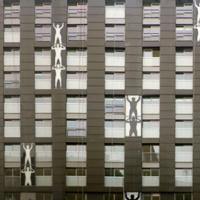 Cheap Condo Experiment Fails to Live up to Hype

For some of our grandparents, it was racism, escaping from lower-income ethnic enclaves.

For our parents, it was a yard for us kids to play in and a respite from the supposedly crime-ridden cities.

For my generation? Housing prices, thanks to a skyrocketing real estate market and boomers that never seem to tire of telling us we have no choice but to go east, young wo/man.

Take a recent column from the Vancouver Sun's Shelley Fralic, deriding late May's #DontHave1Million housing rally for drawing only a few "coddled" and "indulged" millennials who think the world "owes" them a decent living and a place to stay.

High cost housing in Vancouver "was ever thus," she said.

Maybe. But it's never been "thus" bad.

'Burbs are no bargain either

Personally I'm okay with never owning a single, detached dwelling in Vancouver. I'm tickled that I live in a walkable, bikeable neighbourhood just a 20-minute ride from work, and for it I've resigned myself to renting, possibly for life. Then again, I don't yet have kids or elderly parents to care for.

What I'm not okay with is being unable to afford anything in Vancouver, rentals included, that isn't falling apart, too small, or subterranean.

Fralic sucked it up and bought a place in the 'burbs in the 1980s -- so why, she asked, does my generation feel so "entitled" to a home in the city?

But Fralic is wrong about the suburbs. For one thing, the housing economy of the 1980s when she bought in -- I was an infant and without the investment capital to join her -- was tied to the region's incomes, says Bing Thom Architects urban planner Andy Yan.

"It's interesting how much housing prices [in Vancouver] dwarf how much people can make in the city," he said. "Housing is not income-based. It's been decoupled from income for a while now."

Today housing costs are so high even the one per cent can't afford most of the houses sold in Vancouver.

Add to that the fact that transit costs combined with housing make almost every suburb, including Fralic's beloved New Westminster, more expensive to live in than Vancouver proper.

So unless Surrey becomes the economic capital of the region, uprooting to the suburbs means losing out on more than Vancouver's vibrant nightlife.

"Others seek to frame unaffordability as inevitable, since Vancouver is a city of limited land supply. But plenty of other cities are in the same boat: New York and Singapore spring to mind. Both are expensive cities, but Vancouver has left them in the dust in terms of unaffordability. If Vancouver (price/income ratio 10.6) could achieve the affordability of New York (6.1), or Singapore (5.0) I’m betting that Eveline Xia would be dancing down Main Street.

“Surely Vancouver has always been unaffordable? A quick check of the stats will show that as recently at 10 years ago, Vancouver’s price/income ratio was in dancing territory, at 5.3.”

Canada-wide median incomes increased just 5.5 per cent between 1976 and 2009. Meanwhile, Vancouver has the lowest median incomes for people with non-trades post-secondary educations in the country. And that includes masters and PhDs.

But we have the most unaffordable housing prices in North America -- not just Canada, the entire continent. Vancouver housing costs skyrocketed 173 per cent between 2005 and 2015.

This doesn't just impact entitled millennials like me. The middle and low-income workers that keep Vancouver running -- hotel maids, bus drivers, teachers and cops -- can't afford to live here, either.

Diana spends 20 per cent of her income on transportation. That's 11 percentage points more than she would spend if she lived closer to work in what the U.S. Department of Transportation dubs a "location efficient environment": one where walking, biking, or public transit to work costs no more than nine per cent of your household income.

Yes to the tax

Fralic is right when she says Vancouver has always been expensive. Turn of the 20th century European and American land speculators were blamed when land costs went from $400/lot in 1886 to $4,250/lot by 1900.

Some are calling for a municipal tax on foreign investment in residential real estate and on housing flippers. Fralic labels the idea racist if it only applies to off-shore residents, a.k.a. Asian buyers. I agree, so let's open it to all non-resident investors, domestic flippers, and perhaps even to those like Fralic, a proud buyer and seller of rental properties.

While Asian money may be overheating our housing market, ideas from the same continent suggest we could back off a little on the fear of infringing on "free enterprise." Fralic wants to know how a city controls housing costs in a global market without fettering enterprise. Yan points to Singapore and Hong Kong.

"They're in free markets and global economies and they seem perfectly happy to intervene in the housing market," he said. "Anywhere between 70 to 80 per cent of their populations live in a form of government social housing."

And what Fralic's fear of racism fails to highlight is the impact that housing costs "delinked" from incomes has on some of the region's poorest residents: recent immigrants, the majority of whom are originally from East Asian countries.

Using 2006 data, a University of Toronto study found neighbourhoods with the most recent immigrants in the Lower Mainland were also neighbourhoods where incomes had fallen 15 per cent or more since 1976.

A lot of those neighbourhoods are in the suburbs.