[Editor's note: With voting day just over two weeks away, we begin to look back on big issues that have driven debate in our province during the last 12 years of BC Liberal governance. What did B.C.'s leaders and opposition parties say and do on these major files? What are they saying now? What are the facts? Humbly offered here, a cure for political amnesia among candidates and media alike. Today, the first in our series: IPPs.]

It all started on the Ashlu River. 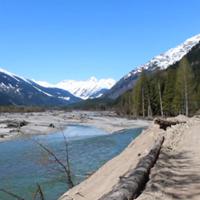 A southern tributary of the Squamish River, and a whitewater paddlers' dream, the Ashlu was the site of one of the first run-of-river projects in the province and the jumping-off point of what would become one of the most controversial issues of the BC Liberal reign during the last decade.

In 2002, newly-elected premier Gordon Campbell announced the first call for power under a revamped energy strategy.

BC Hydro would no longer build its own energy-generating capacity, but buy the power from independent power producers, or IPPs. Although run-of-river (sometimes called micro-hydro) was still unfamiliar to most British Columbians, it quickly emerged as a leading technology.

On the surface, it seemed like the projects held promise for the economy and environment. Compared to a dam, they would leave a tiny footprint. Compared to a coal plant, they had zero carbon emissions. Of 16 contracts awarded in BC Hydro's first call for power, 14 were run-of-river projects.

Ledcor's $80-million Ashlu River project was one of them. Proponents extolled the 230 gigawatt hours of clean electricity -- enough to power 23,000 homes -- the project would produce.

Around 2004, when local kayakers and conservation groups caught wind of what exactly the project would entail -- the diversion of water from a seven-kilometre stretch of river -- they cried foul on the project's "green" label.

Even the Squamish Regional District was opposed. But with the Liberals' passing of the 2003 Significant Project Streamlining Act, it had little regulatory ground to stand on.

And it soon became apparent that the Ashlu was just a drop in the bucket.

By 2006 there were almost 500 applications for run-of-river water licenses (the first step in developing a project) across the province, including seven in the Ashlu drainage alone.

Concern shifted from individual rivers to the cumulative impacts of these projects -- not just on the rivers themselves, but on the surrounding wilderness. Run-of-river projects came with road construction and transmission line construction in parts of the province that had been previously untouched.

By 2008, around the same time BC Hydro issued the results of its second call for power (which awarded 29 of the 38 contracts to run-of-river firms, 10 of which made contributions to the Liberals totaling nearly $385,000), environmental concerns about IPP were beginning to take a back seat to broader concerns about privatization.

The Wilderness Committee aligned with organizations like Citizens for Public Power, the Council of Canadians, and the Canadian Office and Professional Employees Union, and started to reframe the issue as one of public rights and social justice.

Together these groups called for a moratorium on IPP development in the province, a move that -- in conjunction with the NDP's opposition to a carbon tax -- alienated many in the environmental movement.

Including Andrew Weaver, a prominent climate scientist at the University of Victoria who's considered a strong contender for the riding of Oak Bay-Gordon Head this election. An op-ed by Weaver in the Vancouver Sun chastised environmental groups that "have chosen to abandon abandon science and campaign against clean energy and climate policies."

Tzeporah Berman, a tree-hugger turned smokestack plugger, emailed then-leader of the BC NDP Carole James to tell her that her party's climate policies have "more in common with George Bush's Republican playbook than with those of us who supported you in 2005."

Nonetheless, just weeks before the election James reaffirmed her party's position (from a helicopter over the Ashlu River project) that it would impose a moratorium on independent power development.

Ultimately, this position would cost her.

Just weeks before the election (and the day after her flight over the Ashlu), a contingent of environmental groups known as Conservation Voters of B.C. that included a slate of candidates issued an "Anyone But Carole" endorsement for her Victoria-Beacon Hill riding, declaring that "the decision to position the NDP campaign against world-leading climate policies while not putting forward improvements or better alternatives is on her shoulders."

In the end, Gordon Campbell's Liberals won the election by slightly more than 60,000 votes.

The results had a direct impact on the IPP industry (Plutonic saw its shares jump 20.7 per cent).

While run-of-river and in fact all IPP development has slowed (there hasn't been a call for power in five years, and reportedly isn't another one on the horizon), projects from the last 2008 call are still underway -- and still very much on the public's radar.

Right now, a coalition of conservation groups is asking a judge to force an environmental review of the Holmes River project in northern British Columbia, which will consist of 10 generation sites along a 40-kilometre stretch of river, each of which is being considered separately, and therefore exempt, from the BC Environmental Assessment Act.

And earlier this year, the Wilderness Committee, one of the earliest critics of run-of-river development, issued a damning report on non-compliance on various IPP projects. Among them: the Ashlu.