Nearly all of the independent power producers (IPPs) selected recently by BC Hydro for long-term Energy Purchase Agreements (EPAs) have made sizeable financial donations to Gordon Campbell's BC Liberal party. 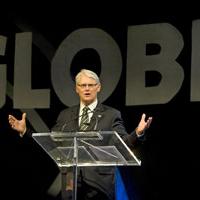 An analysis of Elections BC records by The Tyee reveals that 10 of the 14 lucky companies -- or their corporate parents or subsidiaries, or officers, directors or significant shareholders -- given EPAs on March 11 and 31 have made at least 165 gifts of cash to the BC Liberals since 2005.

Kwagis Power Limited Partnership is one of the fortunate companies BC Hydro chose for a 40-year EPA. The company intends to build a 45-megawatt, run-of-river hydroelectric facility on Vancouver Island's Kokish River.

Brookfield Renewable Power Inc., headquartered in Toronto, is one of the Kwagis partners, and the 'Namgis First Nation of Alert Bay is the other.

In 2006, Brookfield Asset Management gave the BC Liberals just $1,400, but the following year bumped that up to two $25,000 contributions.

Cloudworks Energy Inc. is not quite in the same league as Brookfield Asset Management when it comes to financial strength, but the Vancouver-based company nonetheless has done its part to assist Campbell's Liberals stay in office.

And in early 2009, in anticipation of the May general election, the company made two separate donations to the governing party: the first was for $5,000, and the second for $10,000.

Sea Breeze Energy Inc., a subsidiary of Vancouver-based Sea Breeze Power Corp., was selected for a 20-year BC Hydro EPA. The company intends to build a wind-farm at Vancouver Island's Knob Hill, near Port Hardy.

Run of River Power Inc. of Vancouver owns and operates a run-of-river hydroelectric operation at Brandywine Creek, outside Whistler. The facility was built earlier this decade by Ledcor Power Inc.

On March 31, Run of River won another BC Hydro EPA, this one for a 25-megawatt run-of-river hydroelectric facility on the Mamquam River near Squamish.

Last year, in the period leading up to the provincial-general election, Run of River gave the Campbell Liberals three donations adding up to $1,850.

In addition to building run-of-river hydroelectric operations for others, Alberta's Ledcor Power Inc. also participates in their own projects.

One such endeavour is Creek Power Inc., in which Ledcor has partnered with Quebec's Innergex Power Income Fund. On March 11, BC Hydro gave Creek Power three EPAs for run-of-river projects in the Pemberton area.

Innergex, which already owns and operates a run-of-river project on Rutherford Creek, also outside Pemberton, has given the BC Liberals two election-year donations. The first, in 2005, was for $1,000, while the second, in 2009, was for $1,500.

Ledcor itself has been thoughtfully generous to Gordon Campbell's BC Liberal party.

On March 11, the latter entity won an EPA for a massive, 142-megawatt wind-farm outside Tumbler Ridge in northeastern B.C.

EPCOR bestowed 21 offerings on the BC Liberals over the last four years.

The paced quickened two years ago as EPCOR sent five cheques totaling $8,800 to the Campbell Liberals. And last year, leading up to the general election, the utility coughed up eight more that added up to $9,576.

EPCOR-Capital Power-CP Renewable is not alone in seeking to capitalize on wind energy in B.C.'s Peace River country.

On March 11, Vancouver-based Finavera Renewables Inc. was selected by BC Hydro to build four new wind-farms to be built outside Tumbler Ridge and Chetwynd.

The company, unable to generate any revenues since its inception four years ago (and with accumulated losses of $41 million on its balance sheet), cannot be found on lists of donors to the BC Liberal party from 2005 to the present.

But Hein Poulus, who is both chair of Finavera and a significant shareholder in the company -- as well as a prominent Vancouver lawyer with the prestigious firm of Stikeman Elliott -- has steered numerous donations to B.C.'s governing party.

In 2005, Hein Poulus Law Corporation sent $500 to Gordon Campbell's BC Liberal party, and followed that in 2008 with two donations totaling $600.

On March 25, 2009, with the election fast approaching, the Poulus law corporation gave the governing party a cheque for $1,700, and on the same date the Queens' Counsel added a personal gift of $1,100.

Stikeman Elliott also has made noteworthy donations to the Campbell Liberals. Two Stikeman partners' names appear on all of those offerings, Hein Poulus and Ross Macdonald.

In 2005, leading up to B.C.'s 38th general election, the law firm wrote three cheques for the governing party, in amounts of $2,990, $5,000 and $10,000. At the same time, Poulus and Macdonald also dispatched a gift of $500 for Wally Oppal, the BC Liberal candidate in Vancouver-Fraserview, and later the province's attorney general.

Stikeman Elliott later provided the victorious BC Liberals with another $350 following the election, and in 2008 gave Gordon Campbell's party another $3,500.

Ledcor and EPCOR are just two of four Alberta-based companies to win BC Hydro EPAs in the last month.

On March 31, AltaGas Ltd. was selected to build and operate an 11-megawatt, waste heat facility near Sparwood, while ENMAX Syntaris Bid Corp. won approval for a 15-megawatt, run-of-river project on Culliton Creek, located in the Squamish area.

Last year, on the eve of the provincial election, AltaGas sent $3,000 to the BC Liberals. It appears to be the company's only donation.

ENMAX-Syntaris, then operating under the name Max Pacific Power Inc., made a single $1,000 donation to the BC Liberals in 2007.

On March 11, Vancouver-based Plutonic, along with partner GE Energy Financial Services Company, won an EPA for a 124-megawatt run-of-river hydroelectric project on the Upper Toba River near Powell River.

Through two entities -- Plutonic Power Corp. and Plutonic Power Inc. -- the company has made at least 30 donations to the BC Liberals in the last four years.

The latter year also saw a post-election Plutonic donation to BC Liberal MLA Iain Black in his riding of Port Moody-Coquitlam. The $1,000 gift was made on June 12, two days after Black was named minister of small business, technology and economic development.

(McInness, appearing on CKNW's Bill Good Show in April 2009, stoutly denied that his company had made financial donations to the BC Liberals. Questioned later by The Tyee's Colleen Kimmett as to why Elections BC records showed otherwise, the Plutonic boss offered: "I don't consider that to be donations, that's buying a seat at a table.")

He also sent $500 to Ralph Sultan, BC Liberal MLA in West Vancouver-Capilano, for the latter's 2005 re-election campaign.

In addition, McInnes forwarded four more donations to the BC Liberals through another company, Western Keltic Mines Inc. There were two such offerings in 2006 (adding up to $2,020), plus another two in 2007 ($1,020).

And still more from Plutonic

Numerous other Plutonic directors, officers and employees similarly have made financial contributions to Gordon Campbell's BC Liberals in recent years.

Four other company directors -- Grigor Cook, Bruce Ripley, Paul Sweeney and Peter Wong -- offered $299 each on the same date: May 30, 2007. The contributions likely were for a BC Liberal fundraising event.

There were additional financial gifts sent by the company's senior management. Dave Cyr, a former BC Liberal ministerial aide, now Plutonic's director of First Nations partnerships and corporate relations, gave three donations totaling $905 in 2008. Deborah Fulcher made two contributions adding up to $800 in 2009.

At least two other ex-BC Liberal political assistants also have found post-government employment at Plutonic. Since 2005, Tom Syer has delivered a total of $4,500 to the governing party, while Bob Poore has offered $2,379.

Just four of the 14 companies to recently capture at least one of BC Hydro's Electricity Purchase Agreements appear not to have made a cash donation to the province's governing party in the period 2005 to 2009.

The remaining 10 companies -- plus their subsidiaries or affiliates, officers, directors and employees -- that recently struck gold with the acquisition of at least one long-term BC Hydro EPA, made financial contributions to the BC Liberals that add up to $384,907.