[Editor's note: This is the first article in a Tyee series about past crimes and unexpected consequences in Vancouver. Find an introduction to the series here.] 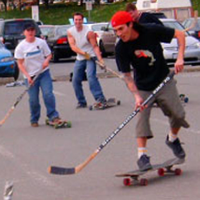 Longboarding Hockey, Made in Vancouver

Hidden from sight beneath Hastings Street, next to the Trans-Canada Highway, stretches a tunnel with a history approaching legend.

Thousands of commuters pass within a few dozen metres of this internationally known hangout every day. But few Vancouverites seem to know it exists.

Trees and bushes obscure the entrance. At one end, pooled water edges a series of steps to street level. A dirt pathway leads into a quiet alley at the other end. Beer cans, spent firecracker casings and discarded wrappers cling to the ground around the tunnel. Inside, the 49-metre tunnel sports roughly a dozen hand-built obstacles: mini-ramps, grind poles, quarter pipes.

The Leeside skate park is a fixture in Vancouver's skateboarding community.

One of the few covered skate parks in Vancouver, skaters cherish the space. If you're not someone who can identify goofy from regular or a kick-flip from front-side air, you may never have reason to visit it. But the meaning behind the creation of Leeside transcends skate lingo.

And if you look closely at the eastern wall of the tunnel, you'll find a hint of its storied past. It's a portrait, now obscured under layers of spray paint. All that remains are tufts of a young man's curly brown hair and three words that declare this space "In Memory Of..."

It's a gem nestled deep inside a grey, concrete landscape, and it owes much to a gentle, artistic skater named Lee Matasi, a young man murdered for speaking out against gunplay.

Lee Matasi, 23, a local skateboarder and artist, had been partying with three friends at Gastown's Shine nightclub on Dec. 3, 2005.

Around 3:30 a.m., the four left the club. Just as they emerged, Dennis Robert White pulled out a handgun and fired a blind shot into the cold early-morning air.

White, then 28, had been hanging around outside as the club let out. According to court documents, he was aggravated and angry; the shot was a display of bravado. As soon as he squeezed off the round, he tucked the gun into the waistband of his pants and started walking up Richards Street.

"It's not cool shooting a gun," Matasi said to White, as he and his friends came within earshot of the shooter.

White spat back: "What did you say to me? I'm the wrong person to fuck with."

White shoved Matasi in the chest and pistol-whipped him. The two wrestled briefly before the skateboarder lost his footing.

According to eyewitness testimony, White briefly stood tall above the bested Matasi, cocked the handgun sideways and fired a single bullet through his chest.

Matasi died on the spot.

White bolted from the scene and threw the gun into a trash bin. He was later arrested and sentenced to life in prison. In March, White lost an appeal of his conviction at Canada's highest court. He continues to serve his sentence in a federal penitentiary.

A Vancouver graffiti artist named Virus sprayed the portrait of Lee Matasi in Leeside tunnel just days after he died.

Reminders of Matasi, also known by his graffiti-artist moniker "Avers," now stretch from one end of the tunnel to the other in bright, bold colours.

William Fyvie is a Vancouver rapper and painter who performs under the alias Snak the Ripper. Fyvie wrote via email that he began painting at the Leeside tunnel around 1997. He described Matasi as happy, always covered in paint, and never without a skateboard under his feet.

"I remember going there to paint and seeing Lee almost every time I went," Fyvie wrote. "It was his spot."

Leeside was not always a skate park.

The provincial Ministry of Transportation originally built it to form part of a transit loop, but policy makers lost interest in the space in the early 1990s.

Matasi discovered and laid claim to the forgotten tunnel when he was a teenager attending Templeton Secondary. Matasi's friend, Matt Barton, who was living in Winnipeg at that time, recalled the story he had been told.

"Lee and his little sister... needed a place to skate when it rained, so they found that tunnel," Barton said.

Together, the siblings and their friends cleared the tunnel of garbage and filled it with wooden ramps and makeshift skate features.

"He started dragging rails there and building ramps, and then sooner or later there was a mini skate park in there," Barton said. "The spot became kind of known throughout Canada... It became known as Leeside, because Little Lee (Matasi) had put it together."

"Lee used to always brag about it. I think he got a photo of himself skating in Leeside in a Canadian skateboarding magazine."

But Leeside was never much more than an informal skate space during Matasi's lifetime. And it was by no means a permanent fixture.

Local skateboarder Thor Larson recalled that Vancouver's engineering department effectively buried the site a few years before Matasi's death: "Engineering, without consulting any of the user groups, just removed all the wooden ramps and filled it in with a ton of gravel and drove over it with one of those big cement compactors that they use on the highway."

Larson joined the group of skateboarders who used wheelbarrows, brooms and shovels to re-open Leeside in summer 2006. It was a way of remembering Matasi and honouring what he had built in his time.

Larson, who didn't know Matasi well, recalled that he and Michelle Pezel, the owner of Vancouver's Antisocial skateboard shop, had "started thinking we really need to get the community back down there and reclaim the space."

"We dug it out by hand," Larson said.

The skaters broke the hardened ground with a sledgehammer. They cleared away the rubble and unearthed the same concrete floor Matasi skated when he first found the tunnel.

"We dug out enough room for a mini-ramp, set up some tunes and had a little skate jam down there that summer. That was sort of the beginning of reclaiming the space."

The idea gained momentum and skateboarders kept coming back to the tunnel, and shovelful-by-shovelful, Matasi's vision returned to life. Larson said the crude excavation took more than two years.

"We've been really, you know, intentionally underground," Larson said. "When we bring down power tools and stuff we get shut down by the police... It's forced us to be totally ground-up, doing things really, really small and I think, to our benefit, it's made for a really unique space."

From the streets to the city

What those who rebuilt Leeside need now is assurance from the city that the skate park won't be buried again.

Thor Larson sparked up a now-defunct Facebook group that encouraged city council to recognize Leeside as an official skate park and memorial. 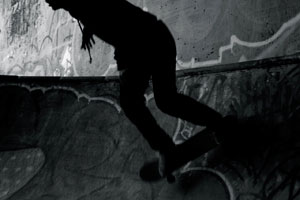 Lee Matasi and his sister dragged rails and built ramps to build their underground skate park.

Larson and Michelle Pezel have both been active in the campaign for official recognition of the park. Pezel was reluctant to speak about the project for fear that media coverage might jeopardize the tunnel's tenuous existence. She said they had worked too hard on Leeside to see it closed.

Leeside supporters have not yet seen their wish for official recognition come to fruition, but that may soon change with the efforts of a particularly well-positioned skateboarder.

Sarah Blyth is a Vancouver Park Board commissioner, one of the city's top decision-makers, who helped found the Vancouver Skateboard Coalition and who actively supports Leeside.

"I was there when Lee Matasi first cleared out the space," said Blyth.

"It's great for the park board to be able to support these kinds of initiatives where youth are involved in designing what they want for themselves," she said. "Leeside is like a reflection of the community and a reflection of a lot of love and hard work."

Blyth spoke warmly of Lee Matasi. Her testament was one of many that portrayed him as a man who had deeply touched many people around him.

"Lee really gave people a beautiful place and he had a beautiful idea and his friends have been able to build on that," said Blyth. "It's just wonderful, the legacy that he's left behind."