The Canadian Boreal Forest Agreement has resulted in a regional cease-fire in the sprawling battle among rival certifiers of "green" wood and paper products. The Sustainable Forestry Initiative (SFI), which was created by the forest products industry, and the Forest Stewardship Council (FSC), which was founded by a coalition of forest conservation activists, have been locked in a wood war for more than five years. 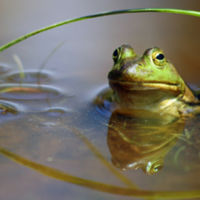 Pricing Nature to Save It

The boreal détente, which covers 72 million hectares of the coldest dirt on Earth, has spawned strange bedfellows. Two of these shared a stage last week at the Sustainable Forestry Initiative's annual conference in Vancouver.

Bruce Lourie is president of the Ivey Foundation, a Toronto-based family charity that has funded much of the activism targeted at companies such as West Fraser.

Their comments both illuminated and illustrated the fragile truce that promises to remake Canada's vast northern forest.

A tradition of 'throwing tomatoes'

Clogg appeared at ease speaking to the overwhelmingly male audience of timber industry executives and consultants. He summed up the boreal experiment succinctly in response to an audience question.

"The traditional model is: government sets up a table. Bruce comes in. He sits at one end. I sit at the other. We spend our time throwing tomatoes at each other. We walk out. We both give a different recommendation to government; they come out with something in the middle," Clogg said. "And then we both dump all over them."

A throaty chuckle gurgled across the ballroom of the Renaissance Hotel. The West Fraser executive continued.

"That's the traditional model. What we're trying to test here is: can these two sides get together, try and find that balance -- it won't be easy -- bring some outside experts in and try and give a recommendation to government that we both support."

"This is essentially a culmination of probably 10 to 20 years of a much more adversarial relationship between conservation organizations and forest companies," Lourie began.

"At the Ivey Foundation, we've been more associated with supporting what you would call the other side of the issue, supporting the conservation groups. So for many years we've supported groups like the Nature Conservancy, World Wildlife Fund, and we also support --- I should be careful what I say here --- more aggressive groups like ForestEthics."

Some audience members shifted uncomfortably in their seats. ForestEthics has lobbed some big tomatoes at SFI.

Lourie continued, "It was probably one of the most professional, the most nerve wracking, and really the most exciting gatherings of businesses and conservation groups that I've ever participated in."

The Canadian Boreal Forest Agreement is between 21 member companies of the Forest Products Association of Canada (FPAC) and nine leading environmental organizations. Together, they plan to present recommendations to federal, provincial and First Nations governments.

The agreement applies to 72 million hectares of public forest licensed to FPAC companies. That's about a quarter of Canada's 307 million hectare boreal forest.

"Just to put it in perspective, Canada's boreal forest, if it was overlayed on the U.S., it would be about 40 per cent of the size of the continental U.S.," Clogg said.

"If you look at the northern fringe of that band of boreal forest, it's pretty marginal from an economic forestry perspective," Lourie said, "but it is still very important from an ecological perspective and increasingly from a carbon storage perspective... By many accounts, the boreal forest stores more carbon than any other ecosystem in the world."

The agreement, which was announced in May, is being implemented over the next three years. It is framed around six specific goals:

(2) creation of a network of protected areas that represent the diversity of ecosystems within the boreal region;

(3) recovery of species at risk within the boreal forest, including species such as boreal caribou;

(5) improved prosperity of the Canadian forest sector and the communities that depend on it; and

(6) recognition by the marketplace (e.g., customers, investors, consumers) in ways that demonstrably benefit FPAC members and their products from the boreal forest.

Lourie, who described the sixth goal as the "pot of gold at the end of the rainbow," said, "Our hope is that [the boreal agreement] will deliver a competitive advantage as the world becomes more focused on green products and more focused on a low-carbon economy."

The path to such a future was paved by a controversial quid pro quo under which the forest companies agreed to suspend logging on nearly 30 million hectares so that caribou conservation plans can be enacted.

Those include high-profile 'do not buy' campaigns by Canopy, Greenpeace and ForestEthics.

Clogg and Lourie agreed that the first goal -- defining the forest management practices that would be certified by organizations such as the Sustainable Forestry Initiative and Forest Stewardship Council --- was the most difficult.

"It may not surprise you to hear that this was one of the more contentious areas of the discussion," Lourie said.

"This was one point we had a few tense moments over," Clogg concurred. "And it even threatened, I think, to derail the process."

Clogg described the process for the SFI audience. He said the environmental groups at the boreal table insisted on high forest management standards.

"And for them, this meant embracing FSC in the boreal... However, for the FPAC member companies, this was a major stumbling block," the West Fraser executive and SFI stalwart explained.

"We had no appetite for a major conversion to FSC," Clogg continued. "And the environmental interests felt that only FSC could give them the assurance that they sought about our performance on the ground."

"We had a discussion over a beer one night -- and this was one of the benefits of this process, is that we began to break down the traditional barriers between the two sides -- and we started to discuss the real objectives we were trying to achieve. And it turned out that our real objective was about forest management performance on the ground," Clogg said.

"So we hit upon the idea... of developing a set of on-the-ground forest practices in the boreal. The idea was to develop a boreal standard of practice which could be adopted and verified under any of the three certification systems in Canada," he continued.

They agreed to hire outside experts to help indentify best practices.

"For us this truly is a win-win. We will incorporate this element into our SFI audits of the boreal, and retain all of the other positive benefits that we like about the SFI program," he continued.

'Better than the status quo'

"Why did West Fraser support the boreal agreement?" Clogg asked. It was a front-of-mind questions for many in the industry audience.

"After all, our company has a long history with forest campaigns. This goes way back to the Great Bear Rainforest campaign on the B.C. coast," Clogg said. "So over the years, even though this hasn't been a whole lot of fun -- and I've had my share of scars -- in fact we've learned to deal with campaigns and we've learned to carry on our business successfully."

"Quite simply," Clogg replied to his own question. "We saw a window of opportunity to negotiate an outcome in the boreal that we thought was better than the status quo. Not just better for us, but better for both parties."

Both Clogg and Lourie described the boreal agreement as "in early days," and both stressed that it will need the active support of governments, First Nations and other resource sectors (such as mining and oil) in order to succeed.

Lourie noted that he had recently met with Syncrude, one of several oil sands operators now under pressure from the same sorts of conservation groups that had previously campaigned against the FPAC companies.

"We met with the CEO of Syncrude. He was really excited about the model of the Boreal Forest Agreement, and I imagine there will be more of those kinds of conversations with different industry sectors going forward," Lourie said.

The Ivey Foundation president concluded with a puckish bit of good news for the timber industry audience.

"Happily, I should tell you that all of the forest activists are now fighting the tar sands, so you guys won't have to worry about them too much longer."