Chris Cannon arrived in Vancouver six years ago wondering if he could make an enjoyable life here as a writer. What he discovered -- the power of a sharing community -- inspired him to write his Tyee reader-funded series "Share Tactics," which starts today. 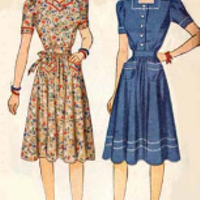 In Search of Ethical Gladrags

Compared to the "cut-throat, combative" writers' culture he had known while living in New York, Cannon found Vancouver to be very different. Within a short while he had made friends with many of the city's well-published non-fiction writers who do things together under the banner of Emily's Monkey, and he began sharing an office with some of them. The group swapped story ideas, personal connections, and critiques of each others' work. Cannon is today happy, productive and able to get by on a modest writer's income because of the support of friends who shared his values, he says.

"I definitely find a more communal spirit in Vancouver than what I experienced in the U.S.," says Cannon, who was raised in Oklahoma and served as a Sergeant in the Marine Corps before becoming a reporter for Rolling Stone and authoring several books. "In the U.S., community is often defined by people who hate the same things. In Vancouver, with its focus on public spaces and a rich history of co-op movements, the idea of sharing is more woven into the social fabric -- community is sort of a default mentality."

Cannon wanted to explore how, in a time of recession and great environmental strain on the planet, sharing communities might offer practical solutions. He applied for a Tyee Solutions Reporting Fellowship, funded by the contributions of generous Tyee readers and adjudicated by an independent panel of journalism professors. When he learned his proposal had been picked and he would receive $5,000 to carry out his project, he was ecstatic, Cannon recalls.

"It's wonderful to be able to explore positive change, rather than, say, write a travel story that would have zero positive environmental impact. I feel guilty I don't write enough positive stories. But I have to eat, and environmental stories often don't pay very well. So here was an amazing chance to write a story that looks at the rediscovery of community as a way to combat our environmental woes."

Cannon had come to such thinking after writing for another publication on the shocking environmental cost of cotton manufacturing. He was looking for a way to connect those dire facts with simple, effective changes in lifestyle that could make a difference. Thanks to Tyee readers' donations, Cannon was able to explore the worlds of second-hand clothes, group living, and shared transportation. At the heart of each inquiry was documenting the power of community to be more efficient and pleasurable than striving to hack out a middle class existence "on your own."

"This isn't some Utopian vision I'm reporting on," Cannon says. "It's not about sharing all your things and living in a commune. I'm simply noting what is going on right now in our midst that proves the worth of sharing. I only buy two or three new pieces of clothing a year, for example. I buy from thrift stores and vintage shops. The result is near zero cost to the environment, but I get clothes that are new to me, and I feel more connected to my community rather than the sterile chain of material culture.

"Or just think about the environmental savings of Craigslist," he continues. "Approximately 99 per cent of materials that run through the 'new purchase' system are in the landfill within six months. By sharing and reusing, you are saving far more than you realize. For most everyday items we buy, the materials wasted in manufacturing average 70 times the weight of the purchase. It takes 750 gallons of water to make one cotton t-shirt, and when that water is released back into environment, it’s full of toxins. That is a single, ten-dollar t-shirt."

If you're thinking Cannon is a bit too earnest, you don't know him (you can sample his wicked sense of humour in various satires he's published on the The Tyee, for example). When he's not writing articles, Cannon is penning screenplays, filming comedy sketches, and completing a full-length memoir with grants from the Banff Arts Centre and the Canadian and British Columbia Arts Councils. (See www.cannonwriter.com).

He finds social media is providing another layer of community and a different but beneficial way of sharing and keeping in touch. "Having spent most of my life traveling, my social networks are tenuous. Facebook has reconnected me in a new way with amazing people I've known a long time, but haven't been able to sit down with regularly and share ideas." Digital networks allow him to stay part of the U.S. circles he left behind, but there are some aspects of American culture he doesn't miss at all, Cannon says.

"I served in the Marine Corps -- including two years in the White House and three years as a counterterrorism specialist -- because I was very proud of what America stood for. But over the course of the George W. Bush presidency, I watched the ideals I fought for betrayed by power-mad greedniks who manufactured fear to advance their personal agendas. This is the very definition of terrorism, and a betrayal of the most foundational principles of community envisioned by the country's founding fathers. During Bush's entire second term, I felt alienated to the point of nausea from the country I once considered my community."

Yet it's plenty easy to find right here the tensions between the communal impulse and the desire to wall oneself off, Cannon learned while reporting his series. While reporting the housing piece, for example, he visited a group house on the west side of Vancouver. "Here was a beautiful place to live, near as I could tell. There was wonderful food in the garden, great trees. And right there on the edge of the property line started up manicured hedges, perfect and pointless green lawns, neighbours complaining that the more 'wild' landscape of the group house was bringing down the property values of their concrete and glass monstrosities. Here they had moved next door to a community house that had been that way for 30 years, and they were complaining about their neighbours. 'They eat food growing in their lawn, heaven forbid! That's dirty, it comes from the ground!'"

Such sentiments ring increasingly foolish in tight economic times such as these, with resources dwindling globally, notes Cannon. Make way for a new culture of sharing and all the benefits it can bring.

Chris Cannon is the latest to complete a Tyee Fellowship for Investigative or Solutions-oriented Journalism, funded by you, our readers. The $5,000 fellowships have supported other in-depth series with real impact, including the prescient and much cited series "Rough Weather Ahead: How Global Warming Will Hit BC," written by Chris Wood; "Reconciling with First Nations: How the 'New Relationship' is faring in the Fraser Valley" by Sandra Shields; "No Fares: The Case for Giving People a Free Ride on Public Transit" by David Olsen; "Teaching that Inspires" by Nick Smith and "Toxics: Your Right to Know" by Amanda Euringer; and "Good to Grow: Raising Food in BC's Cities," David Tracy's series on why the time is ripe for an urban farming revolution in B.C.

More reader-funded investigative and solution-focused journalism is slated to appear in the near future, and journalists will be invited to submit new proposals in the months ahead. If you are interested in making a tax-deductible donation to The Tyee's Fellowship Funds, please read this.