Nik Krushnisky paces back and forth in front of Science World, offering passersby a broad, genuine smile like a man who believes in what he's selling. His tiny route keeps him within steps of his product: a space-age bicycle rack with sleek, factory-fresh bikes and a solar-powered kiosk. 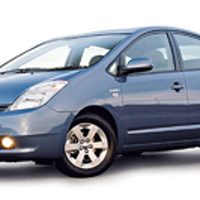 Positioned along a major bike path, his display attracts as many cyclists as pedestrians, intrigued by the row of identical rides. No money changes hands; this is a three-day demo by the Montreal bicycle-sharing company Bixi, which controls a fleet of 3,000 bikes in its home city, and hopes to launch a similar project in Vancouver. If your product is a simple, efficient path to environmental conservation and community building, the smiles come easy.

Despite decades-old initiatives such as carpooling, HOV corridors, and bike lanes, sharing vehicles has never taken a strong hold on our imagination. Approximately three-quarters of North Americans still drive to work alone, even though average vehicle fuel economy is lower than for the original Ford Model T, according to U.S. Environmental Protection Agency.

We seem to regard our vehicles as extensions of our personal space, a safe room on wheels for that scary public transition space between our homes and our offices. For a continent that has spent the past century expanding outward into the no-man's land of suburban isolation (and consequently increasing our commute times into the realm of the ludicrous), the concept of switching to bicycles, much less a system in which we share with strangers, seems like an idea whose time would never come.

The city of Amsterdam is generally credited with the first community bicycle program in which citizens could borrow or rent bicycles for short periods of time -- a 1960s initiative that has resulted in a worldwide reputation for bike- and pedestrian-friendly streets. Similar programs have developed in other cities since, with a 2005 venture in France regarded as the first widely successful modern version.

Look into shared-automobile companies like the Cooperative Auto Network and Zipcar. If you don't need to drive every day, these options are much cheaper than owning your own vehicle.
Jump in a pool. For regular drives, find ways to carpool with neighbors and co-workers, or take part in programs like Jack Bell Ride Share.
Share your regular errands (such as grocery shopping) with friends and neighbors to save fuel and participate in the community.
If you must purchase a car, buy used. The fuel savings of buying a hybrid may not make up for the enormous environmental cost of its construction. -- C.C.

Paris now supplies about 24,000 bicycles to kiosks throughout the city, with more than 50 million trips made since the program's launch in July, 2007. Similar programs, large and small, have since sprung up in cities around the world. Despite setbacks such as theft and vandalism, large, well-managed fleets in cities that are committed to the movement have held true to a simple rule: if you build it, they will pedal.

Montreal's Bixi team learned from Paris's frustrating experience with bike thefts -- and proved that technological progress can enable better sharing. The Bixi bikes contain a GPS chip that causes the bike to brake on its own and slow down if rented and not returned, as former Vancouver city councilor Gordon Price noted on his urban planning blog.

"When the general public and the municipal government sees how many people are on bikes they are more apt to make infrastructure changes to benefit the cyclists," says Tania Lo, associate publisher of the Vancouver-based bicycle magazine Momentum. "What no one anticipated was that even more cyclists started riding their bikes in the city because it was suddenly much more safe."

There is, of course, a gulf of difference between riding bikes and sharing bikes. Bicycles are very personal pieces of equipment, and in a city like Vancouver, which has a large biking culture, asking someone to share their bicycle is like asking to borrow their dog.

"It's like a musical instrument, something you have a connection with," says Dan Atkinson, who sells custom bikes at Dan's Bike Shop in Vancouver's Kitsilano neighbourhood. "It picks up your vibes and becomes an extension. . . beyond like 'I own a stereo.' If somebody steals your stereo, you get another one, but something like your bike, it becomes part of you."

Nevertheless, multiplying community bike programs (when they are aided by serious commitment to infrastructure changes) are making a positive impact in Europe, and are beginning to challenge the "yours vs. mine" attitudes we North Americans ascribe to everything from the grass in our yards to the views out our windows.

The social ramifications of creating shared property out of something that is traditionally a very personal mode of transportation require a sea change in our tendency to value ownership over community. But the time for widespread community bicycle programs in North America has not only come, it is long past due.

Still, no matter how easy we make it -- how many busses we put on the roads, how many kiosks with which we dot the city, how many bike lanes we carve out of the asphalt landscape -- some people will never leave the bubble of their cars. We need to haul things. We need to get places in a hurry. And sometimes, we just need a little "me time."

It would be naive to think we can get by without cars entirely, but those who just need the occasional wheels and still want to do their part for the environment have options too. Programs such as Zipcar and the Cooperative Auto Network (CAN) are gaining popularity as money-saving and environmentally friendly shared-resource networks.

For hourly rates that are a fraction of what you'd pay for a rental, you can grab a car for a half hour or a whole day. With some smart planning, like consolidating your errands into one day a week, using shared vehicles can be as much as 90 per cent cheaper than owning a car (maintenance, insurance, and even fuel are paid for by the company).

It is only a short step from carpools and public transportation to city-wide networks of shared vehicles. Over the past decade community bike programs have sprung up in more than 50 cities worldwide, and shared-vehicle companies have enjoyed double-digit growth as the automobile industry has faced double-digit decline.

Although Translink seems to have disappeared from the public conversation since initiating a shared-bicycle study more than two years ago (they would not comment for this story), there are high hopes in the bicycle community that something like Bixi will hit our streets soon.

Meanwhile, Zipcar and CAN locations have sprung up around Vancouver like blackberry patches, and recent initiatives by city government have paved the way toward a more bike- and pedestrian-friendly city.

It is up to us to press the advantage, to escape the confines of single-occupancy vehicles through a new commitment to sharing, and instead of entering a car when we step out our doors each morning, to enter a community instead.

Next Tuesday: Give the shirt off your back (and other ways to cut down on the damage new clothes do to the planet).