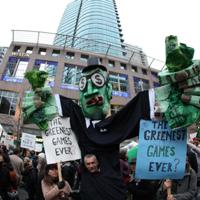 An anti-Olympics protest through downtown Vancouver turned violent Saturday morning. At least two protesters were hauled away in handcuffs near the intersection of Cardero and Georgia. The arrests followed physical clashes between activists and riot police. Several protesters claimed police brutality after they were hit with batons and wrestled to the ground.

The police, meanwhile, were trying to control militant factions that seemed intent on provoking a confrontation.

"I myself made a peaceful march down here," said Blayde, an activist with a green bandana stretched across his face. But many protesters today couldn't make the same claim. Clad in black with covered faces, some used newspaper boxes as battering rams to smash through windows at the downtown Bay department store and a nearby bank. "There's always gonna be some in a crowd that are gonna take it up to the next level," Blayde said.

Protesters gathered in Thornton Park, in front of Pacific Central station, at about 8:30 this morning. A crowd of about 300 pushed down Main Street towards Hastings. Bemused Chinese men watched from their storefronts. Cymbals clashed and tubas roared. The march took a left on Hastings and headed west.

Near Victory Square, a contingent of about two-dozen activists began to kick over newspaper boxes and spray-paint anarchy symbols and anti-Olympics slogans on the sides of buildings. The contingent was dressed head-to-toe in black. Some members carried a sign that read Anti-Poverty Committee, a group known for militant protests in 2007. Many of them tried to swat cameras out of people's hands, including accredited press.

One grabbed this reporter's notebook and yelled: "You're a fucking cop, aren't you?"

As the march progressed, the vandalism became more emboldened. Several of the black-clad activists pulled a large blue dumpster into the middle of the road and flipped it. Further downtown, activists charged with a Vancouver Province newspaper box into a window at the Bay building at Georgia and Granville. Others hurled eggs filled with red paint. More activists slammed a Metro newspaper box through a TD Bank storefront. A bystander, Marc Daigle, tried to confront one of the activists who did it, and was violently shoved.

"I don't mind protesting," Daigle told the Tyee. "When your protesting starts demolishing private property, you look like an idiot and your message doesn't get out."

By this point, riot police with wooden batons and plexiglass masks began amassing behind the march. They closed in on opposite sides of the sidewalk and began approaching individual protesters. One activist in black was grabbed by police. He punched a riot cop in the face, then ran back into the crowd. When police attempted to block the march at Cardero and Georgia, things got violent. People ran in all directions. Several activists were hauled to the ground. Others were hit with batons. Ryan Lundy, a non affiliated photographer who came to document the event, was hit several times.

"A cop came behind me and smacked me in the groin with his baton. I was hit from behind with a shield. I went down to the ground. Two cops hit me about three times," he said. As people began to disperse, two activists dressed in white with colourful wigs were dragged away in handcuffs and put into police paddy wagons.

Protesters wouldn't release the names of either. As of posting time, there were reports of about 80 protesters near Robson and Broughton streets and an estimated 150 police. Yesterday's mass demonstration at the Vancouver Art Gallery was praised by civil rights observers for being peaceful on all sides.

Stay tuned to the Tyee and The Tyee's news blog, The Hook, for more.