The last time I was here, I was scared. 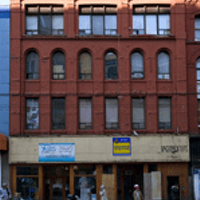 BC's Worst Drug Hotel Is About to Empty Out

The Backpackers Inn was nothing less than an indoor drug bazaar where violence was just part of daily routine. Truth be told, it wasn't so much the millions of bedbugs, thousands of roaches, hundreds of rats, or dozens of petty criminals that worried me; rather, it was the hovering presence of a charming but lethal mid-level drug dealer.

So it was with more than my customary measure of curiosity that I returned to 7 West Hastings. I was surprised by what I found. In less than two years, the Backpacker's Inn has been transformed from B.C.'s worst drug hotel into one of the best examples of the province's effort to end homelessness.

The Beacon Hotel -- as the building has been re-branded -- is one of 23 aging residential hotels owned or operated by BC Housing in the Downtown Eastside. All but one of those are expected to be reopened by January.

Critics of the $144 million investment -- $90 million to buy the hotels and another $54 million to fix them up -- have noted that because most of these hotels were occupied prior to purchase or lease by the province, and because hotels including the Backpackers literally evicted former tenants to make way for renovations, the reopening of these 1,325 rooms will not reduce Vancouver's homeless population on anything approaching a one-person, one-room basis.

But like the aging Victorian hotel on Hastings Street, many of the province's 23 single-room occupancy -- or SRO -- hotels are being remade in something fundamentally different from what they were before.

The tenants of the Backpackers Inn lived like sharecroppers, perpetually in debt to the drug dealers who ran the place, while the residents of the Beacon Hotel shuffle the tidy hallway in freedom. And with bare-bones nursing and outreach teams on-site in some buildings, the new residents of these old buildings have a chance to begin the long process of recovering from the addictions and other mental illnesses that have trapped so many of them in homelessness for so long.

The first clue to the transformation of the former Backpackers Inn stands atop of the front stairs. It's a door, and it's half glass.

The ordinary entry replaces a heavy steel hatch, complete with bars that slid into sockets on the back. Situated atop a steep stairway, the solid steel barricade was impervious to assault by ordinary beat cops.

"The police has a lot of trouble in here. They were never able to bust the operation," said Nikolas Longstaff, who manages the Beacon for the Portland Hotel Society, under contract to the province.

Indeed, during a previous visit to the Backpackers, I overheard a shouting match between police in the stairway and a manager crouched near the barricaded door. The manager had a phone in one hand. On the phone was a lawyer, advising him on what to say to the police.

The second clue is inside the manager's booth. It's a computer screen that monitors an array of 26 cameras mounted throughout the building. There were monitors in the old booth, too. But while the Backpackers cameras were all aimed at the street outside, most the Beacon cameras watch the hallways.

"There used to be a guy sitting at the front desk with an air horn. If the police did manage to enter through the front door, he would give a big honk on the air horn and hell, 'Six Up,'" Longstaff continued. "Pretty much everybody in here was employed by, um, the gentleman you mentioned earlier."

Longstaff is veteran of the Stanley New Fountain Hotel on Blood Alley. There isn't much he hasn't seen. And so it's no surprise he made the same choice The Tyee made in my 2008 report and again here: This particular 'gentleman' ain't dead, and we ain't going to name him.

His signature remains scrawled across the back of a cheap veneer cabinet in room 105. Handwritten with something like a Sharpie, it reads, "Not buying, get out!"

Steel bars had been mounted between the cabinet and the wall below, creating a secure wicket through which drugs were sold from a secure chamber to an anteroom.

"There used to be a wall safe over there," Longstaff explained. "And there was a chute-and-pulley system outside the windows, so that if the cops did come to do a raid, these guys would just put it up into a bucket. It got taken upstairs, down another chute, and out the back door."

This was the retail operation. Wholesale business happened upstairs.

"This was a big, large-scale operation," Longstaff said. "I've heard different numbers. Some say $90,000-a-day was flowing through this place."

The bars are gone now. So are the roaches, the rats, the rot and the stench that used to permeate the building.

BC Housing added more bathrooms (15 for 38 residents), a new ventilation system and repaired plaster and trim throughout much of the building. Additional upgrades were made at the request of the Portland Hotel Society in order to bring the building up to its safety specifications.

Longstaff has moved a couple into the former drug retail room, which, as a result of its previous design, is now the only unit in the building with both a sitting room and a bedroom.

"We've given them this nice big room to give them a step up," Longstaff said. "They're both former addicts. They used to be addicted to crystal meth. Both have gotten clean."

As is the case in most of BC Housing's 23 buildings, there is no treatment for mental illness or addiction offered in the low-barrier Beacon Hotel.

"We're just housing," Longstaff said. "But tenants can come to us at any time. If they are motivated to get clean, we are absolutely there to help them."

The room next door to suite 105 is an outreach office where staff help connect residents with counselors, welfare workers, or other service providers. Across the hall is a health office with a nurse scheduled to be on-site about 20 hours a week. Around the corner is one of three kitchens; a hot lunch is served daily.

"That one meal a day -- often just macaroni and cheese, or chili -- that makes a huge difference in their lives," Longstaff said. "Instead of going out and scoring more dope, they might just go downstairs, have a meal, then go back upstairs and watch a movie."

'This is better than all of 'em'

Don Hanson was one of the first to move in to the new Beacon Hotel in mid-September. He got a room in the front, with windows overlooking Hastings Street.

"I kind of like it. It's nice and big," said Hanson, one of 30 men and 8 women who now call the Beacon their home.

"It's cleaner. Healthier. I weigh more," he chuckled, his soft blue eyes peering out over a scraggly beard.

Hanson is six months clean. He moved to the Beacon from the Onsite recovery program, which is connected to the supervised injection facility known as Insite. The 47-year-old said the last time he was clean was in the early 1990s.

During a decade lived on and off the streets of the Downtown Eastside, Hanson had lived in several residential hotels that resembled the old Backpackers.

"The Brandiz. The Columbia. The Chelsea." He rattled off the list of drug hotels he'd called home.

"There, people were knocking on the door all the time. Anything they could try to get out of you, basically. It was constant, through the day and night. Rigs. Food. Cigarettes. You name it," Hanson said. "This is better than all of 'em. It's cleaner, quieter."

Longstaff hopes that over time, the number of tenants like Hanson will overtake the number still in active addiction.

In order for that to happen, Longstaff has to keep drug dealers and other predators out of the building. Their ongoing attempts to return are among the most persistent risks faced by each of BC Housing's 23 residential hotels in the Downtown Eastside. For without the safe environment described by Hanson, aging hotels such as the Beacon could quickly revert into hell holes like the Backpackers -- except next time, they'd be hell holes owned by BC taxpayers.

"It always starts off as a party," he chuckled, referring to the way dealers ply addicts with drugs and sexual favours in order to gain access to virgin territory such as the Beacon. Then they collect the debt by taking over the room.

"Drug dealers and thugs would walk into somebody's room and say, 'Your room is mine now. Get out.' And the person would have to continue to pay their rent. And their room would be taken over as either a drug room or a room to be used for prostitution," Longstaff said.

"Our aim is to keep that element completely out of this building," he continued, "and to make the rooms available for the homeless people who need them."

In fact, the renowned dealer who controlled the Backpackers for years has already come sniffing around the Beacon.

"Yeah, him and somebody else came to the front door," Longstaff said. "They were just checkin' it out, seeing what was going on."

Longstaff spoke with him via the intercom, but did not buzz him in.

"We talked," Longstaff said. "He was told that what happened here before, that wasn't going to be happening again."

Next week: The state of homelessness in Surrey.