My daughter is glaring at me. I have told her that nail polish, like TV and fast food, might be considered "normal," but is banned in our house. She is working on her best pre-teen "I hate mom" look, something I have grown accustomed to. Mood swings, self-consciousness, and a general feeling of mortification at everything I do or say have become commonplace in our home. Our doctor tells me that -- based on her development -- my tween will have her period within the year. Except she isn't a tween; she is only nine. 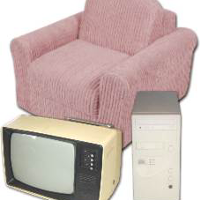 She is not alone. All her friends in Grade 4 are "budding." The mothers gather in groups, whispering, comparing notes, bewildered that our daughters are going through such a huge hormonal change at least three years earlier than any of us did. An eternity of time in child-years. Three years that should be spent hating boys, and running amok in disheveled groups. Instead, they're talking about periods, body odor, and going through the horror of buying their first bras. At nine.

And those are just the social implications. The Breast Cancer Fund website says early-onset puberty in girls is heavily linked to the global breast cancer epidemic.

Of course we had heard of this happening, you know, down in Latin America. But we represent the best in B.C. holistic childrearing; our children have been raised on organic snacks, and non-GMO grains. They were refused TV, and brought to expensive Montessori pre-schools. We are young, fit, healthy and educated, so how could this be happening to our children?

Our kids as guinea pigs

North America has become a great chemical experiment and our children are the guinea pigs. By the time we tuck them into bed at night, they have spent the day in contact with a cornucopia of toxins, in combinations that no scientist has ever studied. Our carpets are off-gassing, air fresheners are nerve-deadening, and our shampoos are potentially altering fetal development. According to recent studies by Heather Stapleton and the Boston University School of Public Health, even our babies are crawling in a sea of toxic dust-bunnies that can lead to cancer and infertility.

What can we do? As consumers, we don't have the right to know what is in our cars, homes and children's toys that is making us sick. Want to know if your child can get cancer from her water bottle? Better break out your science degree, if the toxins are listed at all. Unlike European countries, which force manufacturers to fully disclose toxic content in plain language, Canada has no labelling requirements for most consumer goods. Canadian companies are allowed to protect their "trade secrets" even at the cost of human health.

What is that cost? Up to $9 billion per year are spent dealing with respiratory diseases, cardiovascular illness, congenital affliction and cancer associated with mostly preventable adverse environmental exposures. That's the finding of a 2007 study entitled The Environmental Burden of Disease in Canada produced by Simon Fraser University. And that doesn't take into account things like dropping sperm counts, and early-onset puberty, for which it would be hard to estimate a cost.

Even though we know we are poisoning our environment and ourselves through a dangerous addiction to consumerism, most of us continue to feel unable to control what is happening to the planet. Ineffectual Kyoto accords, green initiatives (like hybrid cars) that only the rich can afford, along with a recent study from Wal-Mart Canada that showed that 79 per cent of Canadians choose price over the environment when it comes to buying products -- these all inspire the general feeling that going green may be going the way of the dinosaur during hard economic times.

Perhaps our apathy about buying green stems from our skepticism about green claims that we cannot check. A study put out in March by BBMG (a socially conscious marketing agency) found a 23 per cent "green trust gap" in U.S. consumers.

But what if we could check the ingredients of many of the products we use every day? What if we had the ability to control what kinds of chemicals were being manufactured and used in the world around us? Sound impossible?

Not entirely. The rights you do not have as a consumer, you wield in the workforce. Canadians have -- right now -- real power to change our environment through labour laws that have existed since the mid-'90s, and are arguably the strongest environmental laws in the country.

More importantly, a number of ordinary people are already quietly doing just that. This is the first in a five-part series that looks at how we can control what is happening in our environment, and how a new breed of eco-warrior is emerging from what some might find and unlikely source, the labour unions.

What are manufacturers trying to hide?

In plain language, carcinogens are substances that cause cancer by altering or damaging the cell's DNA: a nucleic acid that contains the genetic instructions used in the development and functioning of all known living organisms. We continuously make copies of our DNA; the quality and integrity of those copies determine our health.

Asbestos and vinyl chloride (predominantly used in the production of PVC) are examples of carcinogens that have been effectively reduced in consumer and workplace components. But industrial and household cleaners, pesticides, insecticides, and pet-flea control are just some of the products that still contain "safe" (according to industry standards) amounts of carcinogens.

Reproductive toxins are substances that poison the reproductive system. They can cause damaged sperm in men, infertility in women and early puberty. They can also damage growth in children and fetuses. Heavy metals like arsenic, or the lead recently found in some imported toys, are the most common offenders.

Recent research by Kim Dietrich at the University of Cincinnati College of Medicine found a link between lead contamination in fetal development or during early childhood, and adult antisocial behavior leading to arrest. Even a tiny amount, a five- microgram/decilitre increment in prenatal or childhood blood lead levels, was associated with a 26 per cent increase in the rate of arrest for violent crimes.

Mercury is another good example, and can be found in everything from the fillings in our teeth, to "silent" light switches. In the book Slow Death By Rubber Duck, one of the authors ate tuna for every meal for three days. Simply upping his tuna intake catapulted the mercury in his blood to levels that would be dangerous to a pregnant woman.

Possibly the least understood and most terrifying are the endocrine disruptors. Unlike other chemicals, endocrine-disrupting chemicals (EDCs) can cause damage even at extremely low levels of exposure. These chemicals mimic natural human and animal hormones. When released into nature, they can either block natural hormones, or exaggerate their effects.

Tony Clement, when he was federal health minister, banned baby bottles containing bisphenol A (BPA) because tests on mice show that it mimics estrogen, and can affect early childhood development. Another well-known EDC is polychlorinated biphenyl (PCB).

Even if we restrict their use, many EDCs persist in the environment by accumulating in the food chain through the fats of mammals.

EDCs have been found in the breast milk of both humans and animals, even those who live far away from any obvious pollutants. Significant EDC contamination can come from the air, drinking water, and particularly skin through contact with chemicals in household and industrial products, cosmetics and clothing.

With EDCs the poison is not the dose; it's the timing. These chemicals can profoundly affect fetal or early child development at critical growing stages. They can cause emasculation, improper development of reproductive organs, including incomplete development of testes, and early-onset puberty in both animals and humans.

Even more sinister are the implications for women. New studies have shown that regular exposure to EDC's during pregnancy -- even at low doses -- can potentially affect the next two generations, since the eggs for the next generation are already being developed in the fetus. In other words, your grandmother -- in some ways -- was carrying you inside her body.

"What people are realizing now," says Mae Burrows, executive director of Toxic Free Canada, from her office in Vancouver, "is that you can't just look at the lifestyle of the 45-year-old woman who is developing breast cancer; you have to look at what her grandmother was exposed to."

As a consumer, I can only hope to curb the sea of toxins in which my daughter has been swimming since she was in utero. Unseen substances around her may have already affected her physical growth. We have been playing with powerful chemicals in everything from the fuel for our cars, to the teething toys we gave our children to suck as babies.

In the next article, we will look at how we can use Canada's labour laws to educate ourselves on toxic ingredients, and reduce the mass consumption of unnecessary chemicals in our environment.

On Wednesday, 'Toxics: The Right to Know, Part 2.' The Tyee looks at how we can use our labour laws to curb chemicals to safe levels, and how to decide what "safe" means when it comes to some of the most toxic ingredients made by man.