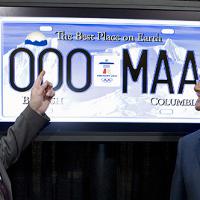 BC No Longer Calls Self 'Best Place on Earth'

[Click through the photo essay above to view collection of retro British Columbia pins.]

BC No Longer Calls Self 'Best Place on Earth'

Remember when British Columbia was The Best Place on Earth?

The controversial slogan, accompanied by a sunshine and mountains logo, adorned government letterhead, business cards and websites starting in 2005 and even graced a special Olympic-edition license plate launched in 2007.

It also sparked a heap of criticism and an online petition from many who thought the slogan was too brash, too arrogant and decidedly un-Canadian.

Although Pat Bell, minister of jobs, tourism and innovation at the time, said it was meant to motivate British Columbians, NDP critic Spencer Chandra Herbert noted in one debate that although he personally thought of B.C. as the best place on earth, "it was probably not the best way to attract people from other parts of the world..."

In 2011, shortly after Christy Clark became premier, the moniker was quietly dropped.

It might not have been the best slogan for a government to adopt, but -- as evidenced by this collection of retro British Columbia pins recently discovered at the Cloverdale flea market -- it's not the worst tagline ever attached to this province.

Although the official slogan of Tourism BC was, and is, "Super Natural British Columbia" -- a hard statement to argue with -- there have been a number of doozies that make "Best Place on Earth" seem not so bad.

This collection also sheds new light on places we at The Tyee thought we knew. Victoria, for example, is not just for students, retirees and provincial politicians; it's also for lovers. Port McNeill is not only the birthplace of Stanley Cup champion Willie Mitchell, it also boasts the world's largest burl.

If any of these pins trigger fond memories for you, we'd love to hear about it in the comment thread below.