British Columbia is lagging in providing detailed information on COVID-19 cases, and its failures are undermining efforts to protect the public, says an expert in data-based modelling.

But since the pandemic hit, von Bergmann has increasingly turned his attention to analyzing COVID-19 data and preparing models to help understand the spread.

But the big gaps in available data in B.C. — even compared to other provinces — have forced him to do a lot of extra work.

And the lack of data has made crucial modelling work difficult, imprecise or impossible, he says.

Von Bergmann isn’t alone in his criticism. Mario Possamai, a former senior advisor to the Ontario government’s SARS Commission, recently prepared the report A Time of Fear that found key lessons from that outbreak are being ignored by Canadian jurisdictions.

And B.C. is among the worst offenders, the report says, as the province is failing to provide specific data the SARS Commission — an investigation of the 2003 SARS outbreak in Ontario — found was crucial to safeguard health workers. The report was commissioned by the Canadian Federation of Nurses Unions.

“The most problematic jurisdiction may be British Columbia,” Possamai writes. “Its publicly disclosed data has been incomplete, inconsistent and on occasion, seemingly contradictory.”

Von Bergmann is forced to extract data based on the province’s COVID-19 graphs and charts — data that is readily available in easily used forms in other provinces. That means he’s spending more and more time coding or poring through everchanging visual graphs and reports to extract relevant information.

Other groups — parents and teachers, journalists and researchers, Indigenous leaders and unions — struggle with the same workarounds, pooling and sharing data to try and make up for the lack of information from government.

Countries such as Taiwan, Singapore and even other provinces are providing data on things like locations of cases and demographics of patients aiding independent research — information B.C. is not providing.

When challenged on missing or late data, health authorities in B.C. have responded by saying they don’t have time to compile the information, claiming they provide it, or citing privacy concerns.

But critics say privacy risks are minimal and justified as providing quality data that enables public trust and independent research is a crucial part of the fight against COVID-19.

Von Bergmann, who holds degrees in physics and computer sciences and a PhD in mathematics, spoke with The Tyee and identified some of the key issues that researchers have encountered.

Where are people being infected?

Daily statistics on cases released in B.C. are broken down by health authority on a map on the province’s COVID-19 Dashboard.

But the data is of little value, says von Bergmann.

The five geographic health authorities are huge — Northern Health covers 600,000 square kilometres, almost five times as large as Nova Scotia and New Brunswick combined. Information on cases in an area that large doesn’t allow analysis of where COVID-19 is spreading.

And the boundaries are strange, says von Bergmann. Richmond and Vancouver are part of Vancouver Coastal Health, but Burnaby is not.

“If you’re looking at how to inform the public, this is probably not the geography you want to do it on,” says von Bergmann.

Alberta, Ontario and Quebec all provide case data by municipality or even neighbourhood, he says, and it’s not clear why B.C. doesn’t.

Municipalities have asked for that kind of data so they can respond to the pandemic in their communities effectively, von Bergmann said, but they’re not getting it.

The Abbotsford News reported the province went so far as to redact municipal COVID-19 numbers in responses to freedom of information requests, citing threats to health or privacy.

The province does provide weekly reports that are based on Health Service Delivery Areas and Local Health Areas — the divisions and subdivisions of the regional health authorities. (Until mid-December, Local Health Area data was only provided monthly.)

But the delays in presenting the information and concerns about accuracy reduce their usefulness. Von Bergmann finds case numbers aren’t consistent with the daily reports based on health authorities.

Which workers are getting COVID-19?

According to Possamai, the need for this data was a key lesson for the commission. But provinces are failing to apply this lesson during COVID-19.

Data for health workers in particular must “allow monitoring and trend analysis by occupation and sector,” wrote Possamai.

The information needs to be detailed, he said, with data on exactly which kinds of workers are being infected — nurses, care aides, doctors, for example, rather than health-care workers. It needs to include where the people worked and their roles. And it needs to be shared in real time, not delayed by weeks or months.

“And the performance of the system must be monitored and tested regularly,” he added.

The data, Possamai writes in his critique of Canada’s failure to learn from SARS, is especially crucial in dealing with spread in the health-care system.

“It sent me on a month-long journey with Statistics Canada and the Public Health Agency of Canada to track down where else this missing data could have gone wrong,” said von Bergman.

After followups by journalists and researchers Henry confirmed that B.C. ceased sharing the detailed data. She said the province feared it would be misinterpreted.

Male or female, young or old?

The data is important in attempting to project things like future hospital demand, he says. If more older people are being infected, modelling could provide advance warning of a surge in demand.

The project was made far more difficult, less timely and less accurate due to data shortcomings, von Bergmann said. And B.C. is the worst offender in failing to provide data to national record-keeping, he added.

At the time of this interview, B.C. had not provided the age breakdown of cases and deaths for more than a week, he said.

Von Bergmann said the government has changed reporting formats or simply stopped reporting some data several times during the pandemic, making it harder for researchers to track and understand the spread.

The province also stopped providing the Public Health Agency of Canada with data about symptoms of infected people, which makes it harder to paint a picture of what is happening nationally, he said.

And it has routinely changed the format of data presentations in ways that make it harder to trace and analyze trends.

B.C. does not provide a daily total number of school exposures — known cases of COVID-19 in a school where other students may have been exposed. When researchers asked the BC Centre for Disease Control why the information was available, they were told staff don’t have time, von Bergmann says.

When exposures occur, health officials make contact tracing a priority. Only when that process is complete are letters sent out, usually only to parents of children in the class where students have been exposed to COVID-19, he says.

The local health authority will typically only post the exposure information on its website three or four days later, he added.

Parents would benefit from immediate disclosure, von Bergmann said. Their children might have played with students from a class or school where there has been exposure, and the information would let them watch for symptoms and isolate if needed. It’s especially critical for parents of children who are immunocompromised, he says. The potential privacy risk is far less than the danger of not providing the information, he argues.

Where is COVID spreading, and what’s the transmission rate?

The “R-value” — the average number of people being infected by each person with COVID-19 — has been a standard for understanding the rate of transmission and taking steps to reduce the spread.

But a calculation of R-value has only been provided to the public once a month in B.C., says von Bergmann. And BCCDC modelling methods don’t provide complete information on transmission rates, he said. Cases connected to outbreaks — situations where multiple people are infected — are excluded.

Unlike other jurisdictions, B.C. doesn’t provide the data that would allow researchers like him to calculate the R-value themselves. Ontario’s data, for example, includes information on the date symptoms first appeared and the infection date, which allows analysts to calculate R-values more precisely. In B.C., that information is unavailable.

Von Bergmann contrasts B.C.’s reporting with Taiwan, which has had just seven COVID-19 deaths. Its government releases data on each case, including whether it is tied to a known cluster, where the infection took place and other detailed information useful for researchers and policy makers.

The B.C. government has made improvements, says von Bergmann. It had been combining private test results — such as from movie companies testing film crews — with public health testing. That skewed the overall test positivity rate for the public.

In November, after criticism, B.C. began separating the two. 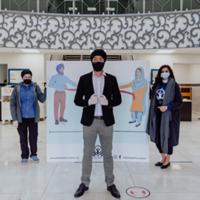 From Gurdwaras to Truckers, How to Protect a Diverse, Working Suburb

Von Bergmann and other researchers have been sounding the alarm on the importance of data integrity since early in the pandemic.

In the pandemic’s first months, when B.C. was the envy of most provinces for its COVID-19 management, data criticisms didn’t often leave the inside baseball discussions of researchers.

But as the province’s per-capita infections climbed high above those of Ontario and Quebec by the end of November, the pressure to improve B.C.’s data has increased.

Last week, the BC Centre for Disease Control said it would provide Local Health Area COVID-19 figures weekly, instead of monthly.

That’s a positive step. But von Bergmann says the province has a long way to go in fixing a flawed reporting system.