After a decade at The Tyee, I am ending my time as editor-in-chief next March.

Leaving is hard, and I hold only positive feelings for the organization and my days at the helm.

I instantly fell in love with the place at the first editorial lunch I attended, over dim sum at the Jade Dynasty in Chinatown, in May 2011. I was starting as an intern and remember sitting across from Crawford Kilian, a long-serving Tyee columnist, who enthralled me with stories of his amazing life. I’d later know him as “Grandpa Sunshine” for his hard-hitting, often acerbic analysis for the site.

I was drawn to the quality of The Tyee’s journalism and felt connected to the values of equality and justice that underpinned the work. And I never left.

Over the next 10 years, I discovered The Tyee is a team in the truest sense. All along I’ve been buoyed by the support and wisdom of countless people who’ve contributed to it, who believe in the necessity of independent journalism. I’m fortunate to have been able to hone the craft of editing by working alongside colleagues with valuable experience to share, including founding editor David Beers and senior editor Paul Willcocks.

There have of course been many highlights, accomplishments and impacts by the team to celebrate. The fact that we’ve grown significantly in size and reach is the result of so much hard work by everyone.

But the real delight of The Tyee has always been the wild and wonderful day to day. There’s rarely a dull moment.

One day, I’d be polishing a touching eulogy for one of The Tyee’s most prolific commenters. The next, I’d be presenting to a House of Commons committee, telling them what’s what about the media industry.

True, I acquired one deep forehead wrinkle for each election we covered. The hours could be long. And my podcast experiment of 2012 was a failed one. (RIP Chumbucket — maybe the name was the problem?)

But I’ve had the best colleagues. And we have the best readers. The Tyee is something very special in this world and I got to be a part of it.

So why leave? I’m just ready to get out from behind my desk and experience life in different ways. I’m going to untether from the internet and bury my laptop at the back of my closet for a while. 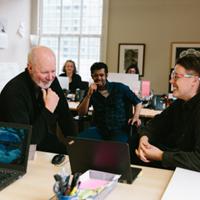 The Tyee is Hiring a Managing Editor

The Tyee has a strong team and game plan for its future led by our publisher, the incredible Jeanette Ageson. I’m proud of where we are, so it’s a good time to go.

I’ll miss the daily interactions with my friends and colleagues, but I won’t be going far. They’ll never truly get rid of me. Sorry guys. Don’t even try to edit this out.

Meanwhile, starting in March, David Beers will be assuming the role of interim editor-in-chief. We’ve also posted a new leadership position for the newsroom, a managing editor. Please don’t hesitate to contact me if you’re thinking about applying. I have so many good things to say.

Thank you dearly to everyone who supported me in the role. I look forward to keep fighting for a better world with you. Hopefully we can meet soon over dim sum. Look out for my call, Grandpa Sunshine.