I was a sophomore reporter at The Tyee in the summer of 2009, reporting on sustainably certified wood development in the interior of British Columbia, when I drove by a sign on a lonely country road that stopped me in my tracks.

It was a simple carved wooden sign hanging at the end of Big Lake Road, somewhere on the stretch between Williams Lake and Horsefly, and it said: The Deaks.

I knew I'd stumbled across something big, the kind of scoop that journalists dream of bringing back to the office. We'd been hearing from Ed Deak, of Big Lake, for years. He was The Tyee's most consistent commenter, from the site's inception in 2003 until his death this June.

Ed was a rare but much appreciated creature in online news: a considerate, polite commenter and faithful reader who used his real name and offered praise and critique alike, but who never baited, trolled or attacked. Nearly every story we published elicited a response from Ed, and nearly every response included some version of his general credo: ''Wealth is the temporary control of energy. Wealth can not be created, only taken from other sectors, the environment, or the future.''

He claimed a ''45-year record of fighting communism'' and insisted that religious empires and governments were the ''worst enslavers and mass murderers in history.'' He rarely strayed from his talking points on the deeply flawed economic system and fraudulent accounting systems used to calculate the GDP.

While he appeared to hold out some hope for solutions (which must entail ''the rebuilding of self-sufficiency at all levels''), there was a predictable pessimism in his posts (''Going downhill by the day, yet, people still support the worst crooks and fools'') that while not unfounded, did invoke images of a robe-clad cantankerous old coot, ranting into his computer at all hours of the day and night.

How wrong we were.

When former Tyee web editor Geoff D'Auria unearthed a black and white nude sketching in an antique store, signed Ed Deak, we were surprised and delighted. Ed Deak? Art? Nudes? There was something more to this man. Well, of course. But little did we know how much.

Ed Deak was an organic farmer, an artist, a cabinet-maker and a rally car driver. He was a husband, father, grand-father and great-grand-father. He was a romantic, a dreamer, and a risk-taking adventurer who lived fully right up until his death.

Deak was born in 1927 in Szegard, Hungary, a country at that time in the midst of a major shift to the radical right. As a young soldier in the Hungarian army during the Second World War, he was taken as a prisoner of war and faced with a death sentence in the gulags. Fortunately, the end of the war saved his life -- and ultimately led to meeting the love of his life, his wife Marta. 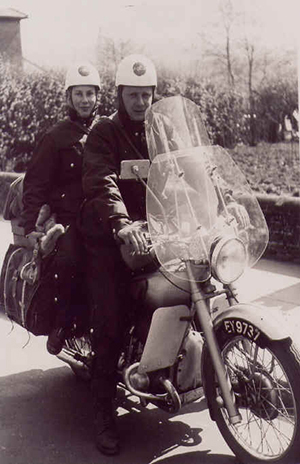 Ed and Marta crossed Canada on two wheels long before the TransCanada highway was built.

The two met in 1945 in a military hospital in Obertraun, Austria, where Ed was sent to recover from a leg wound. Marta, a Hungarian refugee, was helping her parents clean the hospital, working only for food. She was 17, he was 18, and it was love at first sight.

They moved to England, married and lived there seven years. In the spring of 1955, Ed and Marta embarked on the adventure of a lifetime, buying passage to Canada on the Greek Line Ship Neptunia for themselves and their 1951 MkV Douglas motorcycle. On April 28, after 10 days at sea, they arrived in Montreal and began a four-week and almost 4,000-kilometre motorcycle trip across Canada.

This was long before the TransCanada highway was built, and they traversed gravel roads and sand so deep that Marta had to sometimes hop off while Ed pushed the bike along. It cost $206, ''including food and beds every night,'' Ed wrote in a detailed account of the trip.

They landed in Vancouver, where they lived for several years. Ed worked as a cabinet-maker and pursued a passion for rally cars that first developed in post-war England. He crossed the country five times in the 1960s as part of sponsored rally teams (sometimes along with Marta). Ed became president of the Columbian Autosport Club in 1964 and participated in and officiated at many events throughout the Lower Mainland in the '60s and '70s. In 1965, he created the "Deak Trophy" to honour the top rally navigator in Canada.

One particular rally through the interior of B.C. led Ed to fall in love with the Cariboo-Chilcotin region, and in 1979 he and Marta settled at their ranch in Big Lake. They raised three children there, farmed organically and made art, a pursuit they shared well into their 80s. Both kept their own studios at the ranch, and were members and supporters of the Station House Gallery in Williams Lake. Some of Ed's pencil drawings of old Cariboo buildings are displayed in the Museum of the Cariboo-Chilcotin in Williams Lake. In 2012, Ed and Marta held a rare exhibition of their oil paintings, donating all proceeds to the gallery to help sustain in the wake of government funding cuts. Their exhibition was aptly titled, "The Gift."

In 2011, Ed wrote of his lifestyle: ''We don't think of ourselves as being marvellous in any way, just survivors who woke up to the constantly ongoing fraud of mental enslavement, managed to free ourselves of the effects of various kinds of brainwash that ruled and ruined the world since its beginning and doing our best to warn others in our small, limited ways.''

In a short tribute to Ed published in the Williams Lake Tribune, he is described as a valuable member of his local community and a good friend to many. He was a valuable member of The Tyee community as well. We'll miss him. But we venture to say that, in some ways, he proved wrong his own assertion that ''wealth cannot be created'' -- at least if we consider true wealth to include more than money. For he clearly created a wealth of ideas and art and memories, and a fighting spirit that will live on.