We’re seeing reports of a “polio-like” disease turning up in Canada and especially in the U.S. Acute flaccid paralysis is leaving kids partially or completely paralyzed, and parents are understandably scared. The U.S. reportedly has 60 cases so far this year, and Canada has perhaps 30.

AFP and its subtype, acute flaccid myelitis, are even becoming a political issue: the right-wing American Association of Physicians and Surgeons warns about the “public health threat from uncontrolled immigration” and suggesting that the “caravan” of asylum seekers might be bringing AFP with them.

As literally a one-in-a-million disease, AFP is a faint echo of poliomyelitis itself. But it comes at a time when we’ve forgotten how deadly childhood diseases can be, and many have even begun to question the vaccines that saved both them and their parents from death or lifelong impairment.

Seventy years ago this month, I was seven years old, running a fever, and unable to touch my chin to my chest. Every parent in 1948 knew those were likely symptoms of polio, and that same afternoon I was in a downtown hospital for tests. They showed I was indeed one of over 20,000 polio cases in the U.S. that year.

My memories of the next two weeks are fragmentary but vivid. I’m carried on the shoulder of a tall black man to undergo a spinal tap — not a funny phony band, but my first experience of real pain. I’m in a ward with other kids, each of us in a crib — a crib! — learning to use bedpans and suffering the further indignity of having our temperatures taken rectally. Drop a comic book through the crib slats to the floor, and it’s gone forever.

Every day we lie on our stomachs in our cribs while “hot packs” — steaming-hot blankets — are piled on us. This is state-of-the-art therapy for polio patients.

Toward the end of my hitch, I’m taken from my crib in a wheelchair, plunked into a bathtub and sloshed with green disinfectant soap. Then I’m taught how to walk again. After two weeks in a crib, it’s not easy.

Finally back home, I begin to understand that I am really lucky. Other kids have died, or been trapped for life in iron lungs that keep them breathing. When I’m back in school, I see a girl with a brace on one leg from her own case of polio. She’s not the last.

If anything united Americans and Canadians in those days, it was the wish for a polio vaccine, and when it arrived in the mid-1950s, no one fretted about its possible hazards. We trooped down to the local high school gym, lined up, and popped vaccine-laced sugar cubes into our mouths. Even polio survivors did — you could catch it again, and a high-school classmate of mine did just that.

Epidemics and pandemics have a little-known consequence: mass amnesia. My grandparents never talked about the flu pandemic of 1918-20, though they and their own children could have died in it. Just a decade ago, the H1N1 pandemic killed an estimated 201,200 people worldwide. Unless you caught it, you likely haven’t thought about it since then.

But amnesia is a traitor that lets old enemies through the gates. We used to have “chickenpox parties” for kids, so they’d catch it from some other kid; now as seniors we’re dealing with shingles, an intensely painful sucker punch from the chickenpox virus that hid out in our bodies for decades.

Measles was considered another routine childhood illness, except in the families that lost their children to it. After the mid-1960s, measles vaccine saved millions of lives but trivialized the genuine threat of the disease. Now the European Centre for Disease Control reports ongoing outbreaks in Greece, Ireland, Romania and Slovakia, with 33 deaths so far this year. In the U.S., the Centers for Disease Control has recorded 142 cases so far this year. Here in B.C. we had a brush with measles in 2014 among members of a Fraser Valley religious community.

Failure to vaccinate is the chief cause of measles outbreaks, often starting with communities with religious objections to vaccination. But while outbreaks may start there, they can spread into the larger community if it has a vaccination rate below 95 per cent. This creates “herd immunity”: the virus can’t spread to susceptible people because so many immunized people are in its way. The same is true for other diseases like seasonal influenza — the more vaccinations, the smaller the chance of infecting those most vulnerable to it, like the elderly and the immunocompromised.

The anti-vaxxer movement is energetically attacking vaccination as a pillar of public health. The movement seems to think medical experts are some kind of self-serving elite, and prefers to heed populist politicians and celebrities — who are a true self-serving elite.

Such cranks and charlatans have always flourished on the margins of society; I well recall the anti-fluoridation movement of the 1950s. But such critics couldn’t get much traction until the rise of social media. Now they infest Facebook and Twitter, reaching anxious, poorly informed individuals and merging them into politically significant numbers. As groups they enjoy an ironic “herd immunity” to scientific evidence, and the problem goes on.

Living with a real and present danger to their children, the parents of the 1940s and 1950s had no time for quacks. They got the vaccine at the first opportunity, taking the first steps to eventual eradication of the disease. 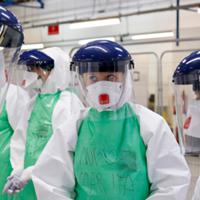 How Trump Is Making a Global Pandemic More Likely

Now polio is in retreat worldwide. Even in the tribal areas of Pakistan, vaccination teams have been saving a generation of kids — at the risk of being shot dead in the street by suspected Pakistani Taliban supporters who think the vaccine is a foreign conspiracy. Despite the violence, they are getting close: the World Health Organization says wild poliovirus cases have fallen by 99 per cent since 1988.

But WHO warns that, “Failure to eradicate polio from these last remaining strongholds could result in as many as 200,000 new cases every year, within 10 years, all over the world.”

If that happens, rest assured that the cranks and charlatans will build another anti-vaccine campaign into their business plans, just as they will if we develop a vaccine against EV-D68, the virus that causes AFP. As long as a reservoir of stupidity exists, in the tribal areas of Pakistan or the suburbs of Vancouver, preventable diseases will threaten our children.