The latest report from the International Panel on Climate Change, commonly referred to the IPCC, paints a bleak picture of the climate crisis. UN Secretary-General Antonio Guterres calls it “an atlas of human suffering and a damning indictment of failed climate leadership.”

Nowhere is that failed leadership more evident than in Canada.

Despite the dramatic promises of Prime Minister Trudeau on the international stage, Canada remains an outlier among the G7 for our ongoing failure to address the continuing rise of greenhouse gas emissions.

It's not that the Liberal government doesn’t have a plan. But their strategy to reach Net Zero by 2050 includes seriously contradictory objectives that will lead to increases in oil production and pipeline investments. It is backstopped by hopelessly optimistic numbers.

The cornerstone of the Liberal plan is carbon pricing. Theoretically, a high price on carbon should force the market to shift to lower-cost renewables. Here’s the problem. Both Canada’s energy regulator and the Canadian Association of Petroleum Producers have factored in the rising price on carbon and have concluded it is still possible to vastly increase production. Canada’s energy regulator predicts that our oil production will increase by 1.2 million barrels a year by 2030. Thus, the polluter will pay, but can still make a lot of money by polluting more.

The second tool in the government’s arsenal was introduced by the Prime Minister at COP26 when he committed to establishing a hard cap on emissions. The problem is the cap on emissions doesn’t include capping production.

The government’s own Net-Zero Advisory Body, which has a mandate for “prioritizing early and deep reductions,” has stated it that takes no position on whether a major increase in oil production contradicts their role to push for deep reductions in emissions.

Welcome to the great Canadian disconnect. Believing that it is possible to get to lower emissions while increasing production is to accept the “light cigarette as a healthy alternative” proposition.

It breaks down like this: Canada’s oil sector is heavily dependent on oil sands production, which has been identified internationally as among the dirtiest on the planet. Both industry and government have long tried to shift focus from overall and absolute emissions to the prospect of reducing the intensity of emissions per barrel. This is the equivalent of claiming that heavy tar cigarettes can be repackaged as a light brand. The strategy has failed and emissions continue to rise.

This leads us to the proposal to undertake investment of upwards of $75 billion to promote Carbon Capture in order to keep up production while pumping emissions deep into the earth.

This past January, 400 scientists and academics wrote to Minister Chrystia Freeland urging against banking Canada’s climate strategy on unproven technology. Will the government listen to 400 environmental experts? Not likely. 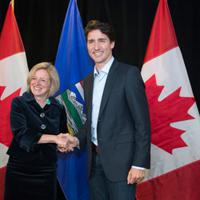 And this leads us to the fourth and key pillar — the $21 billion investment in the TMX pipeline. This pipeline will allow for a massive increase in bitumen for export. The government has argued that profits from the export of bitumen will be used to help mitigate the climate disaster. But the real bonus for this government strategy is that none of those emissions burned offshore are counted as part of Canada’s GHG burden.

This brings us back to the cigarette comparison. An article in Forbes points out that Big Oil, like Big Tobacco, has realized they have lost the climate crisis debate in North America and have thus switched strategies. They are now focused on greenwashing at home while massively increasing exports to the Global South. Yet even without this expected increase in exports, Canada’s collective offshore GHG emissions are higher than all the emissions in every sector in Canada combined.

Not counting emissions from our offshore exports may be great for business and good for the government’s international reputation but it is potentially catastrophic for the planet.

Which brings us back to the IPCC report.

Unless we undertake a serious reduction in emissions, Canada is consigning our children to a zero-hope future.