I’m the editor of Briarpatch, an award-winning national magazine of leftist politics and grassroots activism. I’m also 24 years old, belong to no political party, and terrified for my future as climate change accelerates at a breakneck pace.

While ever more alarming headlines trumpet the imminence of climate disaster, I’ve watched the Green party gaining ground in the polls.

But apart from Elizabeth May’s sincere and immutable hatred for pipelines (which I’m into), I wondered what the Greens actually stood for — and I noticed widespread confusion about that. So I spent the last month reading past and present Green party platforms, every page on their website, and dozens of interviews with candidates to try and find out.

What I learned was this: the Greens are undeniably strong on environmental issues. But if they truly care about a livable future for all, they need to back up their supposed commitment to social justice with specifics and action.

When the Greens released their full 88-page platform last month, it largely read like a progressive Christmas list. Yet there appears to be a gulf between what they’ve said and what they’ve actually done. Now, no party is without rogue candidates or moments of hypocrisy. But this year, the Greens’ attempt to shake off their old reputation for being “Conservatives on bikes” isn’t going smoothly.

Their campaign materials put reconciliation with Indigenous nations front-and-centre — but Hayden King, executive director of the Indigenous think-tank Yellowhead Institute, called the specifics of their reconciliation plan “a mess.” Robert Jago, a prominent Indigenous writer, took the Greens to task for their “foundational policy document” and some of their positions on Indigenous issues. Their response was defensively dismissive.

The Greens took in as a candidate Paul Manly after he was rejected by the NDP as a candidate because, he says, of comments he made in defending his father who was arrested by Israeli forces in 2012 while delivering supplies to Gaza. But May continues to distance the party from the Boycott, Divestment and Sanctions movement, which seeks to end Palestinian oppression and occupation by Israel, while falsely suggesting the movement is inherently anti-Semitic.

May announced a plan to support oil and gas workers transitioning to renewable energy jobs. But in B.C., the provincial Greens recently blocked a proposal that would have made it easier for precarious workers to unionize, and with the BC Liberals blocked a law that would have eased restrictions on legitimate construction unions’ ability to raid members from employer-friendly organizations — inviting charges of anti-worker bias in the party.

The Greens’ platform promised pathways to permanent residency and citizenship for migrants. In an election where immigration has become a proxy for race — around 40 per cent of Canadians think too many immigrants entering the country are not white — it was a heartening sign. But unlike the NDP, which has promised to end carding by federal police agencies, the Green platform is otherwise conspicuously lacking in specific commitments to combat racism.

There have been a lot of racist comments and acts by Green candidates this time around. In August, the Greens welcomed Quebec MP Pierre Nantel after he was turfed from the NDP; Nantel had, in 2017, questioned NDP Leader Jagmeet Singh’s “compatibility” with Quebec values, because Singh wears a turban. Last month, the Greens welcomed the federal NDP’s former executive member for Atlantic Canada, in New Brunswick, who defected while saying voters were too racist to elect Singh.* It was the same week that the Green candidate for the Ontario Bay of Quinte riding said that he considered discussion of white supremacy a “distraction” from the issue of climate change. The Greens meanwhile lag behind even the overtly bigoted People’s Party of Canada in their number of racialized candidates — just 12 per cent of 325 Green candidates are not white.

Seeing the Greens flail rather than find consistency on key social issues gave me a sense of déjà vu. I began to resonate with my friend Daniel Karasik who, in response to news that May wouldn’t stop Green MPs from reopening the abortion debate on abortion, tweeted: “Turns out you can put ‘eco-’ in front of virtually any politics.”

When May unveiled her party’s platform last month, she announced it “tells Canadians we’re certainly not a one-issue party.” But less than two months earlier, she said that in the event of a minority government, she’d be willing to throw her party’s support behind the Conservatives if they backed down on opposing the carbon tax.

On everything from the United Nations Declaration on the Rights of Indigenous People to immigration, Conservative policies would threaten the lives of many already vulnerable people. Would the Green leader really be willing to ignore all of these positions?

The reality is that the Green Party’s most incontrovertible stance — and the only one they haven’t yet contradicted through their actions — is environmentalism. And environmentalism on its own ain’t shit.

That’s why we fight for climate justice instead.

When refugees fleeing Hurricane Dorian-ravaged Bahamas weren’t allowed to evacuate if they didn’t have a U.S. visa, climate justice was about migrant rights.

When the Alberta Federation of Labour fought to make sure that the Alberta government gave workers adequate support through the coal phase-out, climate justice was about workers’ rights.

When the RCMP invaded the unceded territory of the Wet’suwet’en so the Liberal government could force through a pipeline, climate justice was about Indigenous sovereignty. 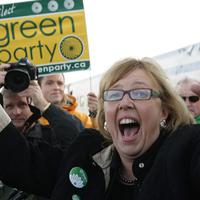 For this Progressive, the Greens Speak to the Heart

That’s because we can’t just shut down pipelines and go home expecting the climate crisis to turn around — not when solar and wind power still means mining rare earth metals abroad, when climate refugees are already fleeing destruction in the Global South, and when corporations stand to make a killing on privatized renewable energy.

Despite their pretty words, the Greens are still, at their core, a single-issue party. Unless they’re unabashedly standing up for the rights of marginalized people, they cannot be trusted to advance a leftist agenda.

Climate change isn’t simply an environmental phenomenon, but a political and social one — and environmentalism alone isn’t enough to protect our future.

*Story updated at 10:40 a.m. on Oct. 17 to correct that Jonathan Richardson was the federal NDP’s executive member for Atlantic Canada before jumping to the Greens and not an NDP MLA in New Brunswick.