[Editor’s note: Tyee contributing editor Andrew Nikiforuk will be participating in a climate strike today in Campbell River on Vancouver Island. Here’s what he plans to say.]

Covering Climate Now is a worldwide network of over 300 publications, as well as many journalists and organizations, committed to covering the climate crisis with urgency and high journalistic standards. Members have pledged coverage all this week leading up to the United Nations Climate Action Summit in New York on Sept. 23. For more on who originated the initiative, who else belongs, and why The Tyee was early to join, click here.

Our challenge is a perilous one. Emissions from our energy spending have destabilized our climate. This carbon pollution is warming and acidifying the ocean, the cradle of life. Some models show carbon dioxide has a half-life of 10,000 years. That means that the climate crisis could last 10,000 years. Many of its effects are irreversible and not immediately “fixable.”

There is only one solution, and it’s radical and difficult: we must spend less energy.

But more than one crisis now knocks on our door. Many democracies are failing as their struggling economies increasingly serve the one per cent. Our technologies have become tools of surveillance and manipulation. Our ravenous consumption of things is driving the extinction of birds, mammals, insects and fish. And Indigenous people.

The next thing is vote. Vote only for those politicians or parties that acknowledge the seriousness of the emergency and its complexity.

Voting, however, is not enough. We must also focus on our local communities, because that is where we can make the greatest difference. And here we have two tasks: to prepare for the oncoming economic and political storms, and to build a hybrid economy less dependent on fossil fuels.

Islands can be leaders on both fronts. They have stronger communities, and their rural agrarian economies are not as energy intensive as other places. All change begins on the margins of civilization.

Eleven years ago, the 4,000 residents of Samsø, Denmark, were told it was impossible to go green. But they put up 21 wind turbines and solar panels and now export energy to the mainland. The island is now 100-per-cent self-sufficient and has a negative carbon dioxide footprint of minus 3.5 tonnes per resident.

The status quo told the farming community that they could never do that. But the farmers of Samsø did it, because they had the flexibility to act. They also invested in the change they wanted to see.

Twenty years ago, the 21,000 residents of the Orkneys off Scotland’s coast got tired of paying high energy bills and importing fossil fuels. Today, they are at the centre of an energy revolution.

They too now export electricity to the mainland. They use electricity generated by wind turbines to power an electrolyser. The electrolyser splits water atoms into hydrogen and oxygen. The hydrogen can be stored and used as a fuel to power the local ferry.

To solve the irregular nature of wind and solar energy, the Orkneys are now developing a system called ReFLEX (responsive flexibility).

It will use community owned electric cars and Tesla batteries to store energy when it flows to be used when it is needed. And they are experimenting with tidal and wave power.

Community vision and community power fuelled the changes in Samsø and the Orkneys. The model was disruptive and collaborative. Community and local businesses teamed up with green energy companies. They also treated energy spenders (or what we call consumers) as part of the solution. A registered charity, Community Energy Scotland, played a major role in the Orkneys with getting things started. We need a Community Energy Vancouver Island, and we don’t have to wait for politicians to start one. 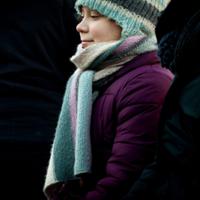 Why Should You Climate Strike on Friday, Sept. 27?

We also must be the change we want to see. Learn a practical or traditional skill. Travel less. Take a first aid course. Plant a community garden. Build your tribe. Watch over a river and its salmon. Strengthen your family. Reduce your dependence on gadgets and conveniences. Plant lots of trees. Support the creation of a Community Energy Vancouver Island charity. Prepare for a volatile economic and political future.

Pericles, the great leader of Athens, once said that a good citizen “knows the meaning of what is sweet in life and of what is terrible, and then goes out undeterred to meet what is to come.”

That is how we must live: undeterred. Protest that endures, says the social critic Wendell Berry, is “moved by a hope far more modest than that of public success: namely, the hope of preserving qualities in one’s own heart and spirit that would be destroyed by acquiescence.”